Russia can make Greece prospering state in one year

Two years ago, Greece missed the chance to extricate from the crisis with Russia's help. Nowadays, Russian investments in the country grow and give air to breathe to economies of several regions of Greece, such as the north-east. Russian investors are especially attracted by cheap real estate, tourism and the property that they can buy from the state. 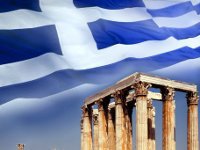 "Greece should only give Russia the green light, and the Russian money will come," said Ivan Savvidi, a businessman and the president of the Association of Greek Public Organizations of Russia said. "If Greece asks Russian business, I can tell you that by October next year, Greece will become a prosperous country," the BBC quoted Savvidi, a former deputy of the Russian State Duma.

"Russia has never turned its back on Greece in a thousand years, and, of course, it will not now," the official said.

According to Savvidi, the Greek government has once missed a historic opportunity to get out of the crisis with Russia's help. "Two years ago, when George Papandreou (former Prime Minister) met with Vladimir Putin, the Russian side was ready to help, but Athens did not raise the issue," Savvidi said.

Why wasn't Greece ready? Prominent German politician of the CDU, Armin Laschet, tried to answer this question. According to him, Greece's exit from the euro zone "may lead to instability in NATO member states. Russia is ready to help Greece with its billions should the scenario continues to develop," Laschet told Reuters. "There is much more at stake here than just a question of whether Greece meets the criteria of EU's bailout plan."

However, despite the absence of political will on the part of Greece, Russian investments in the economy of the crisis-stricken nation grow. First, it is tourism that Savvidi called "the oil pipe of Greece." Eleftherios Meletlidis, a hotelier in the area of Mount Athos, told the BBC that the number of tourists in the region had increased tenfold since 2002. "The Russian market is huge. The Russians practice  Orthodoxy, they love Greece. The proximity to Mount Athos is the key, as the Russians are very religious, at a much greater extent than the Greeks."

According to Russia-Greece Chamber of Commerce, tourists from Russia - 1.7 million people last year - leave a lot of money in the country - about $ 2 billion. About 7 percent of Russians come with a wish to buy real estate. For example, last year there were 31,000 such transactions registered. "The Russians have a strong interest in acquiring land, businesses and real estate," said Grigoris Tassios, the chairman of the Association of Halkidiki Hotels in the north of the country.

According to him, Russian entrepreneurs have acquired eight hotels in four years. "But the Russians are tough negotiators. They know that the market is depressed and therefore request a 30 percent discount on everything that catches their interest," he added.

It should be noted that the Greek real estate market is not in the first priority of the Russians - it takes only the 15th position. The second Greek-Russian forum on real estate, which was held in Athens on October23-24, unveiled the following numbers. Russians prefer to buy property in Italy (35 percent), Bulgaria (15 percent), the U.S. (12 percent), Czech Republic (9 percent), Spain (8 percent), Turkey (3 percent), Greek portal Imerisia.gr. wrote.

The President of the federation of Russian brokerage firms, Anna Lupashko, reported that in Greece, Russian customers look for real estate ranging from 100 to 200 thousand euros for personal recreation. She described an average Russian investor. This is a businessman aged 30-45, married, with children, concluding his or her deal for the first time. He or she wants to spend around 150,000 dollars (56 percent). As many as 13.6 percent buy homes within 500,000 dollars in the countries such as the UK, Italy and France). They buy mostly new apartments (55 percent), and are not interested in real estate property under construction.

The Russians also look for a mild climate (71 percent), friendly attitude of people (44 percent) and investment opportunities (40 percent). All of this they can find in Greece. In addition to tourism and real estate, the Russian business is ready to invest in the infrastructure and industry of the country. To implement the recommendations of the IMF, ECB and EU, the Greek government widely privatizes state property in order to replenish its liquidity. A Russian investor has bought a controlling stake in the state-controlled Dodoni dairies and a port complex in Thessaloniki. Gazprom is interested in buying DEPA gas company; Russian Railways monopoly is interested in unprofitable Greek railways.

Despite Greece's membership in the EU and NATO, the country's friendship with Russia has many years of fine traditions. Count Ioannis Kapodistrias, a Greek diplomat and foreign minister of the Tsarist Russia, was elected in 1827 the first President of Greece (after the country became independence from the Ottoman Empire).

During the Greek National Liberation Revolution in 1821 - 1829 years, the "Russian party" that was representing the Peloponnesian Greeks was primarily responsible for the armed struggle against the Turks on land. Russia's influence has not been lost in the areas where Russia was fighting against the Ottoman Empire. This influence grows through investments from both private and state Russian businesses and can be much bigger if the Greek government has the political will for it.