Russia takes on the offensive in the East 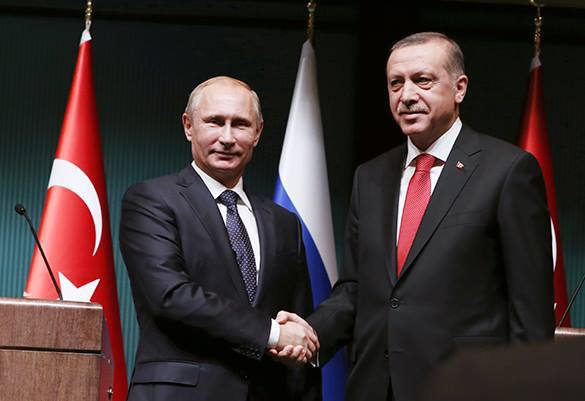 Russia's eastern vector of development takes more visible and clear outlines. After visiting China, President Putin paid a visit to Turkey; Putin also plans visits to Egypt and India. Russia should have stopped pulling the rope with the EU about the construction of the South Stream long ago. In a nutshell, Russia should proceed from defense to offense on the political field.

Noteworthy, Turkish PM Recep Erdogan, when visiting Tehran, changed his rhetoric on the Syrian conflict and expressed interest in cooperating with Iran. As he said, "one of our greatest misfortunes is the shortage of oil and natural gas." Russia should have taken this "misfortune" into consideration a long time ago. The deed has finally been done now, to mutual benefit. Russia has provided support for the growing Turkish economy with its energy resources and showed Europe its place. Many European officials believed that Russia would never refuse from the South Stream project, given the five-billion-dollar investment. They were hoping that it would be possible to blackmail Russia with the "Third Energy Package" endlessly. Probably, Putin was waiting to see how Erdogan's political career was going to develop. As soon as it became clear after the presidential election that his position was  unshakable, the Russian administration made the right decision.

Following Putin's statements about the reorientation of the South Stream, some Bulgarian officials assumed that it was a bluff. Russia will not give up the South Stream, said Martin Dimitrov, Vice President of the Energy Committee of Bulgaria. "This is a game, a tactical move of Putin, who tries to put pressure on Sofia and the EU," Nova News quoted the official as saying. According to Dimitrov, the gas pipeline via Turkey is much more expensive - two, or maybe even three times as expensive - that will make it economically unprofitable and inefficient. Turkey already has one pipeline - the Blue Stream, and there are big doubts about the effectiveness to build a second one, Dimitrov said.

As for the second pipe, it will ship only 14 of 63 billion cubic meters of Russian natural gas. The rest will be delivered to those who will want to buy fuel. "We will direct our energy flows to other regions of the world and accelerate the implementation of projects for liquefied natural gas," Vladimir Putin said after his meeting with Erdogan.

It is interesting to find out whether the South Stream project has been closed completely, or if it was the Bulgarian part of it that was shut down. Bulgaria was the only one of participating countries that refused to implement the project, having succumbed to the pressure of Brussels. "The project, in the format in which it existed, has been shut down completely, - Anton Shabanov, an independent economic expert told Pravda.Ru. - It will be a completely different project under entirely different economic and geographic laws. It will be a completely new mechanism," he added.

The second question is about considerable economic losses from the reorientation of the pipeline to the east, via Turkey, as one will have to bury $5 billion for that. "The production cost of our natural gas is much lower than the price, at which we sell it. Russia will never sell it at a sacrifice. In this respect, this is the profit that has been lost. However, due to the fact that we have new sales markets, we will definitely benefit from this," Gennady Schmal, President of the Union of Oil and Gas Industrialists of Russia told Pravda.Ru.

This agreement is of paramount importance from the political point of view. Against the background of discord regarding the Crimea, Turkey has confirmed its line not to support anti-Russian sanctions. This suggests that Putin has to deal with a predictable and reliable partner. Turkish President Erdogan can count on reciprocity too. Putin said that Moscow was ready to further reduce the cost of gas for Turkey as a strategic partner. Russian-Turkish cooperation rests on a solid turnover and the enormous flow of Russian tourists to Turkey. Turkey maintained its reputation as a global player, but Bulgaria failed to prove its sovereignty. The Bulgarians try to put a good face on a bad game.

"If Putin refused to build the South Stream, it means that the EU has protected its rights and interests. It also means that the EU observes the Third Energy Package on its territory, - political analyst Ognyan Minchev said in an interview with "Hello, Bulgaria" TV program. - For Europe, the end of the South Stream project is good news, because it shows that laws in the EU are being observed."

"This is nothing but lick-spitting, - Veniamin Vutyanov, an expert on economic security at the Academy of the Russian President told Pravda.Ru. - This is common political chatter, which shows the commitment of Bulgarian experts and government officials to the common European course. For the Bulgarians, this does not come as a surprise, they expect to step into the eurozone. There are no objective economic grounds in the statement about the norms of the Third Energy Package. This whole project has not been finished, it still remains under development.

The EU puts pressure on Bulgaria saying that this is an underdeveloped agricultural state, that the economy of Bulgaria does not meet the requirements that are necessary to enter the eurozone. This leverage is activated when Bulgaria tries not walk the path of European policy in specific practical situations, such as the case of the South Stream project.