Why the US will lose the soft-war 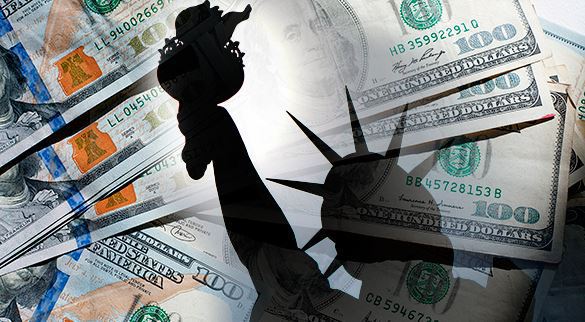 Do not be to taken in by all the apocalyptic news coming out of the western press about Russia's economic demise. If this journalist's memory still serves him the country produces some pretty good chess players, engineers and mathematicians.

Yes, the Russian economy is on a bumpy toboggan ride downhill having to deal with a shrinking GDP, devalued ruble and high inflation. But so what - is the rest of the world picking golden apples off the tree of unending prosperity?

In fact, of late the IMF has been warning that the world appears to be stuck in permanent stagnation.

This would appear to be the case since virtually all of the recent economic indicators worldwide are pointing downward. Russia has no reason to don the dunce cap and sit in the corner to be flogged by dart-throwing propagandists, opponents that are pushing for the collapse of the country.

Has the Euro not also been slashed in value along with every other currency versus the dollar?

The US debt is now 106% of GDP, whereas Russia's is closer to 15% so who comes out of the next crash in better shape? The globalist movers and shakers -- the western bankers at the apex of world's financial system -- have chosen to make their minions portray the half-empty side of Russia's glass.

However, nobody in the international financial world, in their right mind, believes that America will ever be able to repay its national debt, so why is the dollar on a tear? For the very same reason the ruble's value has been slashed, geopolitics.

There are a number of key variables that go into determining the relative value of a currency. Those include debt levels, inflation, unemployment, monetary policy and balance-of-trade among them. The latter is another key factor which shows that Russia's cup is half-full, not all empty.

Russia runs regular trade surpluses primarily due to high exports of commodities like crude oil and natural gas. Now contrast that to America and even Japan. The US is not only noted as the world's largest debtor nation but also the biggest trade deadbeat.

America has been running consistent trade deficits since 1976.

Normally, a country would not be able to pull this off as its currency would get devalued to the point that import prices would soar. However, the formation of the petrodollar in the 1970's made it the worlds, de facto, reserve currency which has kept demand for it artificially high.

The ruble was chocked, but it is rebounding

That is the geopolitical factor at work offsetting the real underlying weakness of the dollar. Japan had, like Russia, run trade surpluses for decades until 2013 when it racked up its first trade deficit, which it did again last year. With a 240% debt to GDP ratio and a growing negative trade imbalance, the yen is also a very weak currency with no fundamentals to prop it up.

The ruble was choked over the last 12 months but it is rebounding. It has some strong fundamentals supporting it.  Unlike the central banks of the US, Japan and the Euro-Union, their Russian counterpart is not printing money like a half-comatose methamphetamine addict in desperate need of a constant fix.

Even Russians seem to be caught in the negative perception trap that the global elite have set for the nation's collective identity. Yes, there is high inflation, yes the ruble crashed and yes the economy is shrinking, all true.

Okay, we should add that the price of oil has also collapsed.

But shift the perspective for a moment. Perhaps the Moscow strategist's saw the writing on the wall years ago. Russia is pursuing a pathway opposite to that of the rest of the world. Instead of zero interest rates it has high interest rates. What does that do?

It attracts capital, supports the ruble and it squeezes financial bubbles out of the system. In addition, it deleverages debt and imposes a level of national austerity.

As noted above, instead of drowning in red ink Russia has a low national debt, a positive trade balance and ample foreign reserves. Most other nations are just the opposite. They continue to go deeper into debt and spend money they don't really have. Soon that party end.

The rest of the world is one big financial bubble

The rest of the world is one big financial bubble waiting for a pin -- some kind of 2008 type of trigger-- to pop it. Could the brain trust in Moscow have seen this all coming? (Do bears poop in the woods?)

The world was told that Russia was threatening to sell its US treasury holdings only after the events in Ukraine occurred. In fact, they started selling them off in 2011, and slowly but steadily have unwound their share of US debt obligations over the past 4 years.

This insulates Russia from any kind of US financial shock.

Note that in 2011 commodities prices peaked and have been declining ever since. In spite of what western economists (cheerleaders) have been saying about their being a recovery, that is only due to smoke and mirrors manipulations of statistics.

There has not been any global recovery, ask any ordinary, working person in America or Europe or Brazil or Canada or the UK and so on.

Oil was simply the last commodity to fall. Even more interesting this also happened before the crash of '08. Now in this context we see Russia's behavior has a lot of common sense to it.

What has really been going on? And why does it feel like our world governments are asking us to suspend the laws of physics, economics and common sense? The short answer: a soft- war of the almost imperceptible, financial kind.

The brain-trusts in Russia and China saw what happened in 2001 and 2008 and decided that they were not going to idly watch a 2015 rerun. The western propaganda machine always casts every financial collapse as being caused by random events. These accidents they claim just came out of nowhere; however that is false imagery, propaganda in short.

The global, financial elite engineered both of those collapses. The FED, central bankers in general, eased the credit reins and pumped up bubbles first in the dot.coms and then in real estate derivatives. At least that is the generally accepted narrative.

Be that as it may, the end result was financial collapses and recessions. Why should it be any different this time around? The stock and bond markets are the current bubbles. There is no reason they won't follow the path of commodities and fall off a cliff, they will.

It will happen when the rest of the world wakes up and realizes that Russia and China are serious about ditching the petrodollar. The US has essentially dug its own grave on this score by pressing forward in Syria and the Ukraine and also encircling China militarily.

Add to this the madmen in the FED and other central banks futilely trying to pump up their economies now for 6 years by printing money. In reality, this is just a Ponzi scheme to transfer wealth to the privately held central banksters like the FED.

Why should Russia and China finance the debt of a country that considers them the enemy? They would be dumb to do so and they are not stupid by any stretch. China has also been dumping treasuries, albeit, fairly slowly given its massive holdings. In addition, both countries have been net purchasers of gold for years now.

Though the western propaganda machine casts these actions as aggressive attempts to destroy the dollar, the FED has shown it needs no help with that task.

The Russian and Chinese leaders are simply doing what they have to do to protect their own countries; and being flooded in petrodollars and US debt obligations runs counter to that aim.

Enter the final stages of the soft-war, i.e., skirting around the petrodollar when selling or buying oil, creating an alternative to the World Bank.

The petrodollar, fiat currency, western central bank conspiracy has been the biggest financial scam in history. But now the BRICS are putting their foot down, no more silly games, no more turning most of the planet's population into sweat- shop serfs.

The currents running beneath the waves we see on the surface are changing. There is a fiat to non-fiat currency shift that is in motion. Accompanying that is the replacement of an un-backed reserve currency, the dollar, with one that will be backed by gold.

At this point in time we are in maximum instability and chaos but there is an attempt to restore the historical equilibrium in the works. There is a reason that even US allies joined China's new bank. A gold backed reserve currency comes with automatic restraints built into it.

Nobody really appreciated the monopoly the US has had on international trade due to the fiat petrodollar. The new system will at least give the global community some semblance of a level playing field.

The US and Europe know they are losing their grip; another empire is fading into the sunset. But the future is by no means guaranteed. The chaos and carnage we see in various countries are all a part of the western financial elite's desperate attempt to keep the status quo intact at any cost.

Unfortunately the soft, financial war could become a shooting war...