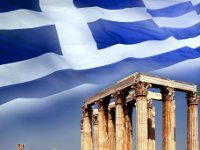 Greece and the troika (the International Monetary Fund, the EU, and the European Central Bank) are in a dangerous game of chicken. The Greeks have been threatened with a "Cyprus-Style prolonged bank holiday" if they "vote wrong." But they have been bullied for too long and are saying "no more."

A return to the polls was triggered in December, when the Parliament rejected Prime Minister Antonis Samaras' pro-austerity candidate for president. In a general election, now set for January 25th, the EU-skeptic, anti-austerity, leftist Syriza party is likely to prevail. Syriza captured a 3% lead in the polls following mass public discontent over the harsh austerity measures Athens was forced to accept in return for a €240 billion bailout.

Austerity has plunged the economy into conditions worse than in the Great Depression. As Professor Bill Black observes, the question is not why the Greek people are rising up to reject the barbarous measures but what took them so long.

Ireland was similarly forced into an EU bailout with painful austerity measures attached. A series of letters has recently come to light showing that the Irish government was effectively blackmailed into it, with the threat that the ECB would otherwise cut off liquidity funding to Ireland's banks. The same sort of threat has been leveled at the Greeks, but this time they are not taking the bait.

Squeezed by the Squid

The veiled threat to the Greek Parliament was in a December memo from investment bank Goldman Sachs - the same bank that was earlier blamed for inducing the Greek crisis. Rolling Stone journalist Matt Taibbi wrote colorfully of it:

The first thing you need to know about Goldman Sachs is that it's everywhere. The world's most powerful investment bank is a great vampire squid wrapped around the face of humanity, relentlessly jamming its blood funnel into anything that smells like money. In fact, the history of the recent financial crisis, which doubles as a history of the rapid decline and fall of the suddenly swindled dry American empire, reads like a Who's Who of Goldman Sachs graduates.

Goldman has spawned an unusual number of EU and US officials with dictatorial power to promote and protect big-bank interests. They include US Treasury Secretary Robert Rubin, who brokered the repeal of the Glass-Steagall Act in 1999 and passage of the Commodity Futures Modernization Act in 2000; Treasury Secretary Henry Paulson, who presided over the 2008 Wall Street bailout; Mario Draghi, current head of the European Central Bank; Mario Monti, who led a government of technocrats as Italian prime minister; and Bank of England Governor Mark Carney, chair of the Financial Stability Board that sets financial regulations for the G20 countries.

Goldman's role in the Greek crisis goes back to 2001. The vampire squid, smelling money in Greece's debt problems, jabbed its blood funnel into Greek fiscal management, sucking out high fees to hide the extent of Greece's debt in complicated derivatives. The squid then hedged its bets by shorting Greek debt. Bearish bets on Greek debt launched by heavyweight hedge funds in late 2009 put selling pressure on the euro, forcing Greece into the bailout and austerity measures that have since destroyed its economy.

Before the December 2014 parliamentary vote that brought down the Greek government, Goldman repeated the power play that has long held the eurozone in thrall to an unelected banking elite. In a note titled "From GRecovery to GRelapse," reprinted on Zerohedge, it warned that "the room for Greece to meaningfully backtrack from the reforms that have already been implemented is very limited."

Why? Because bank "liquidity" could be cut in the event of "a severe clash between Greece and international lenders." The central bank could cut liquidity or not, at its whim; and without it, the banks would be insolvent.

As the late Murray Rothbard pointed out, all banks are technically insolvent. They all lend money they don't have. They rely on being able to borrow from other banks, the money market, or the central bank as needed to balance their books. The central bank, which has the power to print money, is the ultimate backstop in this sleight of hand and is therefore in the driver's seat. If that source of liquidity dries up, the banks go down.

The Biggest Risk is an Interruption of the Funding of Greek Banks by The ECB.

Pressing as the government refinancing schedule may look on the surface, it is unlikely to become a real issue as long as the ECB stands behind the Greek banking system. . . .

But herein lies the main risk for Greece. The economy needs the only lender of last resort to the banking system to maintain ample provision of liquidity. And this is not just because banks may require resources to help reduce future refinancing risks for the sovereign. But also because banks are already reliant on government issued or government guaranteed securities to maintain the current levels of liquidity constant. . . .

In the event of a severe Greek government clash with international lenders, interruption of liquidity provision to Greek banks by the ECB could potentially even lead to a Cyprus-style prolonged "bank holiday". And market fears for potential Euro-exit risks could rise at that point. [Emphasis added.]

The condition of the Greek banks was not the issue. The gun being held to the banks' heads was the threat that the central bank's critical credit line could be cut unless financial "reforms" were complied with. Indeed, any country that resists going along with the program could find that its banks have been cut off from that critical liquidity.

That is actually what happened in Cyprus in 2013. The banks declared insolvent had passed the latest round of ECB stress tests and were no less salvageable than many other banks - until the troika demanded an additional €600 billion to maintain the central bank's credit line.

That was the threat leveled at the Irish government before it agreed to a bailout with strings attached, and it was the threat aimed in December at Greece. Greek Finance Minister Gikas Hardouvelis stated in an interview:

The key to . . . our economy's future in 2015 and later is held by the European Central Bank. . . . This key can easily and abruptly be used to block funding to banks and therefore strangle the Greek economy in no time at all.

That was the threat, but as noted on Zerohedge, the ECB's hands may be tied in this case:

[S]hould Greece decide to default it would mean those several hundred billion Greek bonds currently held in official accounts would go from par to worthless overnight, leading to massive unaccounted for impairments on Europe's pristine balance sheets, which also confirms that Greece once again has all the negotiating leverage.

Despite that risk, on January 3rd Der Spiegel reported that the German government believes the Eurozone would now be able to cope with a Greek exit from the euro. The risk of "contagion" is now limited because major banks are protected by the new European Banking Union.

The banks are protected but the depositors may not be. Under the new "bail-in" rules imposed by the Financial Stability Board, confirmed in the European Banking Union agreed to last spring, any EU government bailout must be preceded by the bail-in (confiscation) of  creditor funds, including depositor funds. As in Cyprus, it could be the depositors, not the banks, picking up the tab.

What about deposit insurance? That was supposed to be the third pillar of the Banking Union, but a eurozone-wide insurance scheme was never agreed to. That means depositors will be left to the resources of their bankrupt local government, which are liable to be sparse.

What the bail-in protocol does guarantee are the derivatives bets of Goldman and other international megabanks. In a May 2013 article in Forbes titled "The Cyprus Bank 'Bail-In' Is Another Crony Bankster Scam," Nathan Lewis laid the scheme bare:

At first glance, the "bail-in" resembles the normal capitalist process of liabilities restructuring that should occur when a bank becomes insolvent. . . .

The difference with the "bail-in" is that the order of creditor seniority is changed. In the end, it amounts to the cronies (other banks and government) and non-cronies. The cronies get 100% or more; the non-cronies, including non-interest-bearing depositors who should be super-senior, get a kick in the guts instead. . . .

Even in the worst of the Great Depression bank bankruptcies, said Lewis, creditors eventually recovered nearly all of their money. He concluded:

When super-senior depositors have huge losses of 50% or more, after a "bail-in" restructuring, you know that a crime was committed.

Greece can regain its sovereignty by defaulting on its debt, abandoning the ECB and the euro, and issuing its own national currency (the drachma) through its own central bank. But that would destabilize the eurozone and might end in its breakup.

Will the troika take that risk? 2015 is shaping up to be an interesting year.

Ellen Brown is an attorney, founder of the Public Banking Institute, and author of twelve books including the best-selling Web of Debt. Her latest book, The Public Bank Solution, explores successful public banking models historically and globally. Her 200+ blog articles are at EllenBrown.com.