Experts are expecting a recession in China along with a new wave of the economic crisis. They say that the next two years may become critical for both China and the global economy. The growth of the Chinese GPD is caused by financial bubbles that can burst and bring the country into a recession followed by a global economic crisis, reports Nezavisimaya Gazeta. 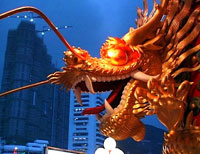 According to cautious forecasts of the experts and international organizations, the world is gradually coming out of the crisis thanks to China, whose economy became a locomotive of the world’s revival. China is growing its own industrial sector and increasing raw materials purchasing, while stimulating the world trade and manufacturing. Independent experts warn that Chinese growth is explained by numerous bubbles that continue to blow up in different spheres of the world’s second largest economy.

Analysts think that there are at least six dangerous bubbles in the Chinese economy. First, the exchange rate of the national Chinese currency to the US dollar is very low and does not reflect China’s trade situation. Second, the excessive monetary funds caused by enormous programs aimed at the economy stimulation and necessity in printing more yuans to preserve a low rate of the national currency against the currency of China’s trade partners is a negative factor. Third, excessive crediting, especially in residential and infrastructure construction, presents an issue.

As a result, by the end of 2009 the total volume of commercial loans in China was 40 trillion yuans, or 5.85 trillion dollars, which is 32% higher than in the end of 2008, and 20 times higher than in 1992. Fourth, mass interest in the stock market is an issue. In particular, the number of opened broker accounts is nearing the total population of Russia, increasing by 300 to 350 thousand every week.

Mismatch of purchases and end consumption of raw materials in the country is alarming. There has been an opinion in stock markets that it is Chinese demand in raw materials that causes continuous rise in prices. Yet, raw materials purchased by China are the same as speculation on the rise as transactions of American traders in the futures’ market. It has to do with the fact that significant limitations in financial balance operations caused by complications with the export of capital make China invest in raw materials under the pretence of purchases for business purposes (fifth bubble).

Additionally, the experts mention that the rise in real estate prices in China is close to 10% a year, which is not that much according to the Russian standards, but is much higher than the inflation in the country (sixth bubble).

Russian analysts differ in their opinions regarding a possibility of a new financial crisis. According to Sergey Smirnov, deputy director of the Center for Development of the State University — Higher School of Economics, nothing bad is expected from the Chinese economy in short term and mid-term plans. “First of all, because China is going through the industrialization stage which is always marked by the increase in external and internal demand. This period will last another 20 to 25 years.“ On the other hand, many experts argue that the current improvement of the situation is hardly a sign of the end of the crisis. Most likely, it is a short break before a new wave. Chinese experts believe that if a new crisis is to happen, the threat would come from the US and not China.