Where is the truth about events in Ukraine?

In Ukraine, the situation exacerbates because of the actions of the interim government, the Verkhovna Rada and ongoing conflicts in the regions. The principle of portal Pravda.Ru is to give a voice to people of different beliefs. Here is a personal opinion from a journalist from Western Ukraine, Roman Shostak. 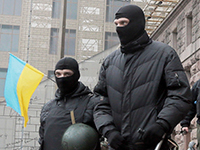 "What is happening in the field of information warfare? As far as I know, in Ukraine all Russian TV channels have been disabled, and all Ukrainian TV channels say that Russia has declared war on Ukraine."

"Actually, in Ukraine, there is no information war. In Ukraine, there is information protection. There are attempts of information warfare that Russia has been conducting for probably 20 years already. Today, Russian TV channels, according to reports from the Ukrainian press, are not accessible on 70 percent of the Ukrainian territory. As I understand it, they are pro-Kremlin channels that are engaged in propaganda, rather than journalism. Journalism is objective news, and propaganda is a psychological treatment of troops or the public enemy.

"We love Russian journalism, Rain TV channel, Echo of Moscow radio station, Novaya Gazeta newspaper, and other publications that try to meet the standards of journalism. Unfortunately, there are not many of them at all. When we felt in Ukraine that propaganda came instead of journalism, we took measures."

"You mentioned a number of Russian media, but they are doing the same type of propaganda, which you now say you do not like. Their propaganda, though, is directed solely against the state, in which they live and pay taxes. What is propaganda for you then?"

"For me, it is everything connected with lies and manipulations. Let us clarify: are we talking on the topic "Information warfare - Russia against Ukraine?"

"No, we are talking on the topic "Situation in Ukraine."

"We have long been accustomed to the fact that Ukraine is a separate state. Many years have passed, and a whole generation of Russians and citizens of Ukraine have grown up having this awareness. But then there was a situation, when the Russian-speaking population asked for help. Russophobia engulfed Ukraine,  and neo-Nazi slogans can be seen and heard from your television screens."

"First off, you said the Russian-speaking people ask for help. Who among Russian speakers in Ukraine asked for help? Let us step by step try to understand the concepts which you mentioned. First, former Ukrainian President Yanukovych requests Russian assistance, along with the former head of the Ukrainian Security Service Yakimenko, a former Minister ... Common Russian-speaking citizens do not ask for help! Moreover, they seek protection from such assistance, do you understand? Because all Russian-speaking people enjoy very good and comfortable life in Ukraine. They do not intend to participate in these imperial games that have all kinds of names ending in "ism".

"You know, a few months ago, it would never occur to anyone that Russia would be compared to Nazi Germany, and Putin would be likened to Hitler. Today, this seems to be normal."

"When was the last time you went there?"

"I do not know. Thirty years ago."

"The republic moved into the Russian Federation. The people were concerned about their situation. Do you think that they became a part of Russia, that they receive Russian passports solely because of the propaganda and because they enjoyed their comfortable life?"

"But I can not judge on the Crimea, because I have not been there and I do not know the situation in the Crimea well enough. But if we talk about the Crimea from the standpoint of international law, this is an attempt to revise the boundaries that were established after the Second World War. If you destroy the Helsinki Accords, it may trigger the domino principle."

"Do you think that what is happening in your land, in your country right now is normal? Where will this way take you?"

"It's very regrettable for me to know that according to opinion polls, three-quarters of today's Russia supposedly support the policy of the Kremlin and Putin. It's regrettable to know that in the event of a military conflict with Ukraine, they will support the government's actions. It's very sad for me. This is the saddest thing I've read lately. During 55 years of my life, I have perfectly distinguished between the Kremlin, Moscow, Russia and the Russian people. These are absolutely different things for me. We have always respected, and respect will respect the Russian people - the people, who had to survive one empire, second empires, third and fourth, one-headed and double-headed eagle. All that rests on the shoulders of the people. In this respect, the Russian and Ukrainian peoples are no different.

"Today's Russia and the Russian people fell into the trap of an ambitious political group of people, who impose an absolutely wrong way of development. Because any war between Russia and Ukraine is a disaster not only for Ukraine but also for Russia, maybe even for Europe and for the world. It will be very sad if in the G8, they will have China instead of Russia. In 2014, starting to celebrate the 100th anniversary of the outbreak of the First World War, we will finish to celebrate it in 2018 before the FIFA World Cup in Russia. It will be hard for us to endure four years of Informational Third World War during the years of celebration of the  anniversary of the First World War. Therefore, I think one should put all sort of propaganda aside."

"You're talking about pro-Kremlin media and the media close to the Kremlin. You are now on a Russian media publication. If you say that someone is biased here in Russia, tell us how to cover events in Ukraine correctly?"

"It should be very easy to do. You need to come to Lviv, and live here, for a week or two. And then take a seat here in the press center, contact your editors at Pravda.Ru and say: "Today, I will talk about what happened in Lviv instead of Roman Shostak."

"Well, I am not in Lviv, and Roman Shostak is on Pravda.Ru. What is happening in Ukraine?"

"The events in Ukraine are very simple. The Ukrainian people got rid of the criminal reign of the Yanukovych family and those who were with him. Now we are gradually returning to the state, in which we were before Yanukovych came - these are the times of oligarchic rule. There has not be a revolutionary or a democratic leap. But we are now preparing for the presidential election on May 25th, to restart power and continue to move slowly.

"Actually, nothing extraordinary has happened in Ukraine in terms of the 23-year-old history of Ukraine as a state. Maybe it may seem very surprising for the countries that do not have such democratic history. The simplest thing is that you have become a victim of post-Soviet propaganda, elementary post-Soviet propaganda that makes a mountain out of a mole hill. All the talk about Russophobia, Nazism and neo-Nazism seems ridiculous for the people of Ukraine."

"What are your predictions for the election?"

"I'm not a political scientist, but I think that it will either Poroshenko or Tymoshenko, who will win. Probably, no one from Party of Regions will win, even though they have the good of the party at heart in Moscow."