The invasion by ISIS of the Palestinian settlement of Yarmouk, in the southern suburbs of Damascus, has exposed serious divisions within the Palestinian leadership. An apparent agreement to confront the new crisis, with the Syrian Government, was rapidly disowned by the PLO leadership in Ramallah. 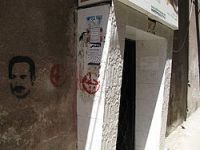 In the absence of a united Palestinian response it is highly likely that the Syrian Army, with allied Palestinian factions, will impose a 'security solution' to the area. This may mean near complete evacuation of the area and heavy bombardment. Only about 18,000 of the pre-crisis population of 160,000 actually remain inside Yarmouk.

PLO Executive Committee member Ahmed Majdalani on 9 April announced a joint Syrian and PLO response to the 'obscurantist terrorists' who had seized the camp. He said the Syrian leadership had been dealing with Yarmouk 'with a high level of sensitivity' given its special status and as it symbolically stands as the capital of Palestinian Diaspora'. Because of that sensitivity, there had been no 'security solution' so far. However all attempts at a 'political solution' had been aborted by the terrorist groups.

Within hours the PLO in Ramallah effectively washed its hands of the matter, saying that it refused to 'drag our people and their camps into the hellish conflict that is taking place in Syria'.  Yet some sectarian Palestinian groups bear great responsibility for the Yarmouk crisis.  They were the ones who invited Jabhat al Nusra snipers into Yarmouk, leading to Syrian Army security clamp-downs on the area.

Amal Asfour, member of the Palestinian National Assembly for Relief in Yarmouk wrote that the current crisis followed the 30 March assassination of Yahya Hourani (Abu Suhaib), leader of the Hamas aligned Aknaf Beit al-Maqdis (ABM). After that assassination, one of the factions of ABM arrested some ISIS aligned individuals, against the objections of former ABM allies Jabhat al-Nusra.

That prompted Jabhat al-Nusra to turn on ABM and organise the invasion with ISIS members from the al-Hajar al-Aswad and al-Takadom areas. The large ISIS group quickly seized the greater part of the now mostly depopulated Yarmouk settlement.

The Syrian Army, despite fighting on several fronts, quickly moved to contain the threat. Al Masdar reports that Palestinian reinforcements arrived from Jarmana camp, while the PLA and PFLP-GC captured more of Palestine Street. Meanwhile Syria's National Militia (NDF), backed by the Army, the PLA and the Druze militia, wiped out an ISIS group to the south, which had attempted to capture Tal Al-Khaldiyeh, in northwest As-Sweida.

News 786 reports that Palestinian militia in Syria have found Israeli ID cards 'on the dead bodies of some ISIS extremists'. This assistance from Israel is logical; there are many reports that Israeli Defence Forces have provided medical aid to al Nusra and other Islamist fighters, allowing them to cross the occupied Golan border.

Moe Salhi reports that sectarianism in the Hamas leadership has been at the root of the problem. Instead of staying out of the Islamist insurrection in Syria, the political leaders of Hamas, linked to the Muslim Brotherhood, facilitated engagement. 'They used all their techniques that had been taught by Syrians, Lebanese, and Iranians [tunnels, explosive devices] to use against the Israelis; they used it against Syrians!' says Salhi.

They then created the military faction called 'Aknaf Beit al-Maqdes' (ABM), supposedly for Jerusalem but deployed in Yarmouk. This group collaborated with Jabhat al Nusra, until recently, and avoided any relations with the Syrian Government, because it was 'infidel'. All this is consistent with the Muslim Brotherhood strategy of confronting the internal secular 'enemy' first, before facing the external enemy. However it has led to a disaster in Yarmouk.

According to Salhi, 'dozens of conciliation attempts had been rejected at the last minute because of the moody and elusive ABM militia, while blaming it on the 'murderer regime''. The Syrian Army at times had to 'quarantine' the Yarmouk area, when the al Nusra fighters penetrated the area, but they had also built agreements to allow Palestinian militia to keep control. The ISIS invasion may have destroyed that.

Salhi says, with the invasion, ABM fighters 'split into 3 factions': one joined ISIS, another 'resisted it and fought it', while a third 'surrendered to the loyal Palestinian parties ... and therefore, to the Syrian Army'. In this way ISIS dismembered ABM, taking down and trampling on the Palestinian flags and raising their own black flags.

Now that ISIS has this foothold on the doorstep of Damascus, the Syrian Army won't just quarantine it. There will definitely be a heavy assault on the ISIS held areas, when sufficient evacuation has taken place.  All this has been done before, in Homs and Qusayr.

Khaled Abdul Majeed, secretary general of the Palestinian militia fighting the extremists, said Palestinian fighters allied to the Syrian Army were 'not too interested in what the PLO leadership in Ramallah had to say about not entering the fray in Yarmouk'. Very few of those fighters were from Fatah, the largest PLO group, and only a few from ABM. The UNRWA was trying to get the civilians out and the Syrian Army was cooperating, but ISIS was preventing civilians from leaving the areas it controls.