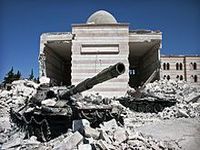 In Syria of ~ 22 million people as per reports ~ 250 thousands have been killed, 11 million have been displaced including 300 thousands in refugee camps of neighboring countries. Such human rights catastrophe in Syria (especially for women, children and old people) will bring global support (including from Sunni Muslims who form majority of population and Shias who support regime in Syria) for Putin in bringing peace to Syria which will also eradicate the problem of ISIS from Syria. Therefore even if formal support does not come from UN, Russia may go alone in bringing peace in Syria. But this mission will be supported easily by USA & its European and other Allies if Russia involves India into it.

Indian Involvement will be very useful because Syria only requires elections (after about six months during which electoral lists will be prepared after getting all the Syrians back at their place in Syria) under human rights friendly secular / Federal constitution with the help of  Peace Keeping Force (PKF) and Election Commission (EC) both under Russian control & command and provision of mandatory 'Party Lok Pal' (ombudsman) in political parties of Syria to be nominated by Russia / India.

It is evident that without deploying up-to ten million personnel for PKF & EC peace will not return to Syria (especially given the fact that ISIS and other terrorist organizations are also present in Syria and its neighboring countries). If India could provide ~ 2 million personnel to Britishers during World War I & II each there is no reason why present India of ~1.25 Billion people (with ~ 15 % Muslim population both Sunni & Shia) cannot provide up-to 10 million people to Russia in Syria [with ~ 40 % Muslims which will generate trust, confidence and goodwill in Syria and in all the Muslims countries (both Sunnis & Shias) especially in neighboring region of Syria].

If handled properly by Putin and Russian Ambassador in Delhi, Russia can easily get these up-to 10  million personnel from Government of India (GOI). Therefore Putin should ask Russian Ambassador in Delhi to approach GOI for sending Indian representative (in individual capacity or as leader of SAARC for this mission with other SAARC Country's representatives) in these April Moscow talks. For Russia there are two facility / advantage  in this arrangement. In addition to contribution by other countries (especially Muslim countries) Russian can easily bear the financial burden of this mission through petroleum oil which Russia nowadays has in plenty   Moreover Russia will get respite on Ukraine issue (due to goodwill it will generate globally for Russia) if Russia solves Syria problem.

It is pertinent to mention that India can give these up-to 10 million personnel to Russia through NGOs too, if GOI refuse to give these. If Russia can manage adequate funds, many Indian NGOs (present or new) can provide these up-to 10 million people (including majority of Muslims in it) to Russia for PKF & EC in Syria. Hence in case GOI shows reluctance then Russia should utilize its deep assets in India (of political parties, academicians, political, / strategic / defense commentators, Journalists, economists etc) to mobilize some NGOs (especially having base among Muslim community, which is pining to stop said human rights catastrophe of Muslims in Syria) to participate in this April Moscow talks  who (alone or combined not only from India but from other countries of SAARC too) will be able to mobilize these up-to 10 million personnel for Russia in Syria.

(Author of 'Betrayal of Americanism')