Syria and the West's stupidity

The same perpetrators of hundreds if not thousands of the most horrific scenes of torture in the illegal invasion of Iraq are now expressing horror at stories of human rights abuse in Syria, where the same perpetrators have been cavorting with terrorists, fomenting a civil war, then complaining when the authorities fight back. 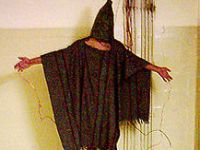 Just in case Messrs. Obama, Cameron, Hague and Kerry had not noticed, there are hundreds of armed groups running around Syria committing atrocities against the civilian population, against the fire service, against the Syrian police force, against the Syrian armed forces. One questions what the US and British authorities would do if the same sort of mayhem was unleashed upon their people.

Would the authorities stand back and do nothing? Or would they do what they did in detainee centres in Iraq? Has everyone forgotten the Great American heroine Lynndie England, the one who was "just having fun" torturing or posing with tortured Iraqi civilians in Abu Ghraib prison? Let us not forget that the cases of torture in Iraq number tens of thousands of cases and there are hundreds if not thousands of cases of abuse which were not investigated - the US and UK personnel were committing human rights atrocities long after the Abu Ghraib scandal, not in their own countries, but overseas. Let us not forget that the centre of human rights abuse in Cuba is the Guantanamo Bay concentration and torture camp where detainees have been held for years without due legal process. Is this what the USA and its poodles stand for?

And suppose we entertain the notion that without massive support from the West and from their disgusting lackeys in the Gulf, terrorist supporters such as Qatar and Saudi Arabia, then the Syrian "Opposition" would never have inflicted itself upon Syrian society and there would never have been a Syrian Civil War.

Let us also not forget who and what was behind the supposed chemical weapons attacks in Syria last August, which the west knew about, and which in some quarters were considered to be a valid action by the Syrian Opposition if they created a casus belli. Let us also not forget who the Syrian Armed Forces are protecting: Syria's civilian population.

Syria's civilian population - the women who have had their breasts sliced off in the street by the western-backed terrorists, the girls who have been gang-raped before or after decapitation, the boys who have had their heads torn off and used as soccer balls, the old men humiliated before their families, the bakers roasted in their own ovens for daring to bake bread and put food on the tables of innocent Syrian families.

So suppose the West got out of Syria, stopped creating civil wars in sovereign states, allowed the Syrian authorities to clean up the mess the West has started, and minded its own business?

As for excluding Iran from the peace talks in Geneva, after Iran was invited, just because Iran refused to come to the talks with a pre-conceived conclusion before the talks had even started, this speaks volumes about the West's absence of diplomacy, and says everything in favour of Teheran.

Surely, the sensible position would be to create an environment for the Syrian people to choose their own destiny - Syrian solutions for Syrian problems, by Syrians and for Syrians, not by America and its poodle States, whose own human rights record and history of intervention read like the worst type of terrorist manual.