Iranian nuclear bunkers to remain packed to the gills

US President Obama is very proud of his achievement - the agreement with Iran on its nuclear program. The White House called the agreement "historic." Yet, Iranian Foreign Minister looked very pleased while commenting on the agreement. Iran's nuclear program is a national idea of Iran, its shield and international reputation. The situation looks somewhat strange. 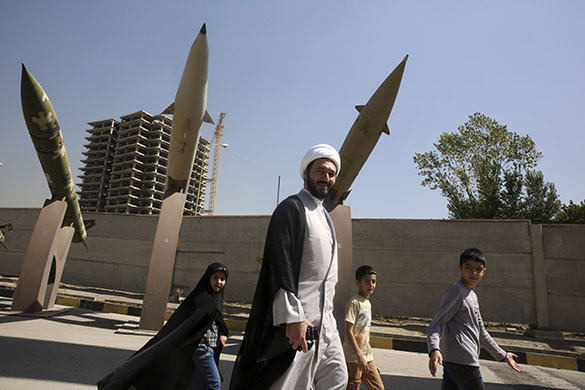 The agreement on limiting the Iranian nuclear program in exchange for a gradual withdrawal of international sanctions was signed on April 2 in Lausanne as pat of six-sided talks between international mediators (the US, Russia, China, Britain, France and Germany).

The essence of the agreement on Iran's nuclear program

In accordance with the agreement, Iran undertakes not to build new uranium-enrichment facilities for 15 years, to reduce the number of centrifuges three times and deliver the rest of them under the control of the IAEA. Iran agreed not to enrich uranium to a level of more than 3.67 percent for the period of 15 years, and pledged not to build new reactors with the use of "heavy water."

It is said that most of the enriched uranium is exported. Iran is allowed to keep only IR-1 first-generation centrifuges. For ten years, Iran will not be allowed to use new models of centrifuges for uranium enrichment purposes. IR-2M centrifuges available at Natanz are to be sent to a warehouse under the supervision of the IAEA.

Iran promises not to enrich uranium at Fordo for 15 years. The facility in Fordo will be used to establish nuclear physics research center.

Iran will either destroy or transfer to another country the plutonium production equipment of the factory in Arak. The country may also replace it with other types of equipment that does not allow to produce weapons-grade plutonium. All nuclear fuel that has been produced in Arak will be delivered to another country.

In response, sanctions from Iran will be lifted, albeit not immediately, but when the IAEA confirms that the requirements have been met.

It seems to be a flawless victory for Barack Obama, but why did the head of the Iranian delegation, Iranian Foreign Minister Javad Zarif, look so happy at the final press conference with EU Foreign Minister Federica Mogherini?

Israel Project (IP), a Washington-based human rights group, said that it was a Pyrrhic victory for US President Obama, because Zarif was boasting a lot during his speech. IP explains where the pitfalls are.

Firstly, Iran has not declassified the history of its nuclear program. Secondly, the Americans agreed to keep centrifuges in the underground bunker in Fordo. Thirdly, the Iranians were not obliged to remove all of the enriched uranium. Scientific works were not excluded either. To crown it all, the heavy water reactor at Arak will be modernized, according to Zarif.

According to the IP, the affirmations saying that centrifuges in Fordo will work on germanium and other non-nuclear materials are tricky. The purpose of the centrifuge is to spin, converting light isotopes into heavy ones, thereby enriching material. This is the only thing that centrifuges can do. The Obama administration started the debate, the winner of which can be found by typing "germanium enrichment centrifuge" on Google, IP said. Apparently, it means that there are no such centrifuges.

Israel tries to set the world against Iran

Centrifuges in Fordo are highly important, IP researchers say. At the facility in Fordo, according to Zarif, Iran keeps state-of-the-art centrifuges IR-4s, IR-5s, IR-6s and IR-8s. According to the Israelis, this will allow Iran to build a nuclear bomb within a year. Thus, the Iranian nuclear program in Fordo will remain outside the control of the West, says IP.

The fact that Zarif and Kerry gave their press conferences separately serve as an indirect proof of the above-mentioned conclusions, IP analysts believe. In addition, the announcement of the agreement was made only with the participation of a EU representative - Mogherini.

Noteworthy, at US Congress, the Republican majority and several influential Democrats are opposed to the "nuclear deal" with Tehran. According to many analysts, the "Congress factor" may disrupt the implementation of the agreements reached in Lausanne.

Iran has a long way to go to build nuclear bomb

"One must clearly understand that nuclear energy is a sister of a military program. Any country that has a nuclear industry may technically take it to the military level.  Iran is no exception at this point," Alexander Uvarov, President of Atominfo Center told Pravda.Ru.

According to the expert, it is the IAEA that should supervise the Iranian nuclear program. "There is a clear understanding that there must be tough and powerful control on the part of the international community that has a specialized body for the purpose - the IAEA. The IAEA is not a global intelligence service, but it is moving in that direction," the expert said.

"The part of the Israeli establishment that is associated with the sitting Prime Minister, Mr. Netanyahu, is very negative about the agreement. They have been parroting for years that Iran is secretly building a nuclear bomb. They will continue saying that in the future. However, as far as I know from my conversations with competent officials familiar with the problem, Iran still has many years to go to build something," Leonid Gusev, Senior Fellow at the Institute for International Studies at MGIMO told Pravda.Ru.