Notwithstanding the belligerence of its new president, Iran made an effort to show that they were ready to continue talks on the issue

Iranian nuclear program has become a headline topic of the international politics. The issue is discussed at all levels using a variety of formats e.g. multilateral forums and bilateral summits, meetings between foreign ministers. The issue holds the spotlight in the International Atomic Energy Agency, an organization set up specifically to ensure nonproliferation of nuclear weapons. By all appearances, the international community will not decide on the issue by the end of the next year. 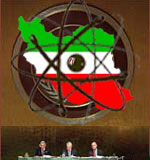 Two months ago the IAEA accused Iran of “numerous violations” with regard to non-proliferation and recommended to refer the “Iranian dossier” to the UN Security Council. The move may result in sanctions to be imposed on Iran. However, Iran got a two-month grace period before the next meeting of the Board of Governors of the IAEA.

Two months have passed, the grace period was over. The IAEA board convened again in Vienna only to have made the “final warning” to Iran. The referral of the case to the UN Security Council did not happen and one may wonder why, especially after the shocking statement by the new Iranian President Mahmoud Ahmadinejad who called “to wipe Israel off the map.”

Notwithstanding the belligerence of its new president, Iran made an effort to show that they were ready to continue talks on the issue. Iran announced its readiness to resume talks with Britain, France and Germany, the key three European countries negotiating with Iran. In the mean time, Iran also threatened to deny access to its nuclear facilities for IAEA inspectors if the issue is referred to the UN Security Council.

The above maneuvers of Tehran were not the only factors that led to a change of mood in the IAEA. The United States, Iran's main opponent, had realized that Russia and China were unlikely to support the demand for sanctions. That is why U.S. Secretary of State Condoleezza Rice said that “U.S. administration can wait a little longer” just a few hours before the board meeting went under way.

The so-called Russian plan circulating through the IAEA is thought to have been the main reason why the IEAE gave another chance to Iran. According to the plan, all uranium enrichment activities should be transferred to Russia so that Iran could never complete the building of a full nuclear fuel cycle on its own territory. If accepted, the plan will ensure that no weapons-grade uranium is produced by Iran. In conjunction with the IAEA inspections, the plan will be a guarantee of peaceful purposes of Iran's nuclear activities.

Given Russia's industrial capabilities, the project will be easy to carry out. All parties concerned (with the exception of Iran) have pledged their support to the plan. Russian Foreign Minister Sergei Lavrov voiced his approval to the plan.

Is the Russian plan really good? It is if we judge by the definition of the main contractor. Moscow's caution in claiming copyright in the project is quite understood since the concept has been circulating among the experts both in Russian and in the West. Despite thefact that Russia is reluctant to use the term, our Western partners have been persistent in telling everybody that the program was of Russian origin.

In any case, Russia is undoubtedly very interested in resolving the issue. It will be possible to kill two birds with only one throw if the project is a success. First, close trade and economic cooperation between Russia and Iran will be maintained. Second, confrontation with the West, primarily with the United States, will be averted.

The lack of additional incentives for Iran is strikingly obvious, especially if we compare the negotiations held between Iran and the “European troika” and the six-party negotiations on North Korea's nuclear program in Beijing. Unlike the Europeans who vaguely promised to the Iranians “access to technologies,” the Western parties on the talks in Beijing promised a lot of things to the North Koreans. The list of benefits has not been finalized, though. At the moment it includes normalizations of the relationship with the United States, considerable economic aid including food supplies, assistance in the field of power engineering including construction of a nuclear power plant with a light-water nuclear reactor.

The approaches differ greatly in spite of the same black list Washington has put both countries on; both of them are part of the so-called axis of evil as defined by the U.S. government, the United States has no diplomatic relations with either country.

It is the United States that might make an offer to Iran, an offer Iran could not refuse. In other words, the Russian plan plus a U.S. package of incentives should be used to destroy the smallest possibility for Iran to get a hold on nuclear weapons.

In light of the above, it should be noted that Russian diplomacy has done a lot in order to exert influence on Tehran with regard to the solution of issues relating to the nuclear program. Russian foreign ministry also worked hard to keep its Western partners from undoing the “Iranian knot” in a hasty and confrontational manner that could only result in a severe international crisis. Diplomats gained time thanks to Russia's efforts. The negations are still going on.

U.S. “package of incentives” for Iran might include security guarantees, normalization of bilateral relations in all areas including trade and economic cooperation. U.S. President Bush could have said something important on the subject as he “okayed” the “Russian plan” during the meeting with his Russian counterpart in Thailand earlier this month. So far the Americans have been busy putting pressure on Iran in order to make it shut down the nuclear program. The Americans say that the Iranians do not have to build any nuclear power plant with all those amount of recoverable oil reserves, and therefore all the Iranians want is to build an A-bomb.

The Iranian government says the United States in the past got Shah to launch a nuclear power program. The present-day authorities simply keep on developing the program, according to the Iranians.