Israel tries to set the world against Iran

Global media continues to discuss the situation around the Iranian nuclear program. Media's attention was attracted by the publication of classified graphs showing growth dynamics of energy capacities and production in kilotones. Western diplomatic sources said on condition of anonymity that Israel deliberately admitted leakage of this information for political purposes.

The graph was regarded as evidence that Iran was increasing production capacity and making significant progress in preparing for the production of nuclear weapons. After the publication of the controversial document, head of Atomic Energy Organization of Iran issued a rebuttal, saying that the graph did not prove anything. Israeli Prime Minister Benjamin Netanyahu, by contrast, stressed that the graph was the evidence that Iran was inevitably approaching the red line that Israel established in September at a meeting of the United Nations. According to the Israeli information portal Cursor, Benjamin Netanyahu earlier stressed once again that in 2013 the world would have to face the problem of nuclear Iran if decisive actions are not taken today. 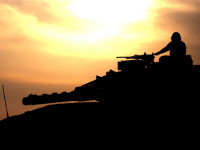 According to observers, Israel was interested in the "leak" from the very beginning. Tel Aviv is trying to attract the world's attention to the potential threat from Teheran that came close to developing nuclear weapons. This fall the U.S. and Israeli made another attempt to strengthen economic and military pressure on Iran. The U.S. army has greatly increased naval presence in the Persian Gulf. Today, however, the situation around the nuclear program of the ayatollahs is not the same as it was five or ten years ago. Over the years, Iran advanced quite far in developing its own uranium enrichment technology. At the underground Fordo plant, over a thousand centrifuges have been installed, most of them were operating at full capacity in September of this year. In August of 2010 the Bushehr nuclear plant was built and put into operation. A year later, the first unit of the nuclear power plant had the power of 400 megawatts.

All these years, the mutual exchange of threats between Tel Aviv and Tehran has been ongoing. It makes no sense to list all the bellicose statements of prominent politicians of the two countries. They are numerous and in a sense not much different from one another. Over time, many analysts were inclined to think of failure of a possible Israeli strike on Iranian nuclear facilities. If this happens, a response from Iran can be devastating. In May of 2011, the former head of "Mossad" Meir Dagan warned the Israeli government against the recurrence of the Iraqi scenario of 1981. Dagan did not believe in a possibility of destroying the Iranian nuclear program with a single strike. Iran has well camouflaged infrastructure located deep underground or existing under the guise of civilian buildings. In addition, a military strike could cause a regional war. Israel would be subjected to rocket attacks not only from Iran, but also from the Hezbollah in Lebanon. In short, a pre-emptive strike is not the way out as it would have significant complications.

At the same time, the West has exhausted nearly the entire arsenal of economic sanctions that were strengthened in 2012. The pressure on Damascus, Tehran's closest ally, continues. Since October 15, another, the 19th batch of EU sanctions against Syria has been adopted, accompanied by recommendations for further strengthening of sanctions against Iran.

The international community continues its attempt at a diplomatic resolution of the Iranian crisis. A few days ago the sixth round of talks between Tehran and the IAEA's nuclear program was completed. Official sources have not reported on the results. It is still unclear whether inspectors would be able to access the International Agency on military installations, where nuclear weapons allegedly are being secretly developed.
Recently, Deputy Director General of IAEA Herman Nackaerts told reporters that he hoped to obtain a permission of the Iranian authorities to visit the nuclear facility in Parchin, as insisted upon by agency head Yukiya Amano. In May of 2012, Fereydoon Abbasi, who heads the nuclear agency of the Islamic republic, said he would not allow UN inspectors to this military facility, Newsru.co.il reminded.

Meanwhile, the United States confirmed that it will consider March of 2013 as a deadline for Tehran. By this time, Iran must show full cooperation with the IAEA. If this does not happen, Washington is threatening to give the Iranian nuclear dossier to the UN Security Council the, which can lead to aggravation of the conflict in the Middle East in the near future.