Will there ever be order in international arms trade?

The United Nations Conference on the Arms Trade Treaty opened with a scandal. The delegations of Palestine and the Vatican reconciled with the observer status, and representatives from 193 countries began to work. Before July 27th, they need to develop the first-ever document that will design a legal framework for conventional arms trade, the turnover of which is evaluated at more than 70 billion dollars a year. 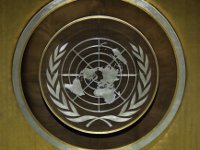 The conference at the UN headquarters is the first attempt of humanity to control the movement of the products that kill about 700,000 people a year with 500,000 of them being civilians. "The arms trade fuels ill-regulated and civil conflicts, destabilizes regions and expands the capabilities of terrorists and criminal networks. We do not have a multilateral treaty on global trade in conventional arms. It's a shame," UN Secretary General Ban Ki-moon said in his opening speech.

It took the UN seven years to prepare for the conference. Tellingly, the event was initiated by non-governmental organizations rather than the governments of different countries. The latter were actually against it - the U.S. government under George W. Bush, for example. There are permanent skeptics to it as well - the Russian government, for instance. However, everyone has been supportive of the initiative recently saying that they want to unify the rules.

According to the Stockholm International Peace Research Institute (SIPRI), 30 percent of the world market of arms exports is held by the U.S. Russia comes second with 24 percent. The list of the leading arms exporters continues with Germany (9 percent) and France (8 percent).

According to the Institute, the share of Asian countries altogether accounts for 44 percent of the world imports of arms (India, South Korea, China, Vietnam). European countries in comparison with the Asian continent can boast of only 17 percent, whereas North and South America - 11 percent.

The project of the International Arms Trade Treaty (IATT), which the  UN report called simply "Chairman's Draft Paper", indicates the following types of military hardware: tanks, military vehicles, artillery systems, military aircraft (manned or unmanned), military helicopters (manned or unmanned), warships (surface ships and submarines, armed or equipped for military use), missiles (guided or unguided) and missile systems, small arms, light weapons, ammunition, parts or components to these weapons, as well as technology and equipment, specially designed and used for the development, production or maintenance of the mentioned arms.

The document provides for mandatory annual reports on the transfers of arms. It is assumed that the data of the reports is to be published. The information subject to publication includes the number, model or type of arms, allowed and rejected arms deliveries, the delivered arms and detailed information about the countries of transit, the receiving state (or the country of export) and, finally, the end-users. More importantly, the reports are supposed to say where and for what reasons deliveries can be banned. It goes about the ban on arms sales for the countries "intending to use weapons against civilians, to commit acts of genocide, and other actions in violation of the UN Charter and human rights."

This is the reason for Russia's (and not only Russia's) skepticism.  A half of Russia's arms exports (13.5 billion dollars in 2012) goes to the countries, which the UN has already recognized as unreliable or criminal due to violations of human rights. It goes about Syria, Venezuela and China. Chances for the matter to be resolved favorably for Russia are slim. It is interesting to look at other active skeptics, other than those mentioned: Algeria, Egypt, India, Iran, Pakistan and Cuba.

From this perspective, the agreement is very favorable for the U.S. The United States supplies weapons solely for the "noble goal" - to "protect civilians from dictatorial regimes." The powerful military-industrial complex of the United States is always in search of permanent sales markets. The state creates them through its allies, providing favorable resolutions at the UN. Ninety percent of large companies that produce conventional weapons are American and European companies. They are Lockheed Martin, BAE Systems, Boeing, Northrop Grumman and General Dynamics.

In 2012, the U.S. intends to sell arms in the sum of $60 billion. The States is a "moderate supporter" of the IATT. Who supports the strictest version of the agreement? They are Kenya, South Sudan, Tanzania, Ghana, Nigeria, Zambia, Costa Rica, Mexico, Uruguay, Australia, New Zealand, Bangladesh, Austria, Denmark, the Netherlands and Norway.

Obviously, the IATT, if it is signed, will cover only the legal sector. What about the illegal trade through third countries and arms trafficking? The project says nothing about it. There are serious discrepancies on the list of arms and technologies too. Russia intends to insist the contract should stipulate the rules for selling only light weapons and small arms.

The delegations of the United States, China, Syria and Egypt are going to delete any mention of the ban on the ammunition trade from the text of the document. The leaders of the world arms exports are likely to exclude the paragraph about the control mechanism, providing for international inspections that will be entitled to demand documents for doubtful arms supplies.

The UN describes the initiative as "the most important one in the history of the United Nations in the field of conventional arms control standards." The United Nations launched a special website to cover international efforts in concluding the treaty. Skeptics say that the IATT will repeat the fate of the Convention on Cluster Munitions (CCM) - the international treaty prohibiting the use, transfer and stockpiling of cluster bombs. Dozens of states that signed and ratified the document had never produced any cluster bombs. The countries that produce and possess such bombs did not sign the document.

As long as the world is divided into the East and the West, "democratic" and "dictatorial" regimes, "terrorist Islamists" and "civilized Christians," the interests of national security and commercial secrets will always be more important than world peace.