Why USA can and Egypt can't?

The ISIS beheading of 21 Egyptian Copts on a beach in Libya has generated rage and disdain among the international community, as well as in the Arab world and a strong reaction from Cairo. The Egyptian and Emirates Air Force attacks on several sites of the group's stronghold in Derna, killed over 50 jihadists and destroyed a good part of their infrastructure. In addition, on Wednsday, Egyptian special forces raided Derna and captured a vast number of ISIS members. 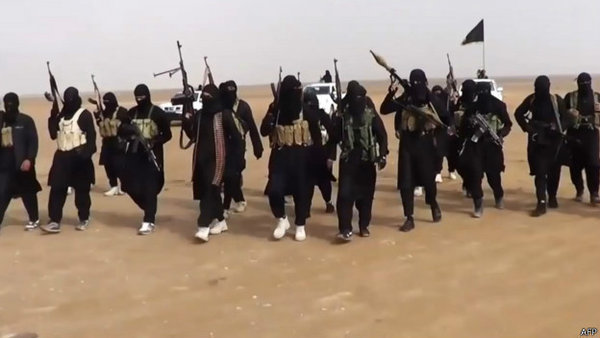 The Obama Administration immediately condemned the Egyptian and Emirate attacks in retaliation for the slaughter of the Christian Copts. According to Pentagon spokesman Navy Rear Admiral John Kirby, the U.S. believes the crisis in Libya must be solved politically and without outside interference:

"We discourage other nations from taking a part in Libya's issues through violence," Kirby said. "We want the issues solved in Libya to be done peacefully and through good governance and politics and not violence." [1]

At this point it is more than legitimate to raise a question: why would the United States be allowed to strike wherever they want, such as Iraq for instance, while other countries like Egypt, who are facing eminent threats, shouldn't be authorized to attack?

According to Kirby the circumstances that brought Egypt and the United Arab Emirates to carry out airstrikes in Libya were different from U.S. airstrikes against ISIS as the U.S. was acting in Iraq, in a "very targeted" manner, at the request of Baghdad's government and not with some unilateral decision.

As more details emerge, it seems that the U.S. went beyond the condemnation of the attacks. In fact, according to former US Marines officer, Oliver North, the Obama administration refused to assist Egypt with information on ISIS targets in Libya; same thing with Jordan in relation to the raids carried out by Amman in retaliation for the brutal execution of its Air Force pilot Moaz al-Kasabeh, burnt alive by ISIS.

Kirby's explanation makes no sense since the Obama administration has been constantly targeting objectives in various countries such as Yemen, Somalia, Afghanistan and Pakistan, but going beyond Kirby's poor justification, it is more than obvious that Obama and his entourage have two major reasons to object Egypt's intervention against ISIS:

1. In the first place Obama cannot digest the recent deal between Russia and Egypt. In fact it is essential to recall that Abdelfattah al-Sisi has recently received in Cairo Russian President Vladimir Putin and the two countries signed an agreement for military and economic cooperation, that includes the construction of a nuclear energy plant in the northern city of El-Dabaa; an extremely important project for a country like Egypt, that often has to deal with energetic blackouts.

Al-Sisi is well aware that Russia is a serious and reliable ally that has always been in first line against terrorism and facts speak out: Russia outlawed the Muslim Brotherhood and several other terror organizations in far 2003 with a law of the Supreme Court, while in the West several of them (including the MB) are still free to operate. In the northern Caucasus, Russia has responded firmly and strongly against the Caucasus Emirate, crushing the organization and eliminating its historical leader Dokku Umarov. Operations against what's left of the jihadi jamaats in the northern Caucasus are constantly underway with positive results.

In addition it is important to keep in mind that two Isis high members, Umar al-Shishani (who had threatened to bring jihad in Russia), and Abu Saad al-Daghestani (who was filmed in a video handing a gun to a young boy who executed two Russian citizens in Syria), were both eliminated.

Egypt needs a strong and reliable economic and military partner as, since the overthrow of the Muslim Brotherood-led government, the country has been facing a wave of terror attacks perpetrated by Islamist terrorists.

2. The reason why Egypt slipped out of the United States' hands also must be attributed to Obama and his stubborn alliance with the Muslim Brotherhood. In fact it is important to recall that during the July 2013 protests in Egypt, when the people, led by the Tamarrod movement, took the streets to ask for the resignations of the Muslim Brotherhood government led by Mohamed Morsy, the Obama administration refused to recognize the popular demands and supported the Islamist government until the last minute. When the Egyptian army intervened, the Obama administration immediately condemned the so called "coup" but forgot to keep in mind that millions of people took the streets to ask for new democratic elections. Quite strange for a nation that has always insisted on "exporting" democracy.

The Egyptian people in the streets were so upset by the behavior of former US ambassador to Cairo, Anne Patterson, who sided with the Morsy's government up to the point, that she had to quickly leave Egypt.

The same Obama administration refused to take strong action when a group of Jihadists attacked the US embassy in Benghazi, Libya and slaughtered former ambassador Chris Stevens. Incredibly, while it was obvious that the attack had been coordinated and perpetrated by a large number of militants with trucks and RPG's, the Obama administration tried to define it as a spontaneous - not a premeditated - response to what had transpired in Cairo; a violent protest that had taken place in reaction to a video that had offended Muslim sensibility (Innocence of Muslims). [2]

Hence it is evident that Obama preferred to remain loyal to his Muslim Brotherhood fellows, even if it meant losing a key regional ally such as Egypt and for those who still have doubts about it, there are more interesting facts.

In the last week of January 2015, the US State Department hosted a delegation of Egyptian Muslim Brotherhood-aligned leaders for a meeting about their ongoing efforts to oppose the current government of President Abdel Fattah al-Sisi. The delegation included Waleed Sharaby, Gamal Heshmat, Abdel Mawgoud al-Dardery e Maha Azzam, all well-known MB activists. Sharaby even took a picture in front of the US State Department logo while flashing the four-finger symbol in front of the camera. The same gesture was also performed in a recent event by former US ambassador to Egypt, Anne Patterson.

These facts should not be a surprise; in fact another Muslim Brotherhood-aligned member, Mohamed Elbiary, had made it all the way to a high position in the United States Homeland Security Department and had to resign in September 2014 after some embarrassing comments in favor of the Caliphate, of the Muslim Brotherhood and against the protests of Egyptian Copts in Egypt. Elbiary had also taken part in the DHS Countering Violent Extremism Working Group and in the DHS Faith-Based Security and Communications Advisory Committee.

In 2009, Dalia Mogahed appeared in a London-based television broadcast presented by Ibtihal Bsis, deputy media representative for Hizb ut-Tahrir, an organization that has been black listed in several countries including Russia. [3] [4]

At this point it is not hard to understand why Obama does not want to support Egypt and does not want other state-actors to attack jihadists in Libya. The US Administration discourages any type of military intervention, which is the same message that has been given to Italy by the Arabic website of the Muslim Brotherhood. [5]