Libya: Is Gaddafi responsible for the current mess?

The prosperous Great Socialist People's Libyan Arab Jamahiriya is gone. The once vibrant country has become a failed state, ruled by militias and "jihadists" who terrorize the land and wage war on each other over the ruins of NATO's deceitful promises of democracy. 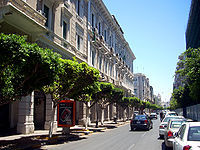 It all started in early 2011, when the West brought along groups consisting of enemies of the Al-Fatah Revolution, together with some naive youth, into the Libyan streets to usher in an era of chaos and destruction. Currently disillusionment reigns, and we all somewhat stand aside and look, not knowing what to do against the violent outcome of the NATO intervention. Meanwhile the so-called revolutionaries are merely busy bombing, shooting and killing each other for their so-called revolutionary rights which, according to themselves, have been violated by other so-called revolutionaries from other cities and tribes, and vice versa.

As much as it is not clear to anybody what those "revolutionary rights" exactly consist of, other than of an insatiable hunger for power, it is crystal clear that this motley crew of thugs has no constructive ideology, leadership or plan whatsoever to rebuild Libya from the ashes. On the contrary, their main purpose seems to be to wreak as much additional havoc as possible. Can we put the blame of the current state of Libya on NATO and its mercenaries alone, or might Gaddafi also be responsible for the mess that Libya became after his assassination?

Recently I heard a pro-"February 17″ saying: "I wish Libya had no oil." These words were spoken in a conversation on militias that took hold of oil facilities, but it nonetheless made me imagine the country without its economic backbone. The oil industry represents 96% of Libya's revenue and 98% of its foreign currency revenue, which is about $48 billion a year. Libya without oil most certainly would not have become the most prosperous country of Africa as it was under Gaddafi. More likely its economy would have been very similar to the Burkinabe economy under Thomas Sankara, who, following in the footsteps of his role model Gaddafi, also made his country practically self-sufficient in its demand for basic needs. He accomplished this by, inter alia, creating an industrial base for the dominantly agrarian Burkinabe economy, by supporting private businesses and by improving the country's infrastructure. But because of the lack of significant oil reserves as discovered in Libya in 1959, Burkina Faso had to work at least ten times harder than Gaddafi and the Libyan people to become self-sufficient.

Gaddafi made good use of Libya's oil wealth and completely restructured the country. All Libyans enjoyed free electricity, water, education, housing assistance, interest-free state loans, disability and old-age benefits, as well as generous subsidies to study abroad, buy a car, help newly-weds, practically free gasoline, cheap food, and a lot more. Gaddafi also made sure that no Islamic fundamentalist movement would take power, like happened in Algeria where tens of thousands were killed as a result. Libya became one of the most stable countries in the Arab world, and the most thriving in the African continent. There however has proven to be a downside to having everything you need presented to you on a golden platter.

If we for one moment forget about the evil Western vultures, at the beginning of the year 2011 two groups could be distinguished in Gaddafi's Libya. For one group, paradise was not good enough, hence they became voracious eaters of the apple falsely named Democracy that was dangling on the NATO tree - and their lives subsequently became the hell it is today. The other group pretty much fell asleep in paradise. Those are the "Green Libyans" who flocked to Tripoli in their millions on July 1, 2011, in support of their leader and in condemnation of the NATO bombings. Those also are the millions Gaddafi called on in his final communiqués, when he urged them to march to the cities and the mountains, the streets and the houses, in order to liberate the land from imperialists, crusaders, terrorists and traitors.

The question where those millions currently are geographically is easier to answer than the question where they exactly are ideologically. As many as two million Libyans, meaning more than one third of the population (immigrants not included), had to flee their country after NATO bombed its "rebels" into entering Tripoli in August 2011. Nowadays the majority of them live in the neighbouring countries of Tunisia and Egypt, as well as in some European countries such as Germany. Some of them still express their support for the leader of the Al-Fatah Revolution by decorating their new homes with his pictures. Others, sadly enough the vast majority of those who waved the green banners on July 1, 2011, largely deceived Gaddafi and betrayed his ideology of an independent, sovereign Libya, governed by the masses. They instead made it easy on themselves and they nowadays unconcernedly enjoy watching the World Cup and the latest soap series in their new country, while their homeland is going further and further into demise.

During recent conversations with displaced "pro-Gaddafi" Libyans, I sensed a lingering conviction that the Great Liberation of Libya is on its way, and that all will be well in the end. Meanwhile virtually none of them is taking any form of action whatsoever, neither in a symbolic nor in a practical manner. And this I believe is the core of the problem behind the ongoing violence and total lack of structure in Libya. As great of a visionary leader Gaddafi was, when people get used to someone providing solutions for them and making their lives an almost free five-star hotel, the inevitable result of that is most of them become spiritually lazy, inactive, unaware - and this is exactly what most "Green Libyans" became. They precisely knew how to praise their leader and how to celebrate the benefits of the Jamahiriya, but they lacked practical knowledge as for how to get organized effectively and how to properly stand up for themselves and their country, as there never had been a reason to act like that. A telling example of this are the reactions of many Libyans regarding the NATO aggression in 2011, all saying something like: "What have we done to deserve this? We want NATO to go away and to leave us alone, so that we can continue to live our lives." Unfortunately this is not exactly the most efficient way to deal with the most powerful military alliance in the history of the world when it comes knocking at your door.

It seems to me that many Libyans, especially the youngsters, nowadays more or less suffer from some form of Spoiled Child Syndrome. They obviously keep expecting "someone" to take care of bringing back freedom and peace, and there is very little motivation for developing the talents and skills that could make them able to take Libya's destiny into their own hands. This lackluster attitude probably can be blamed on Gaddafi's overprotection. Because Gaddafi took responsibility for the well-being of the entire nation in a revolutionary way that is incomprehensible to the Western world, the Libyan people were able to behave like children in a playground. But now the shepherd is gone, and the sheep are scattered and frightened to resist, and thus become food for the wild (NATO) animals.

More than for any other peoples, it is time for the Libyans to wake up to their true potential. Gaddafi is no longer around, but his ideology of true democracy, meaning a government by the masses, is still alive and should, given the current situation, be more actual than ever. Therefore my call to all freedom loving Libyans - and in a broader perspective to everyone - is, stop sitting around hoping for better times. Don't rely on "representatives", "saviours" or self-proclaimed leaders for improvement and change. Put your petty differences aside. Unite and get organized, as it is your human responsibility to engage in the historic struggle against imperialism, racism, Zionism, and all other forms of evil that NATO brought to the sovereign Libyan Jamahiriya. Define the destiny of your country and start taking one step at a time to reach your goals by using the skills that you have. And above all, like Gaddafi said, don't be afraid of power, but possess it by all the means that the Creator gave you, in order to defeat the murderous gangs that pillage, plunder and rape your homeland.

If those millions of Libyans could make that happen, I believe there will be a true revolution sooner than later, and they will be victorious.