Russia and Hungary: Something to talk about

One should not sing praises to Hungary's Prime Minister Viktor Orban, who, according to Western media, is making advances to Putin, debunking the myth of Russia's isolation in Europe. The Hungarians have never had a strong affection to Russians. However, Russia's brotherly nation of Bulgaria vote for anti-Russian leaders, whereas the Hungarians vote for the pro-Russian one. In fact, there is no paradox. There is one smart politician, a patriot. 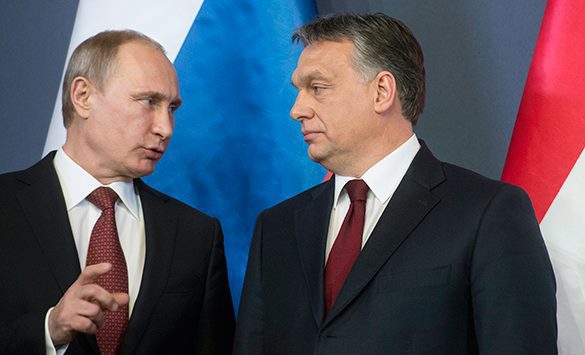 Viktor Orban is a smart politician, who works primarily in the interests of his people. This involves cooperation with Russia in energy and gas sector. The Hungarians support FIDESZ Party - it enjoys absolute majority in the parliament - no other national parliament of the European Union can boast of that.

Such a position will give Hungary tremendous advantages in five or ten years, as compared to Bulgaria, for instance. Hungary will have cheap gas, its own nuclear energy and own good relations with strong Russia.

Noteworthy, one week before the meeting with Putin, Orban went to Kiev, where he met with Petro Poroshenko. Orban asked the Ukrainian president not to mobilize Transcarpathian Hungarians. The Hungarian prime minister promotes his own project to recreate joint Hungarian national cultural space. Doesn't it look like Putin's policy of collecting the Russian world? Yet, Hungary has recently turned to Brussels with a request to deploy a NATO command post in Hungary due to the growing threat from Russia.

Viktor Orban was the most anti-Russian policy-maker in Central Europe during his first mandate of the Prime Minister between 1988 and 2009. He spoke about the "Russian Empire" and demanded the withdrawal of Russian troops from Hungary in 1989. However, in 2009, Orban started following east-oriented policy. Despite pressure from the EU, he gave an opportunity to Russia's Rosatom to modernize "Paks" nuclear power plant.

In addition, it became clear that Orban shared Russia's approach to traditional values. After US Senator John McCain called Orban an accomplice of Moscow, the Hungarian Prime Minister replied: "It doesn't matter to me what you think. Russia is important for us as a supplier of energy resources, and Germany - as a country that gives us jobs."

Russian President Putin, exhausted with the Ukrainian conflict, paid a visit to Hungary to show the Hungarians that Russia is a reliable partner. The Russian Federation gave Hungary a soft loan worth 12 billion euros for the construction of two nuclear power units of NPP "Paks." Gazprom agreed to increase the volume of natural gas pumped into underground storage facilities in Hungary. According to Orban, Gazprom considers building the "Turkish Stream" to Greece, Macedonia, Hungary and Serbia.

This position of a prime minister - to work for his people - has been increasingly popular in Europe. Let's take Greece, for example, where patriotic party SYRIZA won, or France, Spain and Finland, where nationalist parties have been gaining popularity. In the West, they are referred to as pro-Russian parties, but this is a propaganda slogan that has nothing to do with reality.

The West is looking forward for the moment when ruthless Russian riots start. Yet, Putin's ratings grow, raising many eyebrows in the West. The Donbass will win the war, because the militia fight to protect their families, while the Ukrainians do not understand what they die for.

"One needs to communicate with Russia, - Gabor Stier, the head of the foreign edition of the Magyar Nemzet newspaper told Pravda.Ru. - There is a war next to Hungary's borders, and Russia takes part in this conflict. Therefore, we need more than ever to talk to the head of Russia. One needs to understand how Russia thinks, we need to understand what she wants."

"This is a stupid approach - to isolate Russia, isolate its president. It is in the interest of Hungary not just to talk to Russia, but to strengthen economic, pragmatic relations. We need to look at a map and realize that Russia will not go anywhere, Russia will be near us, and we will be dependent on Russian energy, hopefully, at a smaller extent, but still."