Brussels may become another Sarajevo 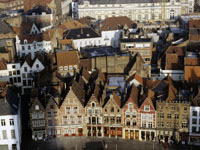 400 plus days without a government is a world record of anarchy. It was set not somewhere in Africa or the bustling troubled Iraq. Recently, the setter of the dubious record became Belgium, which, due to the inability to share power between the Flemish and Walloon communities, is at risk of disappearing from the map of Europe.

The current unprecedented crisis in fact revealed that the Kingdom of Belgium is a rather artificial state formation, albeit existing for a fairly long time. It appeared on the map in 1830, largely at the behest of England that needed a buffer between France and the fledgling Prussia (later - Germany). In principle, this buffer was fine by others. No one made special attempts to attach itself to Belgium.

The artificial nature of the state lies in the fact that it has two communities living side by side, the Flemish speaking a language close to Dutch, and French-speaking Walloons. The former comprise a little over half of the population, the latter - a little less. A small German-speaking community lives to the east of Belgium. Immigrants account for more than ten percent of the population.

Recently national scandals have been occurring nearly in any area of the social life of Belgium. The Flemings are unhappy that the Walloons are trying to patent the Ardennes ham. Or, for example, that "Miss Belgium" of 2009 speaks French but not Flemish. Over 10 years ago, many Flemings protested against the appointment of a Wallon as the head coach of the soccer team. The list of these examples is rather extensive.

Before the Second World War, Walloons played the first violin in Belgium. Rich deposits of coal and steel industry made Wallonia the main engine of the local economy. The French language had a higher status than the Flemish. It was explained not only by the fact that it was stronger and a lot more people spoke it. This largely contributed to the Francophone arrogance as they considered learning the language of their neighbors to be below their dignity. Flemings refused to learn French.

After World War II the situation has changed. The mines have declined, and new high-tech industries have developed mainly in Flanders. As a consequence, this region became the donor that largely supported Wallonia. Gradually, the political influence of the Flemish increased. Since 1974 the country's prime ministers were solely Flemish representatives. Their language by the beginning of the 1980s was formally equal to French. Although many Walloons still find loopholes to avoid learning Flemish.

Over the years, the gap in the development between Wallonia and Flanders only increased. The language issue was accompanied by the immigrant factor. Many immigrants from other countries mastered French and had no intention to start learning Flemish. Why would they? The Flemish regions still speak the language of Rabelais, Victor Hugo, and Maupassant. Naturally, the Flemings were dissatisfied. Separatist sentiments were growing among them, and the Walloons in the end had to consider them.

Until 1993, Belgium was a unitary state, but since then it became a federation of Flanders, Wallonia and Brussels as a separate administrative unit. Parliamentary elections were held separately in two national areas, and the ruling coalition had to include both the Flemish and Walloon parties. The mechanism was somewhat operational until 2007. However, the problem of inequality of the two languages, as well as transfer of funds from the Flanders to Wallonia has not disappeared. And then it manifested itself.

In the elections in Flanders, nearly a third of seats were taken by the parties that openly raised the question of the division of the country. Christian Democrats led by the current interim Prime Minister Yves Leterme have won the election. He did not put the question squarely, however, and said that the Flemings and Walloons were "united only by the king, beer and football." In the summer of 2007 the first government crisis emerged when King Albert II asked Leterme to form the government, but Walloon politicians did not want to join in a coalition with him. All the while, Belgium was headed by former Prime Minister Guy Verhofstadt with the prefix "Acting."

By March of 2008, the government was created but did not last long. Leterme was replaced by a more moderate fellow party member, the future EU president Herman Van Rompuy. However, the latter in the fall of 2009 was promoted, formally becoming a politician of a pan-European scale. Van Leterme resumed his post. Immediately upon his return he got into a fight with Walloons over the linguistic division of the two districts of Brussels and an increase of the economic independence of Flanders.

Tired of the endless squabbles in April of 2010, the king thought it would be best to dissolve the parliament and call new elections. He asked Leterme to continue with his duties. As a result of the elections in June of last year nationalist party of the New Flemish Alliance (NFA) won among the Flemish. In total the parties one way or another sharing the ideology of separatism scored 45 percent of the Flemish votes.

Within the letter of the Constitution, Albert the Second asked the leader of the Popular Front Bart De Wever to form the cabinet. Francophones did not want to deal with him. By the fall the monarch changed his mind and for the first time in 36 years gave a mandate to form the government to a Walloon - a French-speaking representative of the winning side of the country's Socialist Party, Elio di Rupo. However, he was not accepted by the Flemings. Di Rupo is not only a French-speaking politician, but also a homosexual and a child of immigrants from Italy.

As a result, the king ordered a moderate Flemish politician Vande Lanotte Johanna to form the coalition. The latter, however, resigned, and the king had to return to the candidacy of De Wever. The latter demanded more autonomy for Flanders, Wallonia was against it. The crisis deepened, and Yves Leterme continued to serve as prime minister. On February 17 of this year, Belgium broke the world record of anarchy that belonged to the long-suffering Iraq: 250 days without a full government. Since then, it already celebrated 300 days, and 400. A fantastic figure of 500 days is on its way.

It is expected that on 19 August there will be a new attempt to end the anarchy. But even if it is successful, the issue of the decay of Belgium's agenda will not be over. It is not only the Flemish but also Walloons that think about this scenario. The leader of the "Walloon Rally" Claude is thinking about joining TEK Wallonia to France. "We have the same language, we watch the French television, not Belgian. But above all, our economy is controlled by French companies. We will survive only if we attach out train to the French locomotive," - he said.

Polls show that 60 percent of France's population and half of the Walloons are in favor of such an option. However, among the leading French politicians only the leader of the ultra-right National Front, Marine Le Pen, supports the idea of ​​joining of the Walloon. In turn, two-thirds of the Netherlands are not against the unification of their country with Flanders. Many politicians and voters of the Flemish nationalist parties agree with these plans. The existence of Belgium is threatened by various factors.

Surprisingly, but the European Union, whose headquarters are located in Brussels, has not yet responded to the unprecedented political crisis in Belgium. "The EU is afraid that the separation in Belgium would ignite a spark throughout Europe: Catalonia would separate from Spain, Scotland from Britain, and so on. At home we are already seeing as action of the separatists in mixed cities turn into violence, even with firearms. Soon Brussels can turn into Sarajevo," says the Belgian newspaper Le Vif.

If the EU is so afraid of everything, why does it not interfere with the events in Belgium? It is unlikely, of course, that something similar to the war in former Yugoslavia would happen in rich Belgium. However, the resistance already exists in less extreme forms. Brussels is considered their own by both Walloons and Flemings. Its separation would be the most difficult stage of negotiations between the two communities. In this case the EU will unlikely be able to bury its head in the sand. The state border can be erected right in front of the windows of the headquarters of the European Commission.