On February 17, Belgium has set a unique world record. For 250 days, this quiet prosperous European country has not been able to form a full-fledged government. The reason for that is the inability of politicians representing the country's two largest communities - the Flemish and francophone Walloons - to come to an agreement. 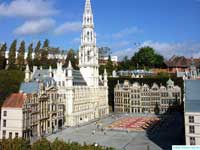 Until recently, the dubious record belonged to Iraq. The country seized by religious and ethnic strife had lived without a full-fledged government for 249 days. The "achievement" was established last year and seemed to have lasted forever. However, the record was broken by the politicians from the prosperous country that hosts the headquarters of the European Union and NATO.

On the occasion of dubious achievement, a group of Flemish and Walloon students in Brussels, Antwerp, Liege, Bruges and Ghent will hold a rally against anarchy and in defense of the integrity of the country. They named it "Potato Revolution. "We named our rally by analogy with jasmine revolution in Tunisia, as French fries is a symbol of Belgium," said one of its organizers.

The crisis could really frustrate many. For the last few years, representatives of the Flemish parties insisted on the partitioning of bilingual districts of Brussels and the increase of the economic independence of the regions. Wallonia was against it. In addition, the Flemish thought that French was actually "the first of the two equal official languages." Tired of the endless squabbles and shake ups in the government which lasted three years, in the spring of 2010 King Albert II has called early parliamentary elections.

The results of the elections were shocking. "New Flemish Alliance" whose leader Bart de Wever has repeatedly stated that the Flemish and Walloons could live in two different countries has won in the largest developed region of the country.

The problem is that the Belgium legislation requires the government to include both representatives of Flemish and Walloon parties.  Yet, it is nearly impossible for Wever to find partners among francophone. He insisted if not on the independence of the Flemish then at least on their autonomy and reduction of allocations of funds to the Belgium budget. De Wever wanted to leave no less than 40% of taxes in Flanders.

For policy-makers from poorer Wallonia who insisted on maximum centralization, this demand was not acceptable. Negotiations have stalled, and the King granted the right to form a government to the leader of the Socialists, Elio de Rupo, who won in Wallonia. However, the majority of the population is the Flemings, and de Rupo is not a true Francophone, but rather a descendant of Italian immigrants, therefore, he has failed to make any agreements.

The King again handed the power over to de Wever, but then new stumbling blocks have emerged. His party insisted on the separation of several districts of Brussels in Flanders and Wallonia. He also wanted to leave up to half of the income tax in Flanders, and the Walloons agreed only on ten percent. Negotiations have failed, de Wever had to resign. Albert II was forced to seek a new candidate.

Meanwhile, representatives of both communities made pessimistic statements about the future of the country. "We can no longer ignore that this (independence - Ed.) is wanted by the majority of the Flemish population. Therefore, it is necessary to prepare for the end of Belgium," commented on these results Deputy Prime Minister Laurette Onkelinx representing the Walloon Socialists. Representative of the Flemish Christian Democrats and the brother of the president of European Council Herman van Rompuy Eric Van Rompuy said the following: "Belgium is in a coma. The patient is in a state of clinical death."

The former Deputy Prime Minister Johan Vande Lanotte, who in October of 2010 was instructed by the King to form the cabinet, has been trying to save the situation for several months. He proposed a tax compromise, but it was rejected. De Wever firmly rejected any coalition with the Walloons, and simultaneously issued a death sentence to Belgium saying that it was no longer functioning and was a "failed country." Desperate to convince De Wever, in early January of 2011, Vande Lanotte asked for a resignation, but Albert II only accepted it when asked for the second time. 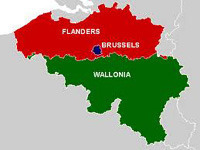 Meanwhile, Belgium was rapidly approaching the Iraqi "record." Interim Government was formally led by the leader of the Flemish Christian Democrats Yves Leterme, but is it easy to lead in limbo? The country's economy was rolling down the slope, and some experts predicted that under the conditions of a permanent political crisis the country could expect an economic collapse similar to the one that happened in Greece and Ireland.

Some people's patience has snapped. On January 23 the streets of Brussels were flooded by 30 thousand people. They were protesting against the anarchy and chanted: "Shame" and "What do the people want? They want the government." People also protested against a possible collapse of Belgium: "Separation? Not in our name!" Indeed, these people are right. The idea of dividing the country is supported by only one-third of the population in Flanders. In Wallonia, the percentage of those is insignificant.

However, politicians have not been able to agree. Then extravagant appeals were employed. Actor Benoit Peelvoorde called the Belgium people to protest against anarchy by growing beards. Senator Marleen Temmerman made a desperate move.  She urge the spouses of the negotiating parties to abstain from sex until an agreement is reached. She called them not have sex until the new government lines up in front of a photographer on the steps of the palace.

The strike never took place, and Temmerman's colleague in the Senate Catherine Fonck has firmly rejected such a proposal. "I do not want to participate in a sex strike. Politicians are not there to strike. On the contrary, politicians are there to arouse the country," she said. As a result, the politicians were not affected by anything, Belgium has set a sad record, but the issue of preserving the unity of the country inhabited by two large and multilingual communities is now even more acute.

Will the politicians be affected by the current Belgian Potato Revolution? Will a group of Walloon and Flemish students stop the collapse of the country? Experts Alexander Rahr and Vadim Prozorov reflect on these questions in an interview with Pravda.ru.

Alexander Rahr, an expert of the German Council on Foreign Relations:

"The crisis in Belgium is really heavy, the political system of the country is in paralysis. However, the economy still exists, the country has not collapsed. In addition, Belgium is used to living in somewhat of a limbo. The dispute between the Flemings and Walloons has been going on for many decades, but the country has not collapsed. One gets the impression that 30 years ago separatism among the Flemish was stronger than today.

From the Belgian side the crisis seems really serious. However, Belgium is an EU member, it gave the EU a part of its sovereignty, and this moment is stabilizing factor. It does not seem that the country will certainly fall apart. But even if this happens, there will be no catastrophe. Flanders will join the European Union, whose headquarters will continue to reside in Brussels.

"Despite the difficulty of the situation, we are hardly talking about the split of Belgium today. Of course, there are different parties, different population groups, mutual resentment of Flemings and Walloons. Yet this is not an environment for the hardest fights, such as those that occurred, say, in the Balkans. It seems that local politicians are not serious yet about the collapse of the country.

However, in the slightly longer term we cannot rule out the split of Belgium. If the EU suffers more than it does now and the economic crisis affects the basis of the EU, Belgium is one of the first candidates for the split. In such circumstances, it will be quickly discovered that the country where the headquarters of the EU and NATO are located is not viable. National contradictions are national contradictions."