Fidel Castro in thrall of celebration and Guinness Book 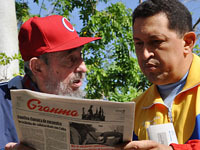 Last weekend, the legendary Cuban revolutionary leader Fidel Castro celebrated his 85th anniversary. The celebration was a great success. Some of the events during the celebration were quite surprising. Yet, they once again proved that the Comandante remains a cult figure until this day.

As always, the birthday boy received a great deal of congratulations from both the local political elite and leaders of foreign countries. Telegrams with wishes of health, political and creative success poured in from around the world. Fidel's close ally in combatting the U.S. influence in Latin America - Venezuela's President Hugo Chavez - came to celebrate in person.

In this case, it is not clear who visited whom. Chavez is in Cuba for the second round of chemotherapy, and 85-year-old Castro came to visit the patient. "Fidel came to the hospital where I was" detained" and said to me - I came to you with a gift, the jeep we'd travelled nearly all over Cuba in," Hugo said about the meeting with Commander and his gift.

"I got into the jeep and drove down the street. We planted two pine trees that I had brought for him from Venezuela. Fidel was in a good mood and optimistic," said Chavez. The rested Venezuelan leader spent the entire glorious day of August 13 with Castro, as if gathering his physical and political energy.

However, it was not the meeting of Fidel and Hugo, and not even the address of the current leader of Cuba and Fidel's brother Raul Castro that became the central event of the celebrations. On the night of August 12 at the Karl Marx Theater in Havana, singers from a dozen of countries performed "Serenade of fidelity" for over the three-plus hours. Local television broadcast the event live. However, neither Fidel nor Raul, nor the distinguished guest from Venezuela attended the event.

Surprisingly, but even gay community that Fidel had been fighting hard for many decades gave a present to the Commander. On August 13 the first in the history of Cuba homosexual marriage was registered on the island. Last year, Fidel apologized for the persecutions. Now the representatives of sexual minorities openly declared that the event was dedicated to the leader of the revolution. There were no reports on the reaction of the older Castro or other country's leaders.

"Serenade of fidelity", the arrival of Chavez, numerous gifts and even a gay marriage timed to the anniversary prove once again that Fidel Castro still remains a cult figure and a legend. Indeed, was their another non-monarchic leader who managed to stay in the thick of political events for over 50 years, and rule his country for 49 of them? He was included in the Guinness Book of Records at least in two categories.

The first one is the number of failed assassination attempts. Meticulous researchers have found that there were 637 assassination attempts in Castro's life. Nearly all of them were the handiwork of the CIA dissatisfied with the appearance of a socialist country right next to the United States, or Cuban exiles who could not forgive Fidel weaning property. American gangsters were upset with him because after winning the 1959 revolution in Cuba he closed the famous casinos and brothels, where gangsters loved to fly over the weekend.

Castro survived 11 U.S. presidents, virtually all of whom tried to eliminate the Cuban leader. It is estimated that during the presidency of Dwight Eisenhower, there were 38 assassination attempts, under John Kennedy - 42, Lyndon Johnson - 72, Richard Nixon - 184, Jimmy Carter - 64, Ronald Reagan - 197, George HW Bush - 16, Bill Clinton - 21. It seems that only Gerald Ford did not have time to give a respective order. W. Bush and Barack Obama for some reason were not willing to tempt fate.

Here are a few well-known assassination attempts. In 1961, the CIA sent a Chicago mobster John Rosselli to Cuba. He was given a tiny capsule of poison that he had to leave in Castro's food. However, Fidel suddenly stopped going to the restaurant where Roselli headed. The attempt fell through. The plan of murder by a strong gas in his favorite cigars "Cohiba" has failed as well.

The Comandante has never tried on a wetsuit for spearfishing with impregnation causing a skin disease. The bomb installed under the podium where Castro delivered one of his many speeches has not detonated either. Americans wanted to use the Commander's former mistress Marita Lorenz to kill him. The attempt has failed again, and she eventually settled in New York.

Castro's long speeches have also made it to the Record Book. On September 29 1960 he was speaking at the UN General Assembly for 4 hours 29 minutes. No one was ever close to this record. Fidel's supporters assure that at the third meeting of the Communist Party he spoke for 27 hours. However, Western journalists are likely correct in saying that his speech was 7 hours and 10 minutes. Castro delivered all of his speeches without looking at the notes.

Of course, the attention to the personal life of the Commander was unprecedented. Unlike Silvio Berlusconi or Nicolas Sarkozy, he was never public about it. Yet, he enjoyed an enormous popularity among women. According to some reports, women gave birth to more than 50 of his children. However, there is confirmed information about three women in his life.

His first lover was Mirta Diaz-Balart. It was she who gave birth to his son, the only legitimate son of the Cuban leader - Fidel Jr.. The second beloved woman of the Commander was the former star of Havana bohemians Nati Revuelta. She gave him a daughter, Alina, who in 1993 fled from Cuba with a fake Spanish passport. (Incidentally, Fidel's sister Juanita fled from Cuba to the US).

The third woman to hold an important place in the life of the Comandante was Celia Sanchez. She was his secretary and assistant. As they say, she was completely trusted by Fidel, but his younger brother Raul hated her. Officially, she committed suicide in mid-1980's. The opponents of the Castro brothers claim that she was actually killed by Raoul, but there is no conclusive evidence of this.

Finally, few politicians can boast that a film about them was banned by the US censorship. Director Oliver Stone made a movie about Castro, but NBO that had the rights to the film deemed it propagandist and glorifying. As a result, the film was banned in the US. This is how Fidel proved that even the US, the citadel of democracy, has censorship.

"Serenade of fidelity," a gay wedding dedicated to his birthday, 637 assassinations, long speeches, love of many women, and "attention" of the American censorship to his persona is enough evidence that Fidel's personality cult exists. It is hard to believe that this is the life of one man. The 85th anniversary of the politician once again reminded of his legendary greatness to both those who admire him, and those who hate him.