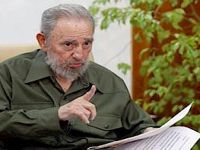 The U.S. would lose in a conventional confrontation, and a nuclear war against Iran is not an option for anyone, assured the leader of the Cuban Revolution, Fidel Castro.

Iran is a Muslim country that has millions of highly motivated and trained fighters determined to die. "These are people who will not be intimidated and force will not make change," said Fidel Castro in a conversation with the Canadian academic Michel Chossudovsky last October, distributed by the daily Granma.

The Iranians do not bend before force, and if the conflict kept its conventional character, it would be a war that Washington and Europe cannot win, claimed the Cuban leader.

"In any circumstance, that of Afghanistan is a joke, and another in Iraq, compared to what they would face in Iran, the armaments, the training, the mentality, the kind of soldier, will undoubtedly be the most fearsome adversaries against whom the United States would be faced," he affirmed.

If Washington-aggregated-made the mistake of using tactical nuclear weapons, it would produce in the world a great commotion and distress and control of events would escape from their hands.

In a nuclear war, they would lose it all. It is a war that we all would lose, Fidel Castro reinforced.

The revolutionary leader made reference to the antagonism and to the discussions of the Pentagon with the U.S. president, Barack Obama, there is no doubt what the Pentagon's decision would be if the chief theater of operations calls for the use of this weapon because they consider it necessary or essential.

"A war today is not a war as in the nineteenth century, before nuclear weapons appeared, war was already extremely destructive," he recalled.

"There is enough in just the limited number of the weapons that the less powerful two powers, India and Pakistan have. Their explosion would be enough to create a nuclear winter which it would be impossible to survive, no human being, it would last from 8 to 10 years. In a few weeks, the light of the sun would not be seen," predicted Fidel Castro.

"I think no one in the world wants the human species to disappear. And that is why I support the assessment that not only nuclear weapons should disappear, but also conventional weapons, said the revolutionary leader who defended peace for all people without distinction.

Now it comes to a question of demanding that the world is not driven to a nuclear catastrophe, it is a question of preserving life," he said.