On July 12, the legendary leader of the Cuban revolution Fidel Castro made a TV appearance for the first time in four years. He was a guest of a special issue of the popular Cuban TV show Round Table. 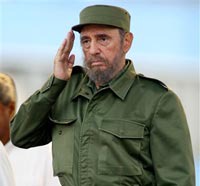 The 83-year-old Comandante has not appeared in public since 2006, when he underwent a major surgery on his intestinal system. After that, the process of devolution of power from Fidel to his younger brother Raul Castro had begun. In February of 2008, Raul officially headed the supreme government body of Cuba, the State Council. However, the new head of the country said that he always consults with Fidel on important decisions regarding domestic and foreign policy.

It is impossible to verify whether or not he really consulted with his brother. Fidel has not appeared in public. Sometimes rare footage from a hospital ward showing Fidel dressed in a sweat suit talking to his visitors would air on TV. Venezuelan President Hugo Chavez was the most frequent visitor. In addition, the official Cuban newspaper Granma would release articles signed by Fidel Castro from time to time.

The fact that the Comandante, who always had a soft spot for public speaking, avoided the public made many to speculate about critical condition of his health. Often these messages were distributed by the representatives of the Cuban exile community in the U.S., who fiercely hate Fidel. Several times messages appeared on line stating that the leader of the Cuban revolution has passed away.

Yet, it was too early to bury Fidel. As soon as the media released information about his worsened condition, the Cuban authorities or Hugo Chavez would state that the Commander was on the mend. Gradually, the elder Castro's health has become an element of the information war between his supporters and opponents. It is difficult to understand what the real state of affairs was since Cuba remains to be a fairly closed country.

Last weekend pictures were released showing Fidel visiting the National Centre for Scientific Research of Cuba on July 7. All employees of the institution immediately stopped working and rushed to greet the leader. In response, the legendary revolutionary made a short speech. Hispanic Internet was soon flooded with pictures of cheerful, absolutely calm Fidel who was strolling around the establishment without assistance.

On July 12, the Comandante finally made a TV appearance in Round Table show. Castro Sr. was wearing a dark blue track suit and a dark plaid shirt. He looked cheerful, though his face was thin. Fidel spoke rather slowly, but with confidence. He did not use the speech notes prepared in advance.

The show was dedicated to the issues of the Middle East settlement and the nuclear programs of Iran and North Korea. It is unlikely that the topic was chosen by accident. Fidel dedicated several recent articles in Granma newspaper to these issues, and now he was talking about them on TV.

The leader of the Cuban Revolution did not try to avoid harsh words in his speech. According to him, the policy of the U.S. and its allies against Iran and North Korea could result in a new world war, this time a nuclear one. Fidel believes that the main reason for a new global conflict will be the situation around North Korea. But the first volley would be probably fired in another corner of Asia when the U.S. and Israel attack Iran.

According to Castro, the consequences of an attack on Iran would be disastrous for the Americans. All Iranians age 12 to 60 undergo military training. Castro said that the Americans would face the resistance they had not seen in Iraq. Iran has been preparing for this attack for 30 years, the Comandante emphasized.

Fidel pointed out that Iran has powerful air forces, navy and ground forces. He said that the Islamic Revolutionary Guard Corps alone had a million people. He stated that he was confused as to why the U.S. had an impression that the Iranians would flee in the face of the enemy that wanted to destroy everything and openly spoke about it.

Fidel Castro’s public appearance has proved that the rumors about sharp deterioration of his health are greatly exaggerated. Despite his advanced age and formal removal from power, he remains an active politician.

The Comandante demonstrated to the entire world that he had been keeping abreast of key international issues. He showed that he remained loyal to himself and still did not shy from criticism of the Americans who had been trying to overthrow him in the past 50 years to no avail. However, one may disagree with his opinion that the world is headed for a nuclear war.