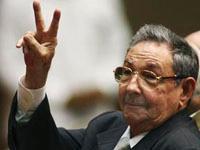 On June 3 the Cuban leader Raul Castro turned 80. For some, he is the hope for "perestroika", for others, he is the hero of the revolution, for the third group he is the shadow of his older brother Fidel. Who is the person who is ruling Cuba today?

Raul Castro Ruz was born on June 3, 1931 in the Cuban province of Oriente in the family of a landowner, a native of the Spanish region of Galicia Angel Castro. The family had five children, and one of them, Fidel, was truly a legend worldwide. Strictly speaking, Raul followed his brother nearly everywhere from the very young age.

Raul graduated from a Jesuit college, and studied at the University of Havana. He had an excellent career prospects before him under Cuba's pro-American dictator Fulgencio Batista who was in office in the 1950s. However, Raul Castro, along with Fidel, chose a different path joining the Union of Socialist Youth, and connecting with the active fighters against the regime.

Why did the Castro brothers fought with Batista who was supposed to be satisfactory to them? The answer, it seems, lies in the desire of the higher layer of the Cuban society to be masters of their land. In the 1950s Americans were the masters of the island. It was a resort where they arrived for a weekend, and the market for used cars. The entire policy of Cuba was consistent with the United States. The patriotically-inclined part of the local elite was unwilling to put up with it.

In July of 1953, the Castro brothers with a group of other revolutionaries launched an unsuccessful assault on the Moncada barracks in Santiago de Cuba. Raul showed miracles of bravery, having captured an officer of the government troops. After the failure of the assault, Castro Jr. escaped, but was arrested and imprisoned for 15 years. However, in 1955 he came under the amnesty and left for Mexico. Yet, showing generosity towards his opponents, Batista virtually signed his own death sentence.

In 1956, the Castro brothers with a small unit landed at their homeland and began an armed struggle. Gradually, they were joined by the ranks of thousands and thousands of new fighters, and their unit was transformed into a rebel army led by Fidel. Raul, who in early 1958 made a daring pass on the enemy's territory in the mountains of the Sierra del Cristal, was titled the Commander. A camp of revolutionaries was established that no one could stop.

On January 1, 1959 Batista's regime collapsed, and Fidel himself headed the country. Raul also got a piece of the "power pie." First, he oversaw the administration of his native province of Oriente, then became the commander in chief of the armed forces and minister of the Revolutionary Armed Forces of the Republic of Cuba. He was not appointed for the positions because of the family ties. At that time, 28-year-old Raul Castro had a glorious military past and very few people questioned his merits.

Next followed numerous positions in the leadership of the state and the party, and in all cases, he became a deputy of his older brother. In October of 1965, Raul Castro became the second secretary of the Communist Party of Cuba, in 1972 - Deputy Prime Minister of the Revolutionary Government. In 1976 he was appointed first deputy chairman of the State Council of Cuba. Everywhere he was close to Fidel, but Castro Sr., capable of giving long speeches for many hours, would always steal the show, even from Raul.

However, there was an area where Raul Castro has never been in the shadow of his brother - all things military. Back in the mid 1960's, he headed the committee of the Communist Party of the Revolutionary Armed Forces and public security. It was him who made the army of Cuba one of the strongest in the developing countries. Cuban troops distinguished themselves in Angola in 1987 where they defeated a strong army of South Africa.

At the turn of 1980-1990s the world socialist system has collapsed and Cuba, without renouncing the socialist choice, found itself in a very difficult position. U.S. has strengthened the economic blockade that existed since the early 1960's. At that difficult time, the military man Raul Castro became an economist and reformer, who was trying to save the country from a total collapse.

"For the country bread is more important than guns," said Comandante Raul and sprung to action. He reduced the size of the army and decentralized the management of the economy. Through his activities free trade zones and industrial parks appeared in Cuba. Castro Jr. allowed the markets where people could sell surplus agricultural poducts. Finally, foreign tourism started bringing considerable income, and a local resort of Varadero enjoyed great popularity.

Gradually, Fidel Castro's health deteriorated and back in 1997 he started talking about a possible transfer of power to Raul. In 2006, the long-time leader of the country underwent a serious surgery, and the transfer of power was launched. On February 24, 2008, Raul Castro was elected the chairman of the State Council, and in April 2011 he was given the last of the titles of his older brother - head of the Communist Party.

The current head of the Cuban State is constantly talking about his commitment to socialism, but in practice in the past three years a lot has changed. Cuba signed the International Covenant on Civil and Political Rights and the International Covenant on Economic, Social and Cultural Rights. Amnesties have been much more frequent than in previous years. The church was given a greater freedom of action.

Even more changes have occurred in the economy. Now the peasants are able to decide what to plant on their own land. Buying and selling real estate is not allowed, but the privatization of public housing is already possible. The restrictions on the use of mobile phones and the Internet have been lifted. The bans on hotel accommodation for Cuban citizens (previously it was only allowed for foreigners) and car rentals have been abandoned.

The recent innovations can be considered some type of the "New Cuban Economic Policy." Now in Cuba one can freely open restaurants and barbershops. Moreover, now one can take out loans to fund these businesses. Raul Castro has decided to abandon the card system that had become an integral part of life of two generations of Cubans. Finally, he decided to cut one in five public sector employees. This is really a true revolution, or counter-revolution - whichever you prefer.

In foreign policy, one principle remains constant - fierce criticism of nearly all U.S. actions. However, Cuba now has other friends besides Venezuelan leader Hugo Chavez talking about the commitment to socialism. Raul established excellent relationships with the leaders of Russia, China, Brazil, Argentina and many other countries. In many respects this is Fidel's achievement as well. Raul Castro, in this sense, continued the endeavors of his brother.

Can it be assumed that Raul Castro is the Cuban Gorbachev, or Cuban Deng Xiaoping? How independent is the current leader of the country in terms of decision-making or is he just enforcing the idea of ​​Fidel? It is difficult to provide a precise answer to these questions at this time. However, it is clear that Castro Jr. is not a pale shadow of his legendary brother. This is an independent person with the most colorful biography, whose birthday is an event not only of the national but also international scale.

He will be always compared to his brother only because he was second to him for half a century.