NATO rattles its weapons too close to Russian borders 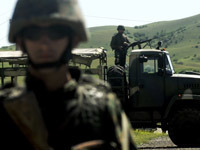 NATO troops are training for combat operations in mountainous terrain at the very borders of Russia, at the Sachkhere military base in Imereti, Western Georgia. This facility appeared there in 2005, when Saakashvili launched comprehensive preparation for the combat actions in South Ossetia.

Interesting details: according to the Georgian Ministry of Defense, the Sachkhere base will now host open trainings for military personnel from the NATO countries. For now this object will be officially assigned the NATO status.

In addition, according to Tbilisi, Georgian instructors that previously underwent integrated training by their French colleagues will participate in the training. The latter have been heavily involved in increasing the professionalism of the Georgian instructors for the past three years after the August defeat in South Ossetia.

It is no accident that at the opening ceremony of the Sachkhere preparatory school Deputy Minister of Defense of Georgia Nodar Kharshiladze was joined by the French Ambassador Eric Fournier.

The French diplomat and the senior Georgian military uncovered a commemorative plaque, which means that the database is assigned the status of PfP (Partnership for Peace). The representative of Georgia drew special attention to the fact that the base in Sachkhere was built by France.

This is the first NATO military training center in the Caucasus where both winter and summer maneuvers will be hosted. In September exercises will be held here involving troops from the Baltic States, Poland and the Czech Republic, many of whom have been here before. Subsequently, the arrival of troops from other NATO countries is expected.

Back in 2010, Georgian Ambassador to Ukraine Grigol Katamadze slipped that the "unique modern training of mountain shooters" is conducted in Georgia. Even back then, as he admitted, "the representatives of Great Britain, the United States and other countries" were trained there. Now everything will be official and in the framework of the "Partnership for Peace."

What the training will be like is anyone's guess. It is worth mentioning that the program of the functioning of the base implies its further modernization.

To improve the training, the Ministry of Defense of Georgia has developed special language courses. The training will be conducted in English.

Why does NATO need to mark its presence in Georgia in such a conspicuous way? Georgian and South Ossetian experts George Kadzhaya and Inal Pliyev shared their views in an interview with Pravda.ru.

George Kadzhaya, an independent Georgian political scientist: "Why is the presence of the base in Sachkhere such a surprise to Russia? The fact of the appearance of the French Ambassador here says that NATO takes Georgia under its protection and demonstrates to Moscow that if it repeats its aggressive actions, it will have to deal with civilized nations. And this is a further confirmation that Georgia is steadily moving towards NATO membership. "

Inal Pliyev, South Ossetian political scientist: "The construction of the facility in Sachkhere is a result of the efforts of France that built it almost on the border with South Ossetia. This once again highlights the militant attitude that Paris has been recently displaying towards other countries. If, however, we assess the situation with regard to purely local conditions, it is very similar to the preparation of a full-scale aggression against South Ossetia and Russia. It is clear that Georgia plays a secondary, subordinate role. Without a team of NATO, they will not do anything. And the second point- the very leadership of NATO is well aware of the provocative nation of their actions in such a difficult area of ​​conflict.

Equipping a valuable base for training of NATO troops is another link in the chain of strengthening of the position of the alliance in Georgia. We remember that until 2008, U.S. officials have solemnly assured that Georgian troops trained by the Americans would not be in South Ossetia. However, they have been here and were ignominiously defeated.

I also want to note that the situation is similar to that which existed before 2008, when fortifications and massed military units were installed along the perimeter of South Ossetia. Back in 2006 the construction of a large-scale military hospital and a morgue for 260 bodies was commenced, which resulted in closure of two educational institutions. And what we see today in Sachkhere may be the prologue to the emergence of new military bases in the West region that will pose threat for South Ossetia, Abkhazia, and Russia.

What do I mean by all this? It is not ruled out that foreign encouragers of Saakashvili will continue to reassure his aggressive ambitions against us. What did Georgian side do before to worsen the situation? They would carry out a terrorist attack and then would immediately, without any investigation, accuse South Ossetia of it and present it to the entire world as a terrorist enclave that has to be destroyed as soon as possible. This will artificially maintain instability in the region and create a situation for NATO to intervene. "
But there is more to it. We also know that combat troops not only of NATO but the alliance partners as well will be trained in the Sachkhere school, and the exact list is yet unknown. There was information that Armenian commandos were trained here. Georgia is also considering training the puppet Afghan army soldiers in Sachkhere.

One thing is clear: in 2011 the return of the Ukrainian military is expected that had been withdrawn hastily at the approach of the Russian and South Ossetian troops in August of 2008. Contradictory information appeared in the media about the events in Sachkhere at the time. Georgian media wrote that the base was captured by Russian troops on August 16, while there is another theory.

According to the latter, Russian soldiers indeed moved from South Ossetia to the base through the village of Perevi. However, the aforementioned French ambassador to Georgia Eric Fournier found out about this and immediately arrived to defend the French child with his own body. As a result, Russian troops stopped near the village of Perevi, just a few kilometers from the school at Sachkhere. Allegedly, the Russian specialists did not have a chance to see the objects erected there by the French.

As for the training of the Ukrainians, Sachkhere is expected to receive the troops of Separate Guards of Battalion 13 of the Army Corps stationed in the Carpathians.

Why does Kiev intend to send its military here and not any other place? According to the Ukrainian Defense Minister Mikhail Gzhel, "there is a well-established training center for military operations in the mountains in Sachkhere. There is something to learn about the equipment in the landfill and the armament of mountain rifle units and tactics of their actions."

However, this will not limit the military-technical cooperation between the two countries. According to a statement of the Ukrainian Defense Minister Michael Gzhel made in 2010, Ukraine is also ready to train Georgian troops "at the National Defense University, the Academy named after Nakhimov and other universities."

This in an additional signal indicating that the fraternal Ukrainian side took another step towards full restoration of military-technical cooperation with Georgia as it was under Yushchenko. Moreover, Ukraine is taking a step toward rapprochement with NATO.

Kiev justified it by the fact that supposedly it does not have mountain training centers. According to Michael Gzhel, "in Europe there are only two specialized centers for mountain training - in Austria and Switzerland," where the fees are too high for Kiev. The Ukrainian military was not entirely truthful. It would be ridiculous to imagine the German, Italian and French mountain shooters without their own training centers in the Alps.

One gets the impression that NATO troops are going to purposefully work at learning how to conduct hostilities in the Caucasus region under specific terrain conditions. From now on they will be doing it almost openly under the guise of peace-loving slogans.