Russia Today TV channel journalists, who worked in the city of Tskhinvali, accuse CNN of forgery in the coverage of the conflict between Georgia and South Ossetia, RIA Novosti reports. 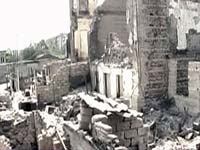 The statement was made Monday by a correspondent of Russia Today, Nikolai Baranov, during a round table discussion devoted to the recent events in the Caucasus.

“Our crew was making a report about Tskhinvali ruined by the Georgian army. We particularly were filming the University of South Ossetia. We were very surprised and indignant to see this footage on CNN presented as the Georgian town of Gori, which the Russian army supposedly attacked. We still have the original video material of Tskhinvali in ruins. The footage aired by CNN has been forged and fabricated,” Baranov said.

CNN also used the footage from the Kodori Gorge of Abkhazia to show it as a report from Gori, the journalist added.

TV journalist Alexander Minakov, who analyzed the coverage of the conflict by the Western media, particularly by US channels, said that Georgia’s war in South Ossetia had struck a catastrophic blow on their reputation. US TV channels cast a veil on events in an armed conflict and even fabricated their reports at times, like CNN did.

“The Western media were involved in a special operation titled “Russia’s Aggression,” the journalist concluded.

An official representing the Moscow department of CNN said that the TV company had not taken any efforts to fabricate its reports. “There might have been a mistake in the preparation of the reports in question,” he said.

Maksim Bobrov, a First Channel correspondent, said that the Georgian government ordered to cut the broadcast of all Russian channels in Georgia and blocked access to the .ru zone of the Internet.

“They did not let our crew cooperate with Georgia’s Rustavi-2 channel to report the situation in Tbilisi. The Georgian media presented the desertion of Georgian troops as the retreat of the Russian military,” he said.