Russian Channel 1 presents a documentary ‘Plan Caucasus’ about the plan of western intelligence service to make Caucasus the battlefield between the Western world and Russia. 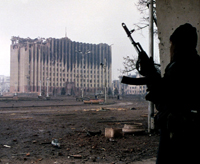 The reporter states that the first point was the ignition of Nagorny Karabakh conflict and then in other places of Caucasus via the nationalistic moods strengthening.

A Chechen man Abu Bakar, a news analyst of the German radio station «Freedom” in the 60s, who worked under the pseudonym Berkan Yashar, reveals the secret plans of the US Foggy Bottom. Baker was enrolled by the USA, and even after he left ‘Freedom’ and headed for Turkey, where he became a powerful authority, Abu remained a “grey eminence”, through whom the West controlled the situation in Caucasus and financed separatists’ tribes.

He said that the plan of Chechnya annexation was backed by Germany, France, Great Britain, Turkey and Saudi Arabia. His words were proved with pictures of money, printed in Germany that might still be in the Munich factory, and fake passports, printed in France.

His words are confirmed by some other people. Thus, Shamseddin Yusef, the Foreign Secretary in Dudaev’s government, says: “CIA people even took us to London. Then the war in Iraq started. They planned to take over Chechnya after the victory in Iraq, but that war didn’t finish as soon as they predicted.

Neither does Richard Perl, the ex- US Ministry of Defense counselor and one of the key strategists of the war in Iraq, conceal the fact that America tried to give spiritual and financial support to Dudaev.

The reporter also states, that Western powers pursued in Caucasus not only political, but financial interest as well. Since 1992 with Jokhar Dudaev’s help there operated a contraband canal that exported to the West Russian diamonds and gold. For the right to drive it through Chechnya Dubaev got a quarter of the profit received from diamonds’ gem-cutting and selling.

After the airport in Groznyy was shut in 1994, Berkan changed the scheme of diamonds transportation and started to put them across Pankiyskoe clove to Turkey.

Akhmed, one of Dudaev’s mates, states that the bloody story of Chechen diamonds goes on even now. The money, saved between the First and Second Chechen Wars, was put in the diamond mines of Africa.

The input of money into these mines gives enormous profits to Akhmed Zakaev and Whice Akhmadov, the man, whose name was mentioned in relation to Badri Patarkacishvili’s death.