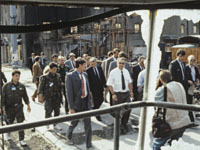 One of the EU and NATO countries for the first time was found guilty of killing people during the war in Bosnia and Herzegovina in 1992-1995. The International Court of Justice in The Hague placed some responsibility on Holland for the deaths of Muslims at Srebrenica in July of 1995. Until now, the West tried to portray the Bosnian Serb leaders Radovan Karadzic and Ratko Mladic as the only culprits of the tragedy.

The court decision was issued on the eve of July 7 - the 16th anniversary of the tragic events at Srebrenica. The lawsuit against the UN Dutch peacekeeping battalion was initiated by the relatives of an electrician of "blue helmets" Rizo Mustafic. In addition, a translator of the Battalion Nuhanovich Hassan, who lost his father and his brother, also decided to sue the Dutch. In their claims the Muslims stated that the peacekeepers actually gave their relatives to the Serbs storming Srebrenica.

Note that the Muslims have repeatedly tried to sue the Dutch peacekeepers for inaction, but until now to no avail. Thus, the Court of the Netherlands three years ago dismissed the current plaintiffs, and they went to the International Court. Now the authorities will be obliged to pay the Dutch victims compensation for the fact that the peacekeepers failed to prevent loss of life of the people working for them.

The decision was to some extent sensational. Until now, the West (and the Hague Tribunal) had placed the entire responsibility for the deaths of eight thousand Muslims in Srebrenica on Bosnian Serb leaders Radovan Karadzic and Ratko Mladic. However, general Mladic, who was in charge of the operation, said that he gave the order to evacuate and was ready to guarantee the safety of civilians, while all the blood was shed behind his back. He also pointed out that only two thousand dead bodies were found near the town, and not eight.

One way or another, but the Dutch contingent of the UN did not prevent the bloodshed. Srebrenica was the city whose safety was their direct responsibility. No matter what Mladic did, and no matter how much shelling of the Serbs by the Muslims entrenched in the city was going on, the "blue helmets" are still to blame. They are to blame for the fact that there was firing at Serb positions in the security zone, and that the Serbs broke into the city.

In addition, the story raises the question of how the UN "blue helmets" behaved during the war in Bosnia and Herzegovina in 1992-1995. Their mandate to the entire territory of the former Yugoslav republic was circulated in September of 1992, and in May of that year they appeared in the vicinity of Sarajevo. The Dutch peacekeepers were silently watching the Muslim militants of Naser Oric (there were many mercenaries from the Islamic countries) cut the Serbs in Srebrenica and its surroundings.

Speaking of Srebrenica, the West has consistently pointed out that Mladic was after the "Muslim enclave." However, before the war, Serbs accounted for more than a quarter of the population of the city. Where did they go? From May 1992 to January 1993 they were systematically eliminated by the Muslims with the connivance of the UN. As stressed by Mladic, approximately two thousand Serbs died from the hands of Muslim militants. The homes of the Serbs who escaped from Srebrenica were invaded by Muslims.

Gradually, the Serbs seized the military initiative and began reconquering the lost. In the spring of 1993, the troops under the command of Mladic approached Srebrenica, but did not take the city, because on May 6 of that year a resolution was adopted by the UN Security Council. It declared Srebrenica, Tuzla, Sarajevo, Zepa, Bihac and Gorazde "safe areas" under UN protection. The Serbs asked to include in the list a number of Serbian cities constantly attacked by the Muslims, but they were not heard.

The largest Russian expert on the Yugoslav crisis Elena Guskova in her "Politics of the UN and NATO military operations in the former Yugoslavia in the 1990s" notes that these Muslim enclaves were far from "security areas". The UN Security Council did not require them to withdraw military forces, "so the Muslims used these areas as their staging areas for concentration of forces and firing at Serb positions."

Incidentally, in November of 1995 this was admitted by the former UN Special Representative Yasushi Akashi. He openly declared that "safe areas" in Bosnia and Herzegovina were used by the Muslim Government to train and re-equip the army, which, in fact, provoked the Serbs. Akashi earlier proposed to change the format of the "safe areas ". Yet, the West did not want to listen to him.

Regarding the events in Srebrenica, this meant the following. Under the cover of the Dutch peacekeepers, the Muslims conducted armed attacks in the direction of Serbian positions. Mladic had limited opportunity to respond. The shelling of the city would mean a violation of the UN resolution. In addition, by the summer of 1995 the Bosnian Serbs were in complete diplomatic isolation, their positions were shelled by NATO planes. However, they could not tolerate incursions of Muslims infinitely.

Dutch peacekeepers were not neutral. It is noteworthy who filed the current lawsuit. In one case we are talking about a translator, Muslim, and in another - an electrician, also Muslim. This means that "blue helmets" employed representatives of only one side of the conflict. The Serbs, too, could have been translators as they have the same language. This was not the case. Incidentally, the accusation that the Dutch did not try to help their employees is not entirely true.

In early July of 1995 Mladic began storming Srebrenica, and Holland rushed to aid the Muslims - its aircraft struck at Serb positions, and destroyed a tank. But they did not particularly appreciate the aid, and fired at the positions of peacekeepers. Several soldiers of the peacekeepers were killed, and some simply ran over to the Serbs for their lives. Only after that the Serb forces stormed the city, where, according to the Hague Tribunal, up to eight thousand people were killed, and 30,000 became refugees. The tragedy of the local Serbs was accompanied by the tragedy of Muslims.

Yet, in some ways the Muslim plaintiffs are right. Holland and its peacekeepers are really responsible for the events in Srebrenica. "Blue helmets" simply did not do their job. They did not suppress the attacks by Muslims in the Serbian position, they were inactive when the Muslims were slaughtering Serbs, and turned the city into their enclave. When the Serbs decided to respond, the vaunted peacekeepers first openly sided with the Muslims, and then simply ran away.

The tragedy in Srebrenica of July 7, 1995, had its own pre-story that the West deliberately hushed up. It now appears that this conduct does not suit even those who openly sided with it. The current decision of The Hague court dispels the myth of the courageous peacekeepers and the fact that Karadzic and Mladic were exclusively to blame for the tragedy of Bosnia (or even exclusively, local Serbs, Muslims and Croats). For the first time, it was officially confirmed that the country that is a member of the EU and NATO is guilty of a terrible tragedy.

Now multitudes of claims against peacekeepers from other countries who did nothing in Bosnia, Croatia and in the brutal liquidation of Serbian Krajina, are expected to start flowing into the Hague tribunal. The Serbs, Croats, and Muslims have good reasons for it. There were many Srebrenica-like situations during the Yugoslav massacre. Every tragedy has its own background, and in many cases, the "blue helmets" were, to put it mildly, not at their best. Sometimes they even condoned anti-Serbian policies of their governments.