Croatia to destroy fragile peace in Bosnia and Herzegovina 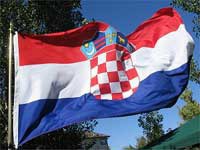 A fragile peace in Bosnia and Herzegovina (BiH), established 15 years ago after the bloodiest massacre in postwar Europe, could be threatened. President of Croatia Ivo Josipovic has complained about the situation of his compatriots in Bosnia, and hinted at the need to revise the Dayton Accords that ended the war.

The other day Josipović visited the USA, where he participated in a conference marking the 15th anniversary of the signing of the Dayton Accords. Noting its historical role, however, he expressed dissatisfaction with the situation of the Bosnian Croats. He said that the Dayton Agreement fulfilled its most important function and stopped the war and provided Bosnia a new path. Yet, it did not solve all the problems. He added that today everyone recognized that Bosnia and Herzegovina need some changes, primarily in terms of equality of all nations.

Responding to the questions from journalists, the Croatian leader said that 15 years after the war it was time to remove the taboo on discussing the issue of the situation of the Bosnian Croats. Josipovic noted that the existence of the problem is recognized by the members of the Muslim and Serbian communities. He expressed confidence that eventually a compromise solution will be found, which would allow the Croats to influence the policy of Bosnia and Herzegovina to a greater extent.

Josipovic's words can be considered if not a bomb, then certainly a statement of the fact that the situation in Bosnia, which is virtually a protectorate of the West, is far from ideal. Particularly noteworthy is the fact that such statements were made not by Serbs who have long been appointed guilty for all the conflicts in former Yugoslavia by the U.S. and Europe. Catholic Croats are the flesh of the Western world and have been always favored in Brussels, Washington and Berlin.

Today, there are approximately 600,000 Croats in Bosnia (nearly 14 percent of the population). Along with Muslims, according to the Dayton Accords mentioned by Josipovic, they are a state-forming nation of the Federation of Bosnia and Herzegovina, where the proportion of the Croatian population is just over 20 percent. In turn, the Federation of BiH along with the Republika Srpska is a part of the "greater" Bosnia and Herzegovina recognized by the international community.

Formally, the Croats should not have any reasons for grievances. Their representative serves as the president of the Federation of BiH, periodically (on a rotating basis) they are heading the Bureau of the "greater" Bosnia. Local Croats have their own parties. Unlike the Serbs who were under the NATO bombings in 1994-1995 and whose territorial integrity was threatened by the West, the Croats were the West's favorites. However, it is not that simple and clear.

Until 1878 the territory of Bosnia was a part of the Ottoman Empire, and Croats (along with Serbs) were the oppressed minority. Then this land became a part of Austria-Hungary, and there was no unity in the ranks of the Croats. Some of them along with the Serbs fought to create a single Yugoslavia state, while others, in contrast, had anti-Serbian attitudes. After 1918, Bosnia became a part of the future Yugoslavia controlled by a Serbian king. That was when the Croats, along with Muslims, expressed their discontent.

During World War II, Bosnia became a part of the Independent State of Croatia (NDH) that allied with the Nazi. Croatian Ustashi along with the Muslims organized retaliatory attacks on Serbs who responded with violence. However, there were those among Muslims who were dissatisfied with the Croatian dominance as they remembered that once they were the dominant nation. Therefore, it would be an exaggeration to consider the Croats and Muslims to be the half-brothers in the fight against the Serbs.

When in 1991 the disintegration of Yugoslavia began, Bosnian Croats, along with the Muslims of Bosnia, spoke in favor of separating from the SFRY. Since the local Serbs had a different point of view, we could talk about the Muslim-Croat alliance again, which this time was supported by the U.S. and the EU. In the first half of 1992, the Croats were fighting with the Muslims against Serbs side by side. However, something has made them disagree.

The desire of the Muslim leader Alija Izetbegovic to create the "one and indivisible Islamic Bosnia" was unacceptable for the Croats. In the spring of 1992 the Republic of Herceg-Bosna that went to a truce with the Serbs was established in western Bosnia. The supporters of the "united front against the Serbs" were defeated, and the line towards joining the western parts of Bosnia to Croatia became more obvious in the actions of the Bosnian Croat leadership.

As a result, a bloody war between Muslims and Croats in central Bosnia that flared up in the second half of 1992 continued throughout 1993. The army of Croatia fought on the side of the Bosnian Croats, while Islamic militants and Osama bin Laden himself fought on the side of the Muslims. At the same time, clashes between Croats and Serbs in Bosnia were more local in nature, in sharp contrast to the bitterness of the Croat-Serb conflict in Croatia.

The Union of Muslims and Croats against the Serbs was revived at the order of the United States in early 1994. Bill Clinton personally made the Croatian President Franjo Tudjman go for an alliance with the Muslims, threatening Zagreb with sanctions otherwise. As a result, the union lasted until the signing of the Dayton Peace Accords in December of 1995. When solving the issue of the status of Bosnia, the Croats by the will of the U.S. and EU were joined with Muslims in the Federation of Bosnia and Herzegovina, largely against their will.

Being only the third nation in Bosnia in terms of numbers, Croats cannot influence the policy of the country in full. Therefore, the current president of Croatia Josipovic said that it was time to correct the situation created in the late 1995. It is crucial that these words were spoken not by one of the Serbs but the country's president, a member of NATO and nearly a EU member. It means that the guy accepted by the West indicated that the state of affairs in Bosnia patronized by the U.S. and the EU is not that great.

Will the Croats seek the status of the national unity, which will certainly be opposed by the Muslims? Is BiH close to another war? Vadim Prozorov, Associate Professor of History Department of the Moscow State University, commented on the words of the President of Croatia, the situation of the Bosnian Croats and the general state of affairs in today's Bosnia and Herzegovina for Pravda.ru:

"Dayton Accords established an abnormal situation in Bosnia and Herzegovina that has not changed and that can only be changed by a miracle. Strictly speaking, this is what drew the attention of the president Josipovic. However, there is no real infringement of Croats in BiH. Dayton Accords took into account their interests, as much as their interests can be taken into account in this very ugly public union.

At the same time, the Croats can complain about many things. Higher birth rate among Muslims with whom they co-exist within the Federation of BiH is not in their favor. Economically, Bosnia and Herzegovina in its present form is not viable, and the level of life there is much lower than in Croatia. While the Dayton Accords remain in force, it is impossible to change this state of affairs.

At the same time we cannot say that today there are strong separatist attitudes among the Bosnian Croats and that the country is on the brink of a war. The Croatian leaders have no reasons to challenge this. Both countries want to get into the EU, and therefore should play by the rules. These rules include sticking to the Dayton Accords. Changing the Dayton Accords is the only thing that can change the picture, but this is out of the competence of Bosnia, Croatia and Serbia and within the competence of the great powers."