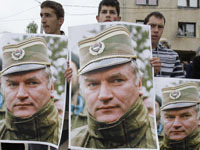 Former Bosnian Serb, military leader Ratko Mladic was brought to the prison of the Hague Tribunal. Meanwhile, the debate about whether the country's leadership had the right to extradite the general to The Hague is ongoing in Serbia. For many, even 15 years after the war in Bosnia and Herzegovina he remains a national hero.

The news that Mladic was being extradited to The Hague surfaced on May 26, when Serbian President Boris Tadic announced his capture. A day later the court decided to extradite him to The Hague tribunal, where he is accused of genocide and crimes against humanity. The General's defense filed an appeal, but the Special Court in Belgrade rejected it. Mladic was allowed to visit the grave of his daughter, and later under heavy guard he was taken to the airport. Late at night on May 31 Mladic was brought to the prison of the Hague Tribunal, and on June 3 for the first time he will be brought before the International Court. The General himself vehemently denies the charges.

Meanwhile, Serbia is continuing a fierce debate, arguing whether the General's extradition to The Hague was the right thing to do. Serbian Radical Party (SRS) that is considered nationalistic stated that it strongly condemned the regime of Boris Tadic for the shameful extradition of the Serbian hero, General Ratko Mladic. They added that this "treacherous act" was threatening the survival of the Republika Srpska (Bosnia and Herzegovina. - Ed.) and the country's national interests. They stated that all members of the Government will be responsible for their treacherous acts.

The party officials decided to seek the resignation of the President and the government. They called on the Democratic Party of Serbia, headed by former President and the Prime Minister, to join the initiative.

The question arises: how many Serbs, along with PSA, believe that Mladic is a hero? Elena Guskova, an expert of the Hague Tribunal, director of the Center for the Study of Modern Balkan Crisis of the Institute of Slavic Studies RAS who is based in Belgrade provided her comments in an interview with Pravda.ru.

"Yes, there is evidence that the majority of Serbs believe so. Look at the large number of protests in Belgrade and the Republika Srpska capital Banja Luka," she said.

"Indeed, in recent days in Serbia and the Serb areas of Bosnia protests erupted in which the participants expressed dissatisfaction over Mladic. Large-scale demonstration at the parliament building in central Belgrade on May 29 ended in clashes between the police and youth. Over 30 people were injured, and more than 200 were detained by law enforcement officers. The reinforced convoy at the airport transferring the General was clearly necessary.

Opinion polls show that 40 to 80 percent of the population of Serbia still considers Mladic a national hero. In any case, we are talking about half of the Serbs. There are many explanations to it. One of them is the dissatisfaction with the national composition of those accused by the Hague Tribunal. Although the crimes were committed by all sides, the vast majority of prisoners in The Hague awaiting a sentence are the Serbs.

Over one third of the population of Bosnia and Herzegovina was Serbs who, at the behest of the international community, were not allowed to reunite with their national state. 20 years ago, the Muslim leader Alija Izetbegovic saw his country as an Islamic state, where there was no place for the Orthodox Serbs. Muslim militants and mercenaries (including those from the al-Qaeda) were killing the Serbs. Mladic, in the eyes of many of his countrymen, is the man who resisted the Islamists.

Finally, one can remember the biography of Ratko Mladic, whose popularity among the people is clearly higher than that of Milosevic. In contrast to the former Yugoslav president who was building his political career, Mladic was a military officer who became involved in politics by force of the circumstances. He was never accused of corruption, nepotism and political blunder that Milosevic was often accused of. In this sense, the General is a more indisputable figure for the Serbs than the late head of state.

At the same time, Artem Ulunyan, head of the Balkan Center of the Caucasian and Central Asian Studies with the Institute of World History, in an interview with Pravda.ru stated that Mladic's popularity among the Serbs is decreasing.

"The fact that Mladic is popular is due to the echo of the war and the wounds that have not yet healed. This is not only the Serbs. In Croatia, many resented the verdict of the Hague Tribunal for General Ante Gotovina. A similar pattern is observed with the Kosovo Albanians. After some time the issue will be removed from the agenda. For many Serbs, Mladic, while heroic, is still the past. The past cannot live indefinitely, although one cannot blame the Serbs for having such a hero," the expert believes.

"Today's Serbs see themselves in Europe. By the way, they indicate that the former Yugoslavia (SFRY) was close to Europe and Serbia, and it is time to return this intimacy. This is not only about joining the EU, but also about the admission to NATO, no matter how strange this seems after the bombings in 1999. Almost all the neighbors are already members of NATO, and the country simply does not have any other ways. Mladic is incompatible with this path," said Ulunyan.

Indeed, many Serbs see their country as a part of the EU. Not without reason in the parliamentary elections three years ago the coalition "For a European Serbia," led by President Tadic, took the first place. In the end, the people elected him as President. Is this explained by the desire to join the highest European ideals? Today in Europe there is a million of Serb guest workers. The breakup with Europe would put many of them on the brink of survival.

If we combine the data from the opinion polls and the results of the election, we would get an amazing picture. Even among those who vote for pro-Western Serbian political parties there are those who believe Mladic is a hero. It turns out that the desire to be a part of the EU and willingness to defend the rights of the Serbs to unite into one state with weapons in their hands perfectly coexist in the minds of many members of the South Slavic people.

However, the West in the face of the EU is unwilling to put up with this combination. It demands that the Serbs not only swallow the arrest of Mladic, but also extradite those the tribunal is looking for. There is only one such person left - the former leader of the Serbian Krajina in Croatia, Goran Hadzic. The capture of the latter will not necessarily guarantee that Serbia will be allowed into the EU. Some EU countries, as a condition of membership, demand the recognition of Kosovo's independence. It seems that even pro-Western Tadic is not ready for this."

Is Serbia, extraditing General Mladic, paying too high of a price for the still obscure European future? The answer to this question will be obviously provided by the results of the presidential and parliamentary elections in the country scheduled for next year. In the meantime, the Serbs are undecided. On the one hand, Mladic seems to be a hero. On the other, "many people" at a rally in his support in Belgrade is only ten thousand.