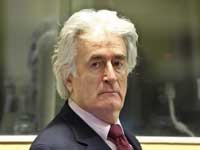 The Hague Tribunal continues the trial of once the most wanted man on earth - the former Bosnian Serb leader Radovan Karadzic. For some, he is a war criminal who has wiped out tens of thousands of people. For others, he is the symbol of the struggle of the Serbs for their rights and statehood.

Radovan Karadzic was born on June 19, 1945 in Montenegro. In the late 1950s his family moved to Sarajevo. In the capital of Bosnia-Herzegovina in 1971, he graduated from medical school at the local university, specializing in psychiatry. In his youth, he took part in student rallies, but never claimed to be a nationalist. In addition, he has repeatedly said that "nationalism was a much greater evil than communism."

In the 1970s, Karadzic worked as a psychiatrist at a hospital in Sarajevo, helping players of a local football team to alleviate stress. At the turn of the 1970s and 1980s he lived in Belgrade for some time, where he studied literature. He published several volumes of poetry (including children's), and novels. Many of them have been published at the time when he was wanted internationally.

In late 1980s, Communist rule in Yugoslavia was unstable, and politicians who exploited nationalist ideas gained increasing popularity in the republics. Radovan Karadzic, who in 1989 established Serbian Democratic Party in Bosnia-Herzegovina, was not one of them. He understood that in Bosnia, where representatives of the three communities (Muslim, Serb and Croat) live side by side, there would be three types of "nationalism," which is fraught with a war. He therefore advocated "universal democratic values."

Nationalists who spoke for the secession of Bosnia from Yugoslavia and the establishment of an Islamic state became increasingly more popular among Muslims. The nationalist Croatian Democratic Union became popular with the Croatians. Karadzic and his Social Democratic Party were popular among Serbian voters.

In 1991, Muslims and Croats, ignoring the opinion of the Serbs, headed for the withdrawal of Bosnia from Yugoslavia. In response, Karadzic has dramatically changed his political platform and began asserting the interests of his fellow nationals instead of "universal values." He announced that in case of dissolution of the unified Yugoslavia, the Bosnian Serbs will unite with Serbia that then was still a part of the former Federal Republic of Yugoslavia (FRY). "Do you really think that we, the Serbs, will reconcile with the dismemberment of Yugoslavia and the forcible separation of the Serbian nation?" he explained his position.

In spring of 1992, the international community with the filing of Germany (to a lesser extent other EU countries and the U.S.) recognized the independence of Bosnia, which broke out a terrible massacre. Muslims fought for "a unified Islamic Bosnia and Herzegovina," the local Serbs and Croats have established their own national entities expecting to unite with "their" states. On April 7, 1992, in the Sarajevo suburb of Pale, Republika Srpska was announced. Radovan Karadzic became its first President. The international community has not acknowledged the new entity.

The Bosnian war, in which Karadzic was one of the central figures, continued from 1992 to 1995. It claimed 200,000 lives. Fierce fighting is attributed to the fact that the three peoples live in Bosnia side by side, with virtually no pure ethnical areas. In order to fully take this or that territory under control, all parties often either killed or expelled the "aliens."

The man who used to treat people and write poems now appeared in public almost exclusively in camouflage. Karadzic and General Ratko Mladic have managed to create quite a strong army of the Republika Srpska. By the beginning of 1994 it controlled almost two-thirds of the territory of Bosnia-Herzegovina. Detachments of the Muslims, aided by foreign mercenaries from the Islamic countries, have suffered defeat after defeat. (Karadzic barely fought with local Croats).

The Western world watched the success of Bosnian Serbs with horror. Since 1994, NATO has not just put pressure on them - it conducted airstrikes at their regular positions. American and European media called Karadzic the main culprit of Bosnian massacre. Established in 1993, The International Tribunal for the Former Yugoslavia (better known as The Hague) declared its desire to see him in court on charges of war crimes. Nothing was said about the leaders of Muslims and Croats.

Putting all the blame for the Bosnian events on Karadzic was at least strange. We can think at least about Islamic mercenaries cutting heads of Serbs and Croats. And the fact that none other than Osama bin Laden fought in Bosnia. As a manifestation of gratitude for the "services," the President of Bosnia-Herzegovina and the Muslim leader Alija Izetbegovic granted him Bosnian citizenship. Local Croats, who were openly helped by the army of Croatia, did not display humanism either.

Incidentally, Karadzic was never an opponent of peace negotiations. "Bosnia is a common house for three fraternal peoples," he said in 1993. But further Karadzic remembered how, during World War II, the Croats and Muslims slaughtered the Serbs in Bosnia. "That's why we are entitled to ask Muslims and Croats a few questions: Aren't we, the Serbs, entitled to not trust you, given your track record during World War II? " he asked.

All of the most prominent diplomats of the world, including U.S. Secretary of State Warren Christopher and the German Foreign Minister Klaus Kinkel have met with Karadzic. He was demanded to recognize the independence of Bosnia and abandon the idea of unification with the Federal Republic of Yugoslavia. The West did not want to listen to Karadzic's arguments that no one can divide the Serbian people and yield to the authority of Muslim zealots like Izetbegovic.

In August of 1995, NATO inflicted a number of airstrikes on the positions of Bosnian Serbs positions, while Belgrade (in exchange for the lifting of international sanctions) has ceased to support the Republic of Srpska. Unable to resist the entire military machine of the West, the Bosnian Serbs have left a number of areas. In December of 1995, the Dayton Peace Agreement was signed, which turned the Republika Srpska into one of the two components of the confederate (but united) of the Commonwealth of Bosnia and Herzegovina, where Representatives of three communities become presidents in turn.

The further history of the Balkans was written without Karadzic. In 1996, under Western pressure, he resigned as the leader of the Republika Srpska. He was awaited at The Hague Tribunal, but the poet, psychiatrist and politician was in no hurry. "If a real judiciary body worked in The Hague tribunal, I would be willing to go there. But the tribunal is a political institution, organized in order to shift the blame on the Serbs," he said in February of 1996 in an interview with British newspaper The Times. That same year, Karadzic has disappeared.

For many years he was the most wanted man in the world. The West promised to give five million dollars for his head. For many Serbs, he became a national hero who fought for the unity of its people. Yet, for some he is a war criminal. The pro-Western Serbian President Boris Tadic has repeatedly promised the U.S. and Europe, that, as soon as Karadzic is found, he will be immediately extradited to The Hague.

On July 21, 2008 a sensation spread throughout the world - Radovan Karadzic was arrested in Belgrade. It turns out that he lived in the Serbian capital for many years, under the name Dragan Dabic, and worked as a psychiatrist in private practice. Bosnian Serb leader has changed beyond recognition. The once clean-shaven face displayed a big white beard. It turned out that some anonymous source told the Serbian secret services that the voice of his psychiatrist reminded him of Karadzic. The rest was mere details. Dabic-Karadzic was detained and sent to The Hague.

For the past two years, the former Bosnian Serb leader is the "star" prisoner of the Hague prison. He constantly says that he had to simply react to the aggressive actions of the Muslims. Many of his arguments sound convincing. The stated information may not be liked by many powerful people far beyond the Balkans. After all, the participants of the massacre in Bosnia were not only local Muslims, Serbs and Croats, but also leading Western countries and international organizations.

Each performance of Karadzic in The Hague is an event of global significance. This is not surprising - after all, he reveals many mysteries associated with the unleashing of the bloodiest war in Europe in the second half of the twentieth century.