US sniper meets Bush with his pants down

This weekend the US President George Bush took a two-day visit to Sochi. There had been held the strictest security measures. The day before George Bush arrived several planes with the security guards landed in the city. The planes also contained personal cars for the Bushes, and such great amount of special equipment that it was decided to rent some extra local transportation. 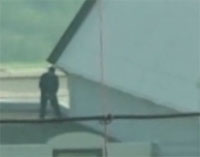 US sniper meets Bush with his pants down

It was asked to dismantle the back seat in all the rented buses. Instead Americans put there some strange black boxes. Experts suggested that these boxes might contain equipment that either fixed the location and movement of the bus or destroyed the electronic guidance of means of destruction.

An hour before the Bushes arrived in the airport the whole area was penetrated with the US security. Special Forces soldiers were placed almost in every 5 feet of the summer field whereas the snipers occupied the roofs of all the houses nearby.

Russian side also took the most serious security measures for the special guests. The road traffic was limited, and each 300 feet of the road to Vladimir Putin’s residence “Bocharov ruchey” was guarded by the representatives of Road Patrol Service. Everyone has been longing for the arrival of the №1 American plane.

It remains uncertain what the sniper would have done if he had at that very time to maintain defense of George Bush. Perhaps he would be able to protest his president with a different type of gun.

Luckily, the US president had nothing to worry about, so the sniper confidently pulled up his pants took back the gun and confidently strode away.

One of the experts noted that sometimes when the snipers are not allowed to move for several days they have nothing to do but empty the intestinal canal right there, but this is an absolutely different case. So the US president might consider pointing to his security’s discipline or buying them a huge pack of diapers.