Hillary Clinton to be female version of George W. Bush?

Hillary Clinton is not so smart as she is painted to be. She lost the inseparable part of the political race, the TV debate with Barack Obama. Moreover, Hillary Clinton showed that she had to learn a lot about international affairs outside the United States. 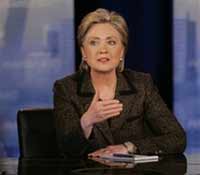 Hillary Clinton to be female version of George W. Bush?

It is worthy of note that Obama failed short of the occasion too. The question from TV host Tim Russert about the successor of the Russian president stumped the two politicians. Hillary Clinton attempted to come out clean of the confusing situation with the help of abstract phrases.

"I can tell you that he's a hand-picked successor, that he is someone who is obviously being installed by Putin, who Putin can control, who has very little independence," she said.

"This is a clever but transparent way for Putin to hold on to power, and it raises serious issues about how we're going to deal with Russia going forward," Clinton continued.

If Clinton becomes elected president of the United States, she would have meetings with a person who only takes the position of Russia’s president, whereas Putin will be the person to make all decisions, as she put it.

When the TV host asked his simple question about the name of Putin’s successor, Clinton had to struggle to get it out: “Med…Um…Medvedev, whatever,” she finally said.

When Russert addressed to Clinton’s opponent with the same question, he was apparently expecting a more detailed and intelligible answer. However, Obama did not justify the expectations. He at first criticized Bush’s attitude to Russia.

"Bush then proceeded to neglect our relationship with Russia at a time when Putin was strangling any opposition in the country, when he was consolidating power, rattling sabers against his European neighbors, as well as satellites of the former Soviet Union," Obama said.

He said Medvedev "is somebody who was hand-picked by Putin." "Putin has been very clear that he will continue to have the strongest hand in Russia in terms of running the government," Obama said.

Experts unanimously concluded that the TV debate showed Obama’s advantage over Clinton, despite the confusing moment with the name of the Russian presidential successor. One could see that Hillary Clinton was being nervous during the discussion, whereas Barack Obama was staying absolutely concentrated and calm.