Ex-oligarch Guerman Sterligov is now living on the outskirts of the Moscow region. A couple of years ago he used to live where the majority of wealthy Russians live, in a luxurious settlement on Rublevo-Uspenskoye Shosse near Moscow. Guerman Sterligov became an oligarch at dawn of perestroika when he opened Russia's first stock exchange and called it Alisa. He also became famous after a scandalous advertising campaign of a coffin-making company. He says that when he became incredibly rich, infamous oligarchs Vladimir Gusinsky and Mikhail Khodorkovsky were borrowing money from him. Guerman Sterligov grew poor after his pre-election campaign when he was running for the Russian president but lost the election. After that he had to sell his villa on Rublevo-Uspenskoye Shosse and withdrew to backwoods together with his family. 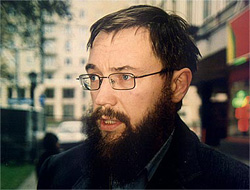 Now Guerman lives in a remote deserted settlement situated sixty kilometers away from a small town somewhere in the Moscow region. It is impossible to get directly to the place even in an all-road car. The place teems with wolves, and this proves that the ex-oligarch has settled in absolute wilderness this time. Guerman Sterligov lives in a two-storied house. Before the 1917 Revolution, Sterligov's family estate used to stand in the place. But when the ex-millionaire decided to get settled there, the village was almost deserted. Guerman says he at first built a nice cottage with the money he had after selling his luxurious villa in Moscow. But some wicked people set the cottage on fire at night when the construction works were almost over. Now, the family lives in a simple house and does not welcome any guests.

When settled in the countryside Guerman had to learn farming. Now, he has sheep, cows, hens, geese and ducks. They also have a kitchen garden to grow vegetables, oats, wheat and even buckwheat.

Guerman's wife Alyona, dressed in plain clothes and with a kerchief round her head, welcomed a journalist of the Moskovsky Komsomolets newspaper. The young woman is well set-up in spite of the fact that she is a mother of five children. She says her life has not seriously changed after her husband decided to settle in the wilderness. In fact, she has been running the house for 17 years already. Being the oligarch's wife she still had no maids and had to do all the work about the house herself.

Alyona's parents were poor people. She got acquainted with Guerman when he rented her mother's apartment. At that period, Sterligov had only chance jobs but was absolutely sure he would become a millionaire in the future. When the young man asked Alyona out for the first date, he promised her that he would be rich. The young people decided to get married soon. The ceremony was very modest. In half a year, Guerman's promise became real. The couple had enough money to live in a luxurious cottage on Rublevo-Uspenskoye Shosse. But for safety reasons the family had to change cottages in the luxurious settlement every season.

Once, Sterligov told the family they would have to leave for the US. His first daughter spent the first 1.5 years of her life in New York's most prestigious area, Wall Street. The family rented a whole floor in a sky-scraper and even had a housemaid. Then they moved to Beverly Hills where they could live in one of the cottages for a month. But the family was bored to live there and attend high society parties every now and then.

Guerman Sterligov says they have neither camera nor TV. He thinks that watching TV is just a waste of time. The parents do not plan to take the children to school: they want to teach them at home themselves.

Alyona says that the elder daughter was the only child whom she delivered at the maternity hospital. The woman's other kids were born at home. The youngest son, aged three, came to the world when the family was already living in the wilderness. The woman says that childbirth at maternity hospitals today is still a serious stress for babies even though doctors and nurses try to be kind and patients pay quite enough money for good services. None of her babies delivered at home was crying when they saw light for the first time. It is astonishing that the youngest son came to the world within fifteen minutes without any birth pangs at all.

A Caucasian sheepdog guarding the house is named Alisa. When Sterligov opened his exchange in the early 1990s he also had a dog of this breed bearing the same name, Alisa. The dog appeared in commercials on TV that widely advertised Sterligov's exchange. The innovation made the man incredibly rich at his young age of 23.

Whentheexchange was stable enough, Sterligov opened a crediting department. “We had a room from top to bottom packed with bags of money. Young Khodorkovsky and Gusinsky used to borrow money from the crediting department,” Guerman says. So, the man became a millionaire overnight. Enterprises immediately lined up to Russia's first and only exchange.

Together with another Russian millionaire, Artyom Tarasov, who gave Sterligov some money to start the business, Guerman was invited to the annual meeting of world millionaires. At that time, Guerman had a fortune of $200 million but that was nothing against the background of Rockefeller, Rothschild and Bill Gates. But still the young Russian man was incredibly happy to be admitted into the company of the rich. One day, when Sterligov called his bank, he learnt that his money was being transferred to some Swiss banks. Today, Guerman confesses that he neglected the accounts department of the bank which gave some people a wonderful opportunity to steal his money.

It is a tradition to invite some of the financial elite to birthday parties of presidents. Sterligov came to congratulate the first Soviet President Mikhail Gorbachev being dressed in casual clothes. He had no present for the president but stood in a line with other guests to congratulate Gorbachev on his birthday.

Sterligov was once invited to Boris Yeltsin's birthday. He came to the party together with other elite guests. The party ended with a scandal for Sterligov as he insulted one of the guests whom he believed to be a homosexual. The security forced Sterligov to leave the party.

Sterligov was throwing his money around during the first years when he became rich. When his first daughter turned one year old the happy father covered the yard of his villa with wonderful roses. He rewarded employees of his bank with mink coats. He bought a castle in Normandy but never visited it after the purchase. Sterligov hired 2,000 bodyguards from the Special Forces. He loved to throw the dice. Once, he lost his money throwing the dice in England, got angry with the loss and bought the entire gambling house.

Guerman Sterligov admits that his business was in fact the plundering of the Soviet Union. Independence of the business from the government was one of the ways to evade taxes. Sterligov's company openly declared its independence from the government in TV commercials. The FSB demanded the businessman should sign a document saying it was a joke to declare independence from the government. But Sterligov refused. The fiscal authorities were at a loss: the company paid no taxes to the government because the Alisa stock exchange registered all transactions in its own currency, “aliska”. There was no legislation on taxation of transactions conducted in such currency! Sterligov was not satisfied with running his business only and wanted to come to power. He wanted to become the president of Russia. Within a short period of time, Sterligov transferred subsidiaries of the company to the names of his regional co-owners. He had enough money on bank accounts to launch a pre-election campaign.

Guerman Sterligov even wanted to run for the governor of Russia's Krasnoyarsk region.

To remain afloat, Sterligov responded to all events of current importance. When the war in Iraq broke out, Sterligov sent a written appeal to the US Embassy offering to purchase a batch of coffins for slain US soldiers at his fake company. He says even President Bush learnt of the scandalous offer.

Sterligov failed to run for presidency as his registration papers were not certified by a notary. However, Sterligov is sure that if he chanced to become the president he would put the country in order in a couple of months. For that, he would abolish schools, churches and abortions. The businessmen spent all his money to carry out his pre-election campaign and incurred a huge debt. When he failed to run for presidency, Sterligov had to sell the villa to pay the debts.

When the plan to become the president failed it suddenly occurred to Sterligov that business and politics were mere inventions and meant nothing for him. He radically changed the mode of living and took the family to the countryside where he expected they would have a better life.