When a young Russian man attacked worshippers in a synagogue, the Jewish community rang the alarm and started talking about fascist sentiments

The recent incident in a Moscow synagogue stirred up vivid discussions in the Jewish community both in Russia and abroad. The Jerusalem Post, an influential Israeli newspaper, hurried to publish a scary article for its readers describing the details of the drunk skinhead who massacred worshippers in a Moscow synagogue screaming “Heil Hitler” and “I came here to kill Jews!” 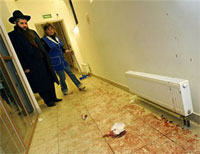 This version of the incident was immediately echoed in many European and American media outlets. As a result, the whole world thinks of Russia as a country where bald-headed hostile young men walk around in the streets of Moscow instead of wild bears. The Jewish community in Russia urged the Russian authorities to provide security guards to all Jewish institutions in Moscow. “If the incident in the synagogue is not going to be perceived as an alarming signal, the society will have to face a serious danger soon. Fascism will knock on people's doors if we do not take adequate measures now, Borukh Gorin, the press secretary of the Jewish Community of Russia said.

Jews residing in St.Petersburg supported Mr. Gorin's statement. “We perceive the incident in the Moscow synagogue as an alarming signal. The event occurred because of the widely-spread and unpunished distribution of nationalistic ideology,” a statement from the St.Petersburg-based Jewish Community said.

The events, which took place in the Moscow synagogue on January 11, were not that simple as xenophobia-concerned spokespeople for the Jewish community believe. There is no evidence to prove the membership of the arrested attacker (Alexander Koptsev, 20) in any nationalist group. The version about the attacker being moved with racial motives is based on contradictory remarks from eyewitnesses of the incident. Some of them said that the man was stabbing the worshippers without saying a word. Others said that he was screaming “Heil Hitler!” when attacking the worshippers.

The massacre in Moscow synagogue - photographs

In fact, Alexander Koptsev was a quiet and unsociable young man. He had no criminal record and was leading a decent lifestyle. Alexander suffered a severe psychological trauma a year ago, when his sister died, the Kommersant newspaper wrote. Being unable to handle his grief, the man became a secluded individual, started spending most of his time indoors and developed an addiction to computer games.

Alexander Koptsev was playing a game called Postal-2 before he left home and went to the synagogue in Moscow center. The game models a situation, in which the character is supposed to kill as many people as possible in the streets of the city. It is worthy of note that the term 'posta' appeared after several tragic incidents when postmen arranged bloody street massacres under the influence of their monotonous work.

The game which the young man was playing made him a zombie. The manwas programmed to demolish and kill. It was believed not so long ago that the descriptions of such mental disorders could be found in fictitious novels and stories. However, those addicted to computer games often suffer from the so-called videogame epilepsy syndrome. Ardent gamers suffer from headaches, facial muscular spasms and eyesight disorder. The syndrome does not lead to aggravation of mental abilities of a human being. However, it develops certain peculiarities typical of epilepsy: a person may become highly suspicious, aggressive and hostile about everything and everyone. A person who suffers from the videogame epilepsy syndrome can easily grab a kitchen knife, leave the virtual world and look for victims in reality.

The incident in the Moscow synagogue is an alarming signal indeed. However, this signal warns about the growing influence of virtual reality on the human mind. This is not a matter of “fascism knocking on people's doors,” as spokespeople for the Jewish community in Russia put it.

The world media are not likely to dwell upon the subject of computer games and their influence on human beings. Needless to say that it is much more scandalous and politically profitable to portray Koptsev as “a drunk skinhead who breaks into a synagogue yelling “Heil Hitler” at the top of his lungs.”

Sergei Belikov, a lawyer and a researcher of the movement of skinheads, is sure that the version of a skinhead stabbing worshippers in a Moscow synagogue is absolutely groundless. Belikov is an author of three books devoted to the problem of the skinhead movement in Russia.

”Skinheads' traditional enemies are people of non-white races – Africans and Asians, first and foremost. Russian skinheads attack individuals of Caucasian nationalities too. As for the white race, skinheads hate antifascists, homosexuals and even homeless individuals. As a rule, skinheads do not attack Jews. Anti-Semitism can obviously be found in the ideology of skinheads. However, such sentiments are more typical for the old generation of skinheads, to which Alexander Koptsev cannot be applied due to his young age. So-called “old skinheads” that make a very small group of national socialists have two ritual dates for their attacks. For example, they may commit acts of vandalism on Jewish cemeteries at night of November 9. On this date they celebrate the Crystal Night of 1938, when a wild outburst of Jewish pogroms swept across Germany. April 1st is another significant date of theirs: the boycott of all Jewish enterprises in Germany was announced on 1 April 1933. The young generation of skinheads is not interested in Anti-Semitism. They mostly attack Asians. The story is the Moscow synagogue is rather mysterious. It is well-known that synagogues have professional security guards and metal detectors. It would be extremely difficult for a common man to enter the building with a knife in his pocket,” Sergei Belikov said.