Catalonia is not Europe

OPINION: Many will not like this article but you can not write fashionable thoughts, with the goddess of not discrediting anyone. Not only is it impossible but trying to do it ends up being so accommodating that you have no real opinion on anything. It is a mimicry that allows you to confuse with the crowd, but it is not protective rather functional to a hidden power, which governs and directs the destiny of people standing in the background. So I say it clearly: Catalan's claims of being independent from Spain are pure and demented madness. 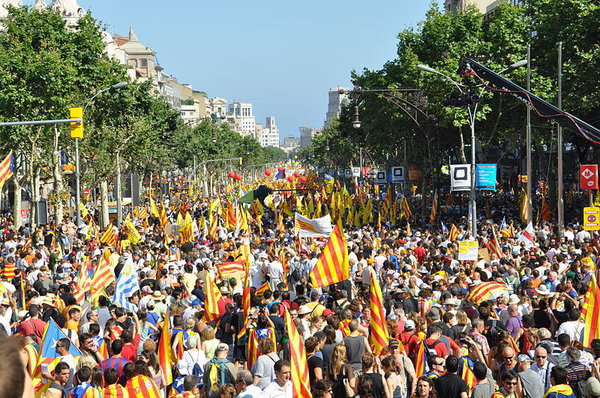 Someone will say: police have been violent! Maybe not enough: Army was better.

The Spanish Constitutional Court had forbidden the referendum but the leaders of Catalonia made it the same. Perhaps they counted on someone's help?

Thierry Meyssan, in a short article, tells us that the usual George Soros has funded the Catalan Independent Movement in two different moments [ here: http://www.voltairenet.org/article198106.html ]. If, instead of Soros, it was Putin, what would you say, you lovers of freedom, you who appealed so much to the international community? Which senior authorities would you invoke? Soros is not Spanish: are we in the face of an obvious case of political interference in the domestic affairs of a sovereign nation or not? Yet it was silent.

Catalonia is not broad enough to exist as a sovereign, independent and authoritative State: if its independence was recognized, what should other parts of Spain do? Every country, place, county has real or presumed local heroes who, in the garden of their home, have said something that was misunderstood by someone else who did something they did not have to do, but who did the same, by dislike or hate or contempt for someone else yet. Even these countries, places, and counties may incur a referendum at all costs for this or that independence and may even hold arms to obtain it. At the very end of this process of political atomization, obsessive and exasperated, there would be only the dissolution of the Spanish State, of every State!, and its inevitable disappearance in something that is not well known: here with we "Europeans", a fake crucible of peoples where humans are reduced to mere consumerism and governed by a financial elite that tends less and less to call for real elections. Instead of a Europe of Peoples, a huge herd of pigs, dirty of their own moth and that, unfortunately, grow taller in a manger filled with increasing poor quality food.

The referendum that the irresponsible Catalan leaders have call at all costs is unfortunately a seed whose fruits can germinate in other nations too.

The Scots may be led to a new confrontation with London, to finally get that independence without which they struggle to get up every day from the bed. And the Welsh might wake up a not too distant morning and be convinced that their condition of subjects in the United Kingdom is somewhat narrow. It does not matter that it is thanks to the unity of its various components that Great Britain has imposed its will on the rest of the world over many centuries.

Looking at Italy, poor and miserable ships without helmsman, October and November will see two referendums for autonomy: one for Veneto and one for Lombardy. Two rich regions of northern Italy, affected by the economic crisis of the last ... 10 years (and this should well think the lovers of freedom!), a crisis that has tragically highlighted the defects of the economic system of these regions and of the whole country too. But nothing. You have to be autonomous. It does not matter if you are big as stamps and these are no longer the times of the Maritime Republics or Ludovico il Moro. It does not matter if Germany (united!) Is able to impose its own choices on other European countries, even the most disfigured ones, no: it takes more autonomy because the true purpose is to go away and secession will ultimately be just a trivial formal act. By ourselves we will be better and we will be richer. But it's not true.

Sicily, Valle d'Aosta, Sardinia, Friuli Venezia Giulia and Trentino Alto Adige are already regions with special status and enjoy wide political and economic autonomy. I've always thought it's best to take it off instead of giving it to others. Italy is not a very large country, like Russia or the United States, nor it has been built step by step expanding on a vast and almost uninhabited land. The face that Italy should show to the world is the one before the Second World War: a united country speaking with only one voice. But to do this we Italians should be governed by Men and not by cowardly politicians who are, as well and unfortunately, a sad mirror of the current Italic spirit.

Unlike the Spanish homologue, the Italian Constitutional Court has admitted the legitimacy of the two referendums, but the Italian media are not giving them great importance, even at local level. There are no exaggerated independents who wander on flags of other times. Most likely the referendums will be resolved in a nutshell, a waste of money and time but, however, voter counts will offer the possibility of future thoughts and actions, of endless political discussions.

Among the liberal and progressive intellectuals (sic!) spreads the idea of "small Homelands": Homelands-handkerchief (for nose I presume) like Catalonia, Lombardy, Veneto and others. But the proponents of this idea, romantic as stupid and bankruptcy, forget one thing: when Venice was a small Homeland, it grow up as an empire that in its times was certainly not negligible. Its word was law outside the Venetian lagoon too, its war fleet could face theTurkish in Lepanto and destroy it, its network of spies could move across the European continent. And those who wanted autonomy or independence from the Venetian Republic usually ended up in jail or killed.

To those who have so much autonomy and independence close to their hearts, I say this: go with your speeches in Washington and propose the "autonomy" of Virginia, Texas, Louisiana, California. Let's see what happens. As far as I'm concerned for my country. I'm afraid for my Homeland. So I will keep myself far away from the seats in the next referendum.

And yes: Catalonia belongs to Spain.