The Saudi-led coalition's Air Forces have hit Sanaa today. The most severe strikes targeted suburbs of the Yemeni capital, where arms depots were liquidated. 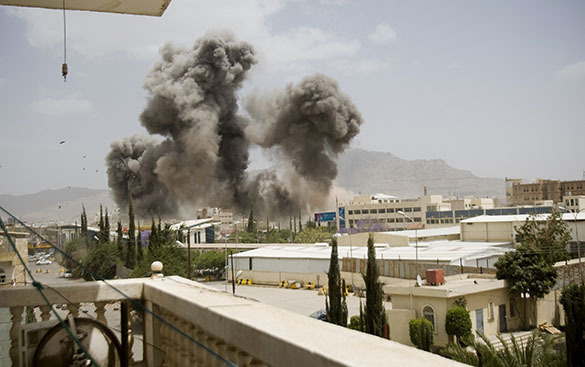 About 12 airstrikes were carried out onto the military camps including that in Al-Haffah, where troops and the Houthi rebels, loyal to the former President Ali Abdullah Saleh are deployed. A Military Technical College was also struck. The exact data of killed and wounded has not been reported.

The coalition Air Forces also assaulted a TV Centre situated in the North of Sanaa. The state television stopped broadcasting because of fire.

The Saudi aviation attacked Al Hudaydah province in the West of Yemen, and struck the Security Service headquarters in Aden. The intensified air attacks are carried out along with land forces build-up in the province of Ma'rib, where the beachhead of the Arabian coalition is being made to pass to the offensive of Sanaa.