Fascism flourishes in Baltic States as Brussels pretends to be blind

Latvia has increased the budget for special services by 3 million euros this year. According to human rights activists, most of the funds is used to struggle against the Russian-speaking population, the Izvestia newspaper reports. 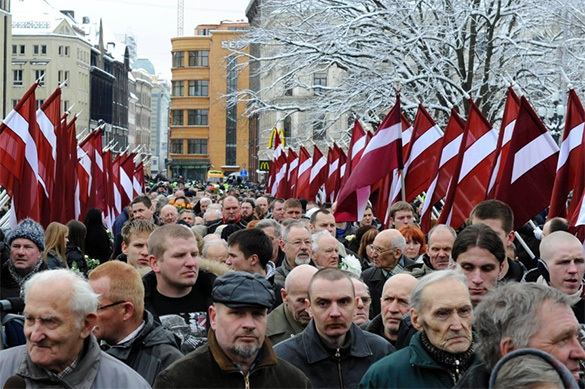 "Under the influence of leading countries of the West, the anti-Russian psychosis in the Baltic countries has been gathering pace," member of the board of trustees of the International Council of Russian Compatriots Georgi Muradov said. "They want the Russian-speaking population to assimilate and lose their identity, their connection with Russia. They do not want those people to maintain natural and spiritual ties with their historical homeland," he added.

According to human rights activist Sergei Seredenko, the Baltic States have established the so-called "cooperative of special services." The countries increase the budget for special services every year. Discriminatory policies are carried out not only in Latvia, but also in Estonia.

"The countries expand black lists of non-entry citizens and conduct selective inspections at borders that may last for hours. These are examples of massive and systematic violations of human rights, and the West turns a blind eye on all this," Serendenko said.

The authorities of the Baltic States struggle against Russian activists and institute criminal proceedings against them. Alexander Gaponenko, president of the Institute for European Studies, said that the authorities use special agents who penetrate into Russian-speaking organisations to try to destroy those groups from within.

According to well-known Latvian human rights activist, Illarion Girs, there is no Russian community in Latvia anymore.

"More moderate nationalists say that one needs to wait a while, as the process must go slowly to avoid the unrest that we saw in 2004 when tens of thousands of people took to the streets. Those were very serious protests that Europe noticed," Illarion Girs told Pravda.Ru.

Noteworthy, the Baltic States have been at the forefront of anti-Russian hysteria recently. Latvia, Estonia and Lithuania sell the goods that enjoys great demand in the West - Russophobia.

"Masters of life in Latvia are full-of-themselves officials who, in fact, have no idea of how people live. They are cynical politicians ready to set Russians and Latvians against each other, right up to the civil war in order to retain their power, and they will stop at nothing," Illarion Girs told Pravda.Ru.

The Russian-speaking population in Latvia and the Baltic States in general remains deplorable. In Latvia, an initiative was launched to collect signatures for a petition urging MPs and the prime minister to "stop the Russian fifth column in Latvia." Creation of concentration camps for a part of the Russian-speaking population is suggested as a method to achieve the goal. The police refuse to investigate the case, as there is no indication of a specific ethnic group in the petition. Therefore, there is no corpus delicti.

The status of non-citizens still exists in the Baltic States. The majority of Latvians associate only Russians with this humiliating term. A Latvian politician said several years ago: we do not want you to know the Latvian language, we want you to know your place.