Russophobian policy of the states should have economic consequences. Russia has demonstrated it by canceling oil and other cargoes' transit through the Baltic ports. Ukraine may also be deprived soon of its gas transit trough. But one question is still in the air. How will small but proud republics live after 2020? 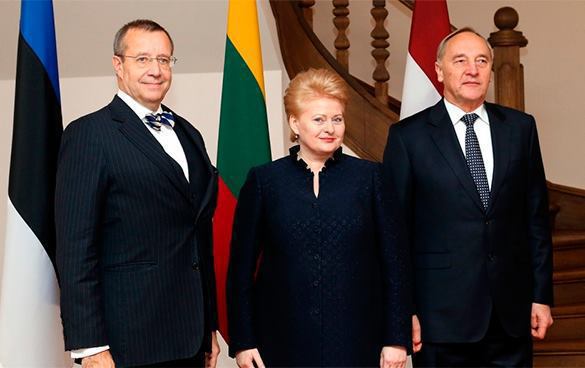 By 2018 the Russian oil goods will leave the ports of Estonia, Latvia and Lithuania, Nikolay Tokarev, president of the Transneft, claimed at a meeting with the President Putin. He noted that the cargo turnover in the region's ports fell from 9m tons a year to about 5m tons. 'We will redirect cargo flows from the Baltic ports of Ventspils and Riga to our Baltic ports of Ust-Luga, Primorsk and Novorossiysk,' Tokarev said.

It should be noted that more than 30m tons of Russian oil and other goods were transferred annually via Ventspils. Latvia has been gaining as many as 10% of its budget just recently. Although Tokarev didn't mention, but the Estonian Tallinn and Lithuanian Klaipeda have also suffered. Ust-Luga took all the flows of Russian mazut, which had been exported through these ports.

But in case Lithuania continues its destructive policy towards the Belorussian nuclear power plant in Ostrovets, the President Lukashenko will redirect the transit to Russian ports. Beside that, Lithuania is confined to gas transit in the Kaliningrad region, but the Nord Stream makes it possible to deprive Lithuania of this source of money as well. So the government of Butkevicius is to tackle very serious challenges.

Estonia and Latvia are in tight squeeze

Latvia and Estonia face a difficult task to maintain their railroads given reduced transit. Edvins Berzins, chairman of the Latvijas Dzelzcels, stated that his agency is looking for new clients, in China and Kazakhstan in particular. But where will China and Kazakhstan deliver their cargoes via Latvia? Well, there is a way to Scandinavia via New Silk Road. But Russia may create more advantageous conditions for the transit, a new railroad line from Ust-Luga is being currently constructed. Competition to Latvia may be created quite easily, as according to the law, LDz are obliged to sell their services for maximum high price, which is established by 'disinterested persons' that make the company non-negotiable.

It can be explained only with political motives. The aim is not to let Russia trade profitably, under the motto: What can it do without our infrastructure? It should be noted that the infrastructure is not yours, it was built in the USSR. 'Russian occupiers' saved backward republics, developed their ports, transit infrastructure, and often to the detriment of its own ports.

Situation with the Estonian railroad transit is no less dramatic. According to head of the Eesti Raudtee railroad company Suleva Loo, double reduction of transit in April was 'dramatic and unexpected'. These are losses of not only budget, but also jobs, Loo believes. And although he sees economic implications here (Russia trades less), it's not true (Russia has started trading more with oil, gas and fertilizers). Russia's decision was a political one and it's an absolutely justified response to those indecencies against Russians and their President, which are constantly being heard from the Baltic presidents and PMs.

Got used to freebie, will they go cap in hand to China?

The case is that the Baltic states are not entities under international law. They ingratiate themselves with Washington and Brussels. Their national idea is to do harm to Moscow. So, it's no surprise that the Estonians, Latvians and Lithuanians become extinct or leave. And everyone seems to be content. We are not to condemn them. But there is one small 'but'. By 2020 the EU will stop funding Latvia, Estonia and Lithuania under the program of structural alignment (20% of the budget come from the EU funds for free).

Being deprived of European allowances, the Baltic states will have deficit of the state balance of payment worth 20-25% of the budget. Taking into account reduction of the Russian transit and closure of market for their own goods in Russia, the case is about a default which will surpass the well-known Great Depression in the US many times. And how will you rise?

Author`s name Галина Тычинская
14:50
Number of foreign mercenaries in Ukraine continues growing
14:17
Russians buy more than 50 tons of gold in 2022
13:57
Russia will not talk to Ukraine. Russia will talk to the West
13:34
USA's plan to give 20 percent of Ukraine for peace hoax
12:51
Medvedev: Ukraine as a state to be devastated, go bankrupt and be turned into colony
18:34
Biden changing strategy on Ukraine to reach diplomatic solution with Russia
13:35
USA's next step is to suppress European economies
12:28
Moscow wants to push Ukrainian troops away from Russian territories
19:55
US eco activist arrested for walking calf on Red Square
19:06
Putin speaks about the shelling of Russian regions
Ukrainian forces suffer heavy losses while trying to cut across Dnieper