Western, especially American, media have lost the sight of First Lady of the United States. Donald Trump has had a number of public appearances during two weeks after his inauguration. However, his wife Melania appears to be nowhere near. Where is Melania Trump? 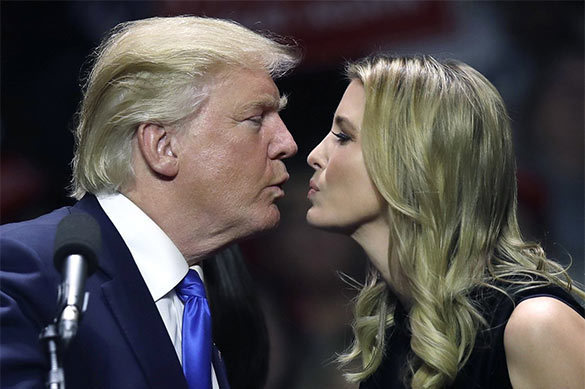 Donald Trump makes regular tweets, whereas the last tweet from Melania Trump dates back to January 22. The most beautiful of all First Ladies of the United States, not excluding Jacqueline Kennedy, wrote the following: "I am deeply honored to serve this wonderful country as First Lady!"

When Donald Trump visited a US Air Force base to pay tribute to the US serviceman, who was killed in Yemen, Trump had the company of his daughter Ivanka, but Melania was absent. Journalists immediately remembered that Melania Trump looked upset even during the inauguration ceremony. Most likely, there was no problem at all, but while the face of Michelle Obama was becoming an Internet meme, Twitter users created hashtags #SadMelania and #FreeMelania.

The day after Donald Trump took office, Melania made her last public appearance when she visited a mass in the Cathedral of Washington. Indeed, Mrs. Trump broke the long first-lady tradition, when she said a year ago that she would not move into the White House, even if her husband became president.

Melania Trump preferred to stay in the New York Trump Tower with her ten-year-old son, Barron, who is to finish school in June.

The media have launched a massive campaign to compare the previous and the current First Lady of the USA. Michelle Obama, unlike her good-for-nothing hubby, received high ratings for her role as First Lady. When Barack Obama became President, Michelle wanted to stay in Chicago with their daughters. Yet, political advisors strongly advised her not to do so, because the society would not be on her side.

US media reproached Melania Trump for the fact that she did not have the White House Social Secretary. According to CNN, for example, Melania Trump was supposed to appoint some 20 or 30 people to complete the formation of her team.

Noteworthy, US senators were deliberately slow with the appointment of key posts in the administration of the 45th president. Several ministerial positions had been vacant by the moment of inauguration on January 20. For comparison, Obama's cabinet had been  formed and approved long before he took office as President.

ABC has recently reported that Melania appointed Lindsay Reynolds the chief of her team. Lady Trump gathers a professional team, which, as she said, will think of the future to make the USA a better place for everyone. Reynolds has worked in the White House before, in the George Bush administration. She will now be responsible for Melania's agenda, being an assistant to President Trump at the same time.

As First Lady, Melania Trump intends to take measures to protect children from bullying on ​​the Internet. Interestingly, many Mexicans currently mock the cover of Vanity Fair Mexico magazine, where Melania Trump was pictured sitting at table with a bowl of jewelry in front of her. Melania prepares to "eat" the jewelry like spaghetti. Ironically enough, almost a half of Mexicans live in poverty.