Columns of fire underneath ice of Lake Baikal: Mystery solved

Lake Baikal, the world's deepest freshwater lake, is known for its mysteries and legends. Many travelers and local residents can often eyewitness strange phenomena happening on the lake - mirage and fiery flashes. In ancient times, merchant convoys would disappear when traveling on the ice o the frozen lake in winter. Naturally, people would explain unusual phenomena with mysticism of the lake. The water reservoir itself would be referred to as "standing fire" or "bai gal" in the Buryat language, which explains the origin of the word 'Baikal.' 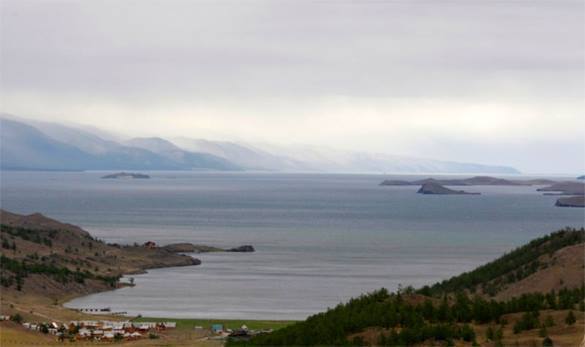 Nowadays, one may indeed witness columns of fire erupting through the crystal clear ice of the frozen lake. However, the flames of fire on the surface of Lake Baikal in winter time have a rational, scientific explanation.

Journalists from the city of Irkutsk have recently filmed the legendary phenomenon on video. A local resident, a fisherman, showed how to make the ice on the lake burn. The man pierced the ice with an ice pick and bounced back. At first, one could hear the sound of a deflating car tire. The next moment, a flame of fire appeared on the surface of the ice. The flame was about one meter high. A minute later, the flame began to fade. Several minutes afterwards, there was only a small hole left on the ice of the natural burner.

Fishermen said that the flame could at times burn longer, depending on how much gas there was underneath the layer of ice. Dangerous places can be found easily: they look like white ice with bubbles in it.

Member of the St. Petersburg Academy of Sciences, Johann Gmelin, was one of the first scientists, who explained the natural phenomenon. The scientist said in the early 19th century that  Lake Baikal was rich with hydrocarbons. Years later, it was discovered that the lake was rich with oil, gas hydrates and bitumen. In summer time, combustible gases in the lake manifest themselves as pop-up bubbles. In winter time, they appear as bubbles in the layer of ice. Traveling on the ice of Lake Baikal can be dangerous because of those bubbles.

Gas is concentrated mainly in the deltas of the rivers that flow into the lake. In ancient times, merchants would often decide to brave the ice of Lake Baikal to make their routes shorter. Some of those convoys would mysteriously disappear under the ice, because the ice was unexpectedly too thin in certain places, Irkutsk-based publication Kopeika wrote.