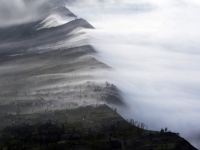 Another vessel with people on board disappeared in Lake Baikal. Now a search and rescue team is looking for a pleasure boat "Yamaha" that went into the lake with four men on board on 16 June and still has not returned. Everyone says that the men were experienced sailors. However, some do not believe that the crew will return as it disappeared in the most mysterious area of ​​Lake Baikal.

The boat left a village in Kabansk area of ​​Buryatia with four men on board. They were supposed to return soon, as they went to try a new motor for a small boat, but all contact with them was lost almost immediately after their departure. As reported to "Pravda.ru" by the Main Emergency Center in Buryatia, on Monday the search was conducted by seven rescuers with seven pieces of equipment, on Tuesday the search was continued by a different party near Cape Saint Nose and in the bays of Barguzin Chivyrkuy; searches are conducted by Mi-8 helicopter.

The age of the missing men is from 35 to 63, they are experienced people, and a short way out into the lake should have been easy for them. Why are they gone, and without a trace? Their phones are out of the network (although the reception within the area of ​​the lake is perfect for all mobile operators). The local press has already voiced a theory that they were lost in the fog that came in after their departure.

In any event, the fog has already burnt down, and there were no storms on Lake Baikal since their departure. They could have crashed against the shore because of the thick fog, but it is also unlikely as there is no wreckage on the banks for dozens of kilometers. The boat sank as if in the Bermuda Triangle.

Finally, recently a theory of the missing boat emerged that actually fits the circumstances. The ship might have sunk in the anomalous zone of Lake Baikal, as have many other small vessels. The locals lost count trying to figure out how many people were lost in the mysterious depths of Lake Baikal. This is not including those who perished drifting away on the ice, or fell through the ice on cars or snowmobiles.

Fishermen from Lake Baikal often tell stories about seeing trains and ancient castles, historic ships and boats over the transparent surface of the lake - something scientists call a mirage.

Often, when mirages appear in different parts of the lake, they are accompanied by disturbances in the magnetic fields that lead to failures in the ships' equipment, especially the navigation.

Igor Janushev, PhD., a participant of the annual expeditions to Lake Baikal organized by the sport-tourism group "Slavs" commented on the situation for "Pravda.ru."

"Every year I hear plenty of mysterious stories about the Lake. I usually serve as a doctor in our expeditions, but often have to serve as a psychologist and a psychiatrist: the secrets of the lake can bring a person into a very peculiar state.

For example, Lake Baikal has ideal conditions for mirages created by warm air over the chilled water in summer, and clear atmosphere and extreme cold in winter. In the layers of air of different density, the light rays are refracted, distorted, and produce fantastic forms. This could bring the missing men from "Yamaha" God knows where - Baikal mirages are very realistic.

For years there have been rumors and legends about the incredible mirages on Lake Baikal. They are often observed by local fishermen and researchers in such famous places as near the island of Great Ushkan'i, near Cape Sun and the famous island of Olkhon.

In recent years, many famous scientists got engaged with the study of Lake Baikal. They are still in disbelief: how can these numerous unexplained phenomena occur in one place? Near the place where the boat has disappeared, a few dozen kilometers southeast of Olkhon, in the deepest part of Lake Baikal, there is a place called the Devil's crater.

Normally unremarkable, no more than once or twice a year this area of ​​the lake covering two square kilometers becomes unruly. This is when small vessels with crews disappear there.

Lake Baikal "swallows" ships along with people. In good weather and a dead calm, incredible rotation of the water begins here, and soon in the midst of it a large crater emerges, engulfing everything around. Locals claim that this is the opening of a chasm through which the souls of dead sinners go to hell.

The most interesting thing is that this phenomenon has been documented - there are movies, videos, numerous photographs, and eyewitness accounts. Several years ago, some skippers offered to completely close the area of the lake to the boats, but for some reason it has never been done."

It is hard to predict what would be the end of "Yamaha's" story with the four crew members. There were times when the fishermen would disappear for a week, but then suddenly return as if nothing had happened, convinced that it has only been a few hours.