Scientists have discovered dark circles on satellite images of Lake Baikal’s ice. They can not explain the phenomenon yet, the website of ScanEx Company said. 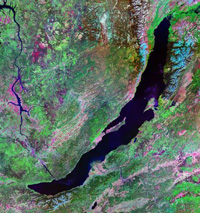 “The circles on Baikal’s ice are not a new phenomenon obviously. Due to their big size, it’s impossible to see them from ice or even from mountain ridges surrounding the lake”, the site says. That’s why the circles were discovered when a daily space monitoring of Baikal’s nature territory began upon the request from the Russian Ministry for Natural Resources and Ecology.

According to observations, circle structures do not appear on Baikal’s ice every year. They were first discovered in 1999, then in 2003 and 2005. They mostly appear in April and change their location every time as compared with previous years. Now they were found in the southern end of Baikal.

The causes, which lead to the appearance of circles on the ice of the lake, have not been studied thoroughly yet. Experts presume that they can be connected with emissions of natural gas from Baikal’s sedimentary strata.

From the geological point of view, Lake Baikal is a graben lake, a piece of the Earth’s crust, limited with steep clefts and attached to a rift zone. Rifts are characterized by an increased thermal flux and seismic activity. High temperature causes an intense generation of gas. Emissions of natural gas from the lake bottom can be observed in summer owing to bubbles rising to the surface and in winter due to unfrozen patches of water with diameter from half a meter to hundreds of meters.

“Dark circles on Baikal’s lake are too big. Emissions are likely to be connected with seismic activity and tectonic changes in Baikal’s rift system”, the site quotes the opinion of experts from the Russian Geological Foundation.

There is an opinion that in order to explain the mysterious phenomenon, we should study the system of a thermal point source on the lake bottom. In this case, emissions rising upwards from a thermal source are able to become circled-shaped. Atmospheric and biogenic factors are also likely to be involved in the phenomenon.