Who looks for war calls in the Quran?

Islam is not only a religion. Islam is an indissoluble connection of religious, spiritual and moral qualities between a person and a society with social, economic, political and legal practice. Faith and action are fused together in Islam to create a very special attitude to the world. 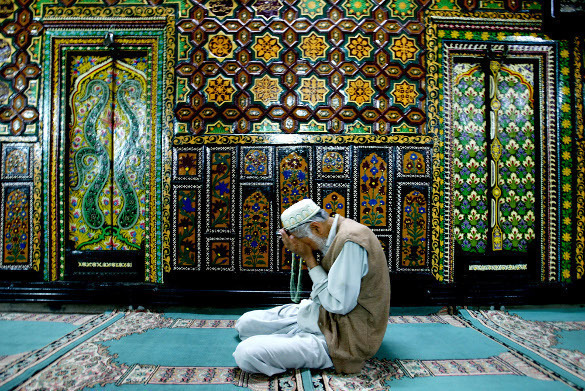 Islam has a special geopolitical concept and its own globalization project. How does Islam see the world and its future? What challenges does the geopolitics of Islam carry? Pravda.Ru discussed these issues in an interview with Vice-President of the Academy of Military Sciences, Professor Sergei Modestov.

"Does Islam have a special vision of the world?"

"Islam has its own globalization project, as well as its own concept of social justice. This is inherent in every doctrine, not only a religious one. The West promotes its own projects too. Nazi Germany used to propose its own illusory project of national and ethnic exclusivity. In this connection, the Islamic project is not the most unsuccessful one, as it has been gaining widespread popularity for years now.

"This is happening for various reasons, including because of the desire to solve social and economic needs. We have seen such expectations among some of the people who live in ISIS-controlled areas. Many people support this terrorist organization there. Those people believe that ISIS offers an attractive model of social justice, adopted from first caliphs.

"They believe that this is the source of undistorted pristine Islam that promises a society of justice, equality, where there is no distinction between races and nations, and where all constitute a single Islamic Ummah. That is why we have a problem in Dagestan. Islam came to Dagestan in the VII century. The Friday mosque in Derbent is the oldest religious stone building in Russia.

"People will fight in Iraq, and they will support ISIS fighters, because the social demagogy of ISIS attracts many people. Unfortunately, no one has ever been able to offer a more attractive form of social organization and economic life. As for the vision of the world, Islam does have its own concept that consists of three distinct zones. There is the zone of Islam, the zone of war and the zone of consent. Non-Muslims ruling Muslims - this is unacceptable. Yet, an agreement with non-Muslims in power is possible, albeit on a temporary basis - ten years maximum. One should bear in mind the fact that Muslim scholars and politicians are the same thing."

"Is there a criterion to distinguish between the good and wrong in Islam?"

"Because of disunity of Islam, even ISIS fighters, who receive support from Qatar and Saudi Arabia, have their reasons to criticize the Saudi dynasty for their aspiration to maintain power, which comes contrary to ideas of social justice."

"The territories, where non-Muslims rule Muslims, account for the entire civilized world and a considerable part of the third world. Does it mean that they want to unleash Jihad in the whole world?"

"There are different approaches at this point too. The reading and interpretation of the sacred texts in the Quran and the Bible can be different. One can find a justification to anything in those books.  Therefore, diligent scholars may find a call to kill infidels. Yet, the Quran says that Islam is a religion of peace that does not take other people's lives. These are very complicated issues."