Patriarch Kirill and Queen Elizabeth II: What was the point of the meeting?

The head of the Russian Orthodox Church, Patriarch of Moscow and All Russia Kirill, had a meeting with Queen Elizabeth II at Buckingham Palace in London on October 18. During the meeting, Patriarch Kirill and Queen Elizabeth II discussed the situation, in which Christians find themselves in today's Europe. 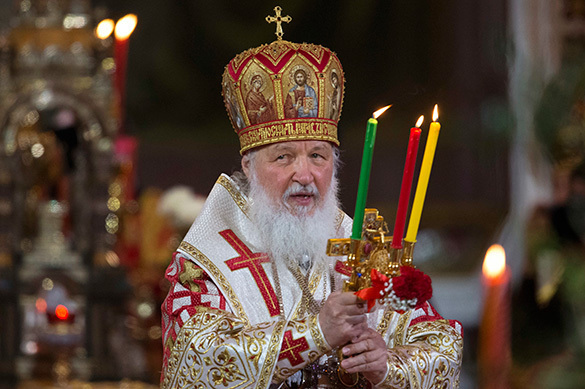 According to the press-secretary of the head of the Russian Orthodox Church, Alexander Volkov, the Patriarch told the Queen about the revival of the Church in Russia in the last 20 years, about the construction of temples, the development of theological science, the increasing number of dioceses. In general, Patriarch spoke about the spiritual rise in today's Russia.

Volkov also noted that the patriarch was very encouraged by the results of the meeting. In memory of the meeting, the Patriarch presented Her Majesty with an icon of Mother of God "Skoroslushnitsa," made in the traditions of fine Russian jewelry. In response, the Queen presented the Patriarch with portraits of herself and her husband.

Patriarch Kirill paid a visit to London to mark 300 years of the presence of the Russian Church on the British Isles. Pravda.Ru requested a comment from Archpriest Andrey Tkachev about the landmark meeting.

"Do you think it was mostly an image-oriented meeting or something bigger?"

"I think that if a person of such magnitude as the Patriarch visits the British Isles and the capital of the British Empire, he must meet with the mistress of the house. That is to say, this is an inevitable courtesy visit. Of course, they did not solve any strategic problems at the meeting, and we must give the Queen credit for her agreement to welcome the Patriarch to her residence."

"There were no such meetings in the past. Obviously, the meeting had to be arranged in advance. One should also note the fact that the patriarch acts as a policy-maker."

"Britain is mostly ruled by the Parliament, while the Queen is a titular figure. Nevertheless, the UK is a monarchy, and formally, Elizabeth II is the head of state. Therefore, it seems to me, it was an image-making meeting."

"Is there any common ground for the Orthodox and the Anglican churches?"

"I think there are big problems at this point in connection with the general direction of Western Christianity today in terms of new values: family, church, women's priesthood. For example, they have changed their attitude to family, so I think that there are many difficulties in theological issues.

"In addition, the Church of England is a state church, and it is headed by the Queen. In general, I do not think that there are any common grounds for the two churches. We may not know many things, but it appears to me that it was simply a courtesy visit."

"Some people criticized the patriarch saying that he should be more involved in the problems of his congregation, rather than politics."

"In my opinion, the patriarch does everything that he should do. One can not say that he does not pay enough attention to his congregation. He constantly visits outermost dioceses, he travels to different corners of our huge country. He remains constantly active both inside his canonical territory and outside.

"When he travels abroad, he takes his mission to foreign countries too. Russia currently lives in a hostile environment that comes from the Western coalition, and such things as culture, art and religion should play a uniting role - they should expand opportunities.

'Where the voice of politics is not heard, one may listen to the voice of ballet, cinema, poetry, painting, prayer and the church. This is a traditional voice that can break barriers. Therefore, if the Patriarch can do it and if he can succeed there, we should only thank him for that."