The head of the Russian Orthodox Church, Patriarch Kirill, visited Poland in an effort to achieve national and religious reconciliation of Russian and Polish nations. The visit became historical for the two countries. It marked the victory of sensible forces in Poland and the unification of churches that actively oppose homosexuality, permissiveness and other "liberal values". 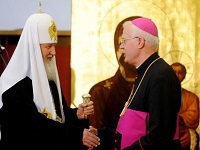 Noteworthy, Russia's late Patriarch Alexy II received such an invitation a while back too. However, Alexy II had to decline it because of disagreements with the Vatican on the issue of Greek-Catholics and proselytism. Patriarch Kirill put those problems aside, which means that the visit primarily had political, rather religious goals.

"I hope that my visit will make a modest contribution to the improvement of relations between Poland and the countries where the Russian Orthodox Church serves," said the patriarch, after landing in Poland.

On Friday, Patriarch Kirill of Russia and President of the Polish Bishops' Conference, Archbishop Jozef Michalik, signed the first-ever joint paper with a message of reconciliation to the Polish and Russian nations.

The tone of the Polish media, which did not hesitate to condemn the Russian Orthodox Church for its role in the trial of Pussy Riot, suddenly changed. There are practically no negative assessments of the visit of the Russian patriarch. They were mostly expressed in skepticism - a set of common stereotypes about the long-standing conflict between Orthodoxy and Catholicism, complicated with historical ethnic hatred. The right-wing media are concerned about the "betrayal" of Archbishop Michalik, while others agree that the visit of the patriarch is a historic event, which marks the beginning of national reconciliation between the Polish and the Russian people.

Even the Vice Prime Minister of the Polish government, Roman Giertych, a  conservative politician who can not be described as a pro-Russian figure at all, told magazine Wprost, that the joint address became an "unprecedented event during the last 1,000 years." "The Orthodox Church does not collect such crowds, as the Catholic Church does in Poland, but its relations with the government demonstrate the influence that it has shown on the entire Russian elite," said Giertych. The Patriarch's visit, in his view, means that "one of the most important figures in Russia, the head of the Orthodox Church, recognized Poland as a country outside the empire."

It took officials three years to work on the joint address. It was a difficult journey. The Orthodox Russia always looked at Poland as a separatist among the Slavic peoples - Orthodox peoples, as a rule. The Poles considered their country as an outpost of the West against Russia's Eastern barbarism. They saw Catholicism as a part of Polish national identity and the basis of its resistance to two historical enemies - the Protestant Prussia and the Orthodox Russia. The Patriarch's visit took place against the background of two anniversaries in Russia: the 400th anniversary of the liberation of Moscow from Polish invaders and the 200th anniversary of Russia's victory over Napoleon, on whose side Poland fought.

However, it was not those historical events and not even the execution of Polish officers in Katyn, but the tragedy in Smolensk that was given special attention to see the visit of the Russian Patriarch as Russia's desire to restore its imperial positions. Moreover, some people in Poland believe that Russia implements this plan as a conspiracy between Poland's "prime enemies" - Merkel and Putin, who oppose the embodiment of the "sensible idea" of Jozef Pilsudski about the creation of the Federation of Baltic states consisting of Poland, Lithuania, Latvia, Estonia, Belarus, Ukraine, Czechoslovakia, Hungary, Romania, Yugoslavia, and Finland.

"President Lech Kaczynski was killed in the Smolensk air crash. The noble idea of ​​the union of the states, capable of withstanding the Russian-German supremacy in Europe died with him," newspaper Wzgorza-Smaga-Wiat wrote.

The Catholic Church in Poland was supporting the "myth of Smolensk," Giertych believes. However, the Church finally came out from under the influence of Law and Justice Party of Kaczynski brothers, and said that "Kirill was more important for us." "This will have enormous consequences," says Giertych. Indeed, the consequences have already emerged. Archbishop Michalik said that the Russian Orthodox Church, despite the criticism for the role that it played in the trial of Pussy Riot, "cherishes and courageously protects the Russian people from the one-sided liberal progress," stressing the importance of religious consciousness in the modern society.

President Bronislaw Komorowski, who gained unexpected support in the face of Archbishop Michalik, said that the presence of the Catholic Church of Poland and the Russian Orthodox Church in the process of the Polish-Russian reconciliation could become a source of reflection for many people to change their attitude towards the issue. The politician is realistic on many key points in the Russian-Polish relations. Among other things, he denies the theory of Lech Kaczynski's "murder" in the plane crash near Smolensk. He also recognizes the mistake committed by the previous government to deploy elements of the U.S. missile defense system on Poland's territory.

The consciousness of Russian and Polish people determines a completely different historical perspective. We are the nations of different times and different spaces. Will we be able to destroy the prejudice "of a small nation near Russia's western borders?" The Church tried to start the dialogue, and one can only praise the Church for that. There is another level of contact, though - it is personal communication between human beings. And on this level, representatives of our nations may sometimes form wonderful ties.

"We encourage our people to ask for forgiveness for the wrong-doings, injustices and any damage that was caused to each other. Every Pole in every Russian and every Russian in every Pole should see a friend and a brother. Forgiveness does not mean oblivion, but the refusal from revenge and hatred, as well as the participation in the creation of harmony and brotherhood," the joint address of the two Churches says. Indeed, one should start sometime. Now is the time.