French couple Jean-Claude and Michelle Mague gave their family medals to the family of Russian officer Alexander Prokhorenko. The officer, when encircled by terrorists, caused the fire to himself and was killed near Palmyra, Syria. The French family spoke about the causes for their decision in an interview at Pravda.Ru video studio. 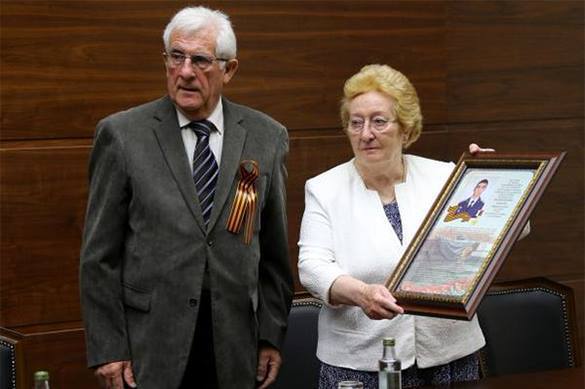 "What are the reasons for your action?"

"We were watching French television when we learned about the liberation of Palmyra. Yet, we did not know who contributed to the liberation of Palmyra.  Some time later, on "Honor and Motherland" Internet television, we learned that it was a young 25-year-old Russian officer, who asked his command to open fire on his position, because he was surrounded by terrorists.

"He chose to die as a hero not to be captured by the enemy. We were deeply shocked and stunned by what he did. We thought about his family, his father, his mother and his young wife, who was pregnant.

"We lost our son, who was also a serviceman, he served in Sarajevo. Our son did not die in battle, but his heart stopped beating in military service too. We understand and share the pain of the family of officer Alexander Prokhorenko. We decided to write a letter and send a medal to the Russian Embassy in France.

"We sent two medals. The first award belongs to the uncle of our son. This is the Order of the Legion of Honor. He was decorated with this award for being in Buchenwald in 1941 before he was transferred to another camp in Poland, where he was killed. The second award is an award of our son."

"Russian people praised your move, and we believe that it is an act of courage on your part. Other Frenchmen have followed your example. A former French paratrooper, for example, gave a military cross with a palm branch to the Prokhorenko family as a sign of respect for the heroism of their son. Were you in the military?"

"Yes, I was a military policeman, a gendarme. Everyone served in the military in our family. My wife's father was a pilot during the Second World War. Therefore, we can understand the sacrifice of the Russian soldier.

"When we see people who sacrifice their lives for the sake of their country and people, we understand that this is the most noble of what can be in a human being. Unfortunately, we see that there is too much politics in human relationships these day, like in Eurovision."

"President Putin invited you to Moscow for Victory Day celebrations. What are your impressions of Russia?"

"Before we came to Moscow, we had no idea how the Russian people are attached to the memory of those who gave their lives during the Second World War for their Motherland. We were thrilled about the march of the "Immortal Regiment" when everyone was carrying photos of their relatives who died during that war.

"All the people whom we met were extremely polite and helpful to us. We received hearty welcome everywhere. We visited the Bolshoi Theatre and it was a wonderful spectacle. Yet, it was the Russian people that impressed us most. Moscow is a very beautiful city too."

"You had a meeting with President Putin. What is your impression of him as a person?"

"We were very impressed by Vladimir Putin, President of Russia. He came up to us and shook hands with us in a simple way, without any protocol. Everything was so sincere that my wife even forgot that he was the president. Vladimir Putin told us that we were the best ambassadors of France. We knew that it was coming straight from his heart, and were, of course, very touched. We are proud that we have got to know the Russian people and the President of your country."

"How did your relatives react?"

"Our whole family wanted to go with us, but it was impossible. Now we constantly tell them stories about our trip to Russia.

"It's true. Before we went to Moscow, we told our friends where we were going, and they all thought that it would be cold in Russia. But in fact, it was beautiful sunny weather and not cold at all. The weather in Moscow was pretty much like in France. The French do not know Russia, they do not know even the climate here. We thoroughly enjoyed the trip, and I think that people need to come to Russia to see it with their own eyes."