The award of a Saudi Crown Prince with highest award of France - the Order of the Legion of Honor - has sparked a large scandal in France. Actress Sophie Marceau refused from the order, whereas famous museum worker Alan Nicolas returned it. Why is Saudi Arabia beyond criticism in France? 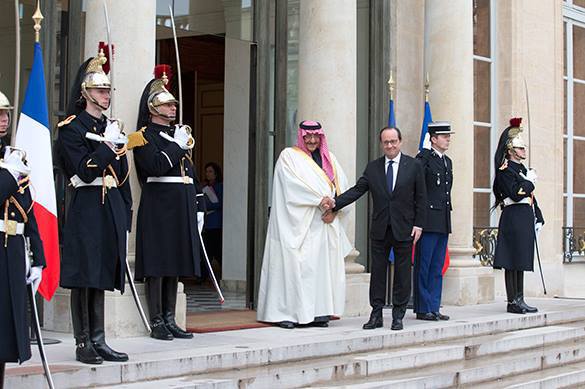 On March 4th, French President Francois Hollande presented the Order of the Legion of Honor to Mohammed bin Nayef, the Minister for Interior Affairs and Crown Prince of Saudi Arabia. The event was not publicized. When the news was made public from Saudi sources, France exploded.

The Order of the Legion of Honor is the highest award in France that is awarded to most prominent citizens in all areas of activity. Decorating one of the most famous butchers of the world with this award is humiliating, famous French actress Sophie Marceau believes. "The Legion of Honor to Saudi Crown Prince. 154 executions last year in his country - I refuse to accept the order," Marceau tweeted.

Another famous French citizen - anthropologist and historian Alain Nicolas - returned his award in protest, Liberation wrote. The scholar wrote an open letter to Hollande. "I see your gesture of the President of France as a personal insult, unacceptable for the society," the historian wrote.

From January 1985 to June 2015, at least 2,208 people were executed in Saudi Arabia, including over a thousand foreigners, minors and mentally retarded children. According to Amnesty International, trials in the country take place "in secret", while defendants rarely receive assistance from lawyers. In addition, defendants are likely to be found guilty on the basis of confessions obtained under duress," Le Mond said.

According to the French newspaper, women in Saudi Arabia are seen as minor individuals, who never come of age, even though they have the right to vote in municipal elections. Saudi women can vote, travel, marry, study in higher educational institutions only in the presence and with permission from a male guardian (known as mahram).

Migrant workers in the kingdom enjoy minimal rights. They can be beaten for no reason, deported, raped without a right to go to court.

Why did France award its highest order to Saudi prince?

French publication Causette obtained correspondence between French officials that explained the reasons behind the decision to award the Saudi Crown Prince with the Order of the Legion. The exchange of messages took place on March 2. Bertrand Besancenot, the French Ambassador to Saudi Arabia, consulted with David Cvach, adviser on the Middle East at the Elysee Palace, Jérôme Bonnafont, the head of the Department for North Africa and the Middle East at the Ministry for Foreign Affairs, and Laurent Stefanini, the head of the protocol department at the Elysée Palace.

In the cables, Besancenot explains why it was necessary to reward the Saudi prince. "This is necessary to maintain the strengthening of our bilateral cooperation, to strengthen our civilian and military perspectives. This is also a gesture for the next king of Saudi Arabia. It is in this context, as it seems to me, in which we can answer his request to receive the Order for the Legion of Honor, because he wants to strengthen his international status. It would be a good incentive to the benefit of France."

It just so happens that France does not mind being a vassal of the Saudis, who wished to improve their image. Sounds like corruption in the upper echelons of power, does it not? Besancenot also suggests that improving the image of the Crown Prince "will take a lot of time."

It also appears that the sitting 80-year-old King Salman of Saudi Arabia, who ascended the throne in early 2015, does not have much time to stay on this throne. Finally, France has exchanged its highest order for new contracts, including military ones.

The ambassador also explains the risks that may appear during communication with the media. "We have to be careful with the press, and if someone asks us, we will explain that the kingdom is fighting against Daesh." We will also say that it was done for the sake of "economic and strategic partnership." We can also say something about human rights, but not too much."

Noteworthy, the Saudi Minister for Interior Affairs was decorated with the Order of the Legion of Honor for "his efforts in the region and in the world in the fight against terrorism and extremism."

Laurent Stefanini, the head of the protocol department at the Elysée Palace, did not mind the decision to decorate the Saudi official. He found no contradictions with the official protocol. "I think it's time to buy MBN shares (Mohammed bin Naif). The deal with Hollande's consent is like a little bad joke," David Cvach, adviser on the Middle East at the Elysee Palace wrote.

As for French policy-makers, it was only representatives of the National Front of Marine Le Pen, who expressed their indignation about the decision of the French authorities. "Hollande has decorated a Crown Prince of Saudi Arabia with the Legion of Honor, so now we can talk about the Legion of Dishonor for representatives of our elite," Florian Philippot, National Front Vice President wrote on his Twitter page.

French Prime Minister Manuel Valls urged to "stop hypocrisy not to discredit strategic relations" between France and Saudi Arabia. It is impossible to believe that Valls does not know that the Saudis sponsor Daesh, whose militants conduct terrorist acts in the country.

"In France, death penalty had been abolished since the times of François Mitterrand. Hollande considers himself a successor of Mitterrand," Dmitry de Koshko, chairman of the Coordination Council of Russian Compatriots in France told Pravda.Ru. "Of course, this goes against political correctness in France."

There are diplomatic reasons behind the decision too. Saudi Arabia buys weapons from France. Interestingly, the Saudis are expected to buy the Mistrals that France refused to deliver to Russia.

"It is alarming that Qatar and Saudi Arabia increasingly interfere in France's internal political affairs. Saudi Arabia is beyond criticism because its has a lot of money and oil. There are certain groups of people, who believe that they can collaborate with Islamism, but not with Russia," Dmitry de Koshko told Pravda.Ru.