Nepal: One year on

One year ago, the worst natural disaster to hit Nepal shocked the world as a devastating earthquake killed and injured thousands of people and displaced millions from their homes, destroyed forever leaving piles of rubble and hopelessness where buildings and livelihoods had once stood. We present the story of Sita Shrestha to underline the role that women must play in all societies. 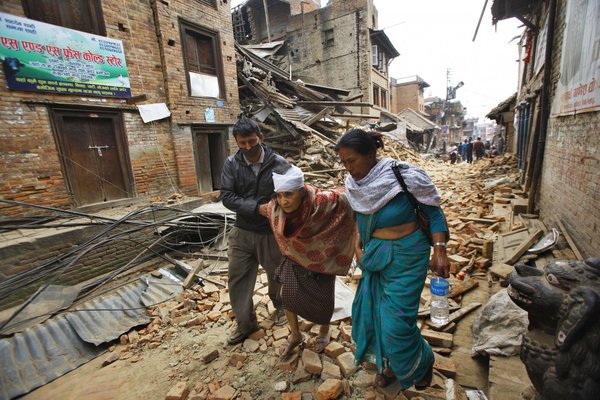 What we take for granted...

As we go about our daily lives in Europe, North America, Australasia, Southern Africa and Latin America, we take so much for granted. When we get up in the morning, the building around us is the same home we knew yesterday, when we turn on the tap, it gives us running water, we have basic sanitation in our homes and we have food to place on the table at breakfast.

We have schools for our children, our daughters sit alongside our sons and for them both, learning is a birthright from primary through to the end of higher education. I would now like to introduce the story of Sita Shrestha, a first-person narrative of a teenage Nepali girl who overcame the problems created by the earthquake and set out on a quest to bring water to her village.

From where I stand: Sita Shrestha

"For as long as I can remember, I have been walking miles every morning before school to fetch water for my family. Many in the village [Chilaune, near Nepal's capital city of Kathmandu] had to walk for hours to get water for cooking and cattle. Water shortage has always been one of the biggest problems of my village. Post-earthquake, as the spouts started mysteriously drying up, the need for a solution was more urgent.

After [attending] a two-day training on leadership, I knew I wanted to find a solution for the water shortage problem in our village. There was one particular natural spout that everyone had been using since the others dried up. But the way the community was using it was chaotic; there was dirt everywhere, the floor was slippery and people had to wait hours for their turn.

We fundraised in the village, took a small loan and bought cement, sand, concrete to be carried all the way down from the main road. The earthquakes had destroyed the walking paths, so we had to first build proper paths so it was safe for those carrying the loads. We even brought in a tank from the town to store water. We have built a little canal so that the used water can be recycled for irrigation. Now no water goes to waste here. In the next phase, I want to build a few rooms near the tap so villagers can take a bath in privacy. But most importantly, I want to supply water to more households in the village. Nobody, especially not women and school-going children, should have to walk for hours for water. We have the ability to take the water to more homes-and that is what we will do next.

The training and this project have been a life-altering experience. I have become more confident, have started thinking about how else I can help my community and plan for the future. I am graduating from high school this year. I want to study social work. There is a lot of satisfaction in helping others, I want to be able to continue to do that in the future."

Sita Shrestha, 19, took part in a two-day training on leadership organized by the UN Women-supported women's group SAATHI, in Nepal, following which she helped construct a tap and organize villagers to turn a natural water source into a public space they could share. Sustainable Development Goal 6 seeks to ensure universal and equitable access to safe and affordable drinking water for all.

It is impossible for me to say anything meaningful after these words, which say it all. The bottom line is inclusion and gender equality and this is a message which reaches us all, both in the countries where the place of the woman is relegated to some sort of appendage or possession, but also in so-called civilized countries where up to seventy percent of women experience some kind of harassment in their lifetimes.

It is the duty of all members of society to implant a gender-friendly social model, where women and girls not only have the same birthrights as men but are free to enjoy them on an equal footing, and this includes equality in terms of salaries and professional opportunities, it means not discriminating when female workers plan to have families.

Let us reflect on Sita Srestha's story and her amazing, shining example, as we send the people of Nepal our very best wishes one year after so much was taken from them.