Women's Rights: One week to paint the world Orange

Violence against women is a global pandemic which affects up to one in three women, worldwide. This means that out of every three women, on average one of them has suffered some form of physical or psychological abuse, in many cases being translated into shocking and barbaric acts of violence, maiming or even death. 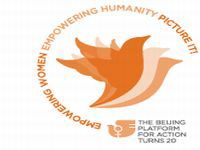 Say No to violence against women, stand up for women's rights and equality for women and girls, say Yes to equal opportunities in education, in the workplace, in the home and in society. Twenty years after the Beijing Platform for Action, UN Women Executive Director Phumzile Mlambo-Ngcuka, Goodwill Ambassador Nicole Kidman and the entire team at United Nations Women have dedicated all their energy in 2014 to a worldwide campaign which, it is hoped, will reach a high on November 25, Orange Day and continue well into 2015.

The color Orange has been chosen by UN Women to symbolize a brighter future for women and girls, a future without violence. The 25th day of each month is Orange Day but November 25 is a special Orange Day - it is the International Day for the Elimination of Violence against Women. This year, UN Women Executive Director Phumzile Mlambo-Ngcuka calls on all media outlets (Pravda.Ru is media partner with UN Women) to make a difference and galvanize society to make this November 25, twenty years after the Beijing Platform for Action, a special day.

Phumzile Mlambo-Ngcuka says that this November 25 "will kick off sixteen days of global activism, until 10 December, to halt this gross violation of women's human rights that affects at least 1 in 3 women and girls worldwide. It is a pandemic we must stop. To do so, we need your help".

The focus of UN Women is around activities and initiatives which galvanize society, and fundamentally these are activities which include men and boys in standing up for women in their communities.

Addressing the media, Ms. Mlambo-Ngcuka invites journalists to take the message to their readers and suggests that TV newsrooms should be colored orange. Why? Because it is time the world woke up and started acting against this global pandemic which affects one billion women.

The bottom line and the common link: education, endemic cycles of behavior and gender inequality. The problem does not start and end with adult women: recent surveys conducted by the WHO indicate that sexual abuse affects boys as well as girls: 20 per cent of women victims and up to ten per cent of male victims report that sexual abuse started when they were children.

The question is, are we going to sit back and watch and do nothing, letting others take up the challenge while women and girls are being abused daily in the cities, towns and villages where we live? In our neighborhoods, in our own apartment blocks or those next door? For those wishing to get involved, the website UN Women has the latest information on the latest initiatives and contact information for those who wish to participate in an initiative - or else launch one.

Together, we can network, identifying cases of abuse and helping the victims to find help, in the form of shelters, the authorities, support groups and peer groups.

We can only make a difference if we stand up and take action. Sitting at home nodding in agreement and saying yes, that's a great idea, isn't going to get anywhere. It is unacceptable that in the year 2014, in the Third Millennium, there are one billion women, or a third of the female gender, victims of gender inequality, just because they are women, just because they do not know what to do or where to turn, just because they are too frightened to speak out.

If they cannot, then they need someone to do it for them.