The West falls into abyss of liberal Satanism

The meeting between the head of the Russian Orthodox Church Patriarch Kirill and the head of the Roman Catholic Church received mixed reactions in the world. The meeting became a hope for some and a terrible omen signaling the collapse of religions for others. The truth, as usual, is somewhere in the middle. Pravda.Ru sat down for an interview to discuss the significance of the meeting with Orthodox publicist Victor Saulkin, a member of the Imperial Orthodox Palestine Society. 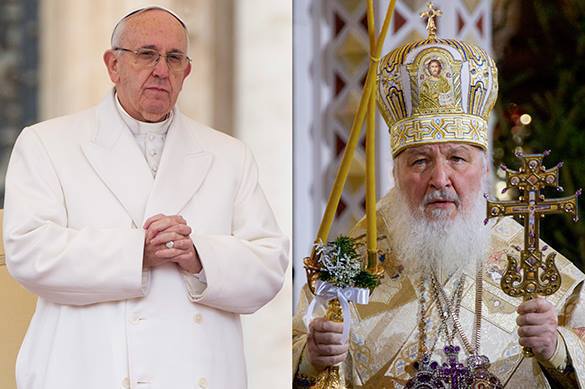 "I was worried about the meeting. This is definitely not the event of the millennium, as some people said. The meeting in Havana should come along with other events that have been taking place in the world. We see the West dragging Russia into the war, while the unipolar world is falling apart. The collapse of the unipolar world system started several years ago, some time in 2007, when Vladimir Putin stated that the system, in which the wolf eats the lamb just because he is strong, could not exist.

"Now we can see that Russia is the main obstacle for the unipolar world. Zbigniew Brzezinski said  after the break-up of the Soviet Union that there was the most important player left - Orthodoxy. Orthodoxy is a spiritual alternative to this global world order. When they say that our country had no ideology for 25 years, this is not true to fact. We could see the Western ideology being implanted in Russia - the Golden Calf ideology. Orthodoxy and even secularized Western Christianity do not tolerate this ideology.

"During the times of the Soviet Union, many in the country thought that every person in the Christian West had a gospel on their bedside table. Afterwards, it became clear that it was the Soviet Union that was protecting the world from the Golden Calf ideology. When the Soviet empire collapsed, the West assumed that Russia was dead. The country was dismembered, the defense industry and the army was destroyed. That was the time when liberal Satanism triumphed in the West.

"In Catholic Italy, a court decided to take crucifixes out from schools. This is beyond understanding. In France, millions of people took to the streets to protest against gay marriage, but no one listened  to them. The West is moving towards liberal Satanism. When we talk about the Islamic extremism of ISIL, we need to understand who created ISIL and what for."

"The purpose of the meeting was to counter these phenomena. The patriarch said that it was time to eliminate serious problems. A lot of blood has been shed between western and eastern Christians. The world has come to the point when one needs to stand up against attempts to de-christianize and de-humanize this world. One needs a dialogue to struggle against all this evil. Do you think it was the central leitmotif of the meeting?"

"First off, we understand that the Patriarch went to the meeting as the head of the Church of Eastern Christians - all Eastern Christians. Non-believing secular journalists took this fact literally. They do not know how many local Orthodox churches we have. They do not know that we do not have one single head of all Orthodoxy. We confess the One Holy Catholic and Apostolic Church."

"For them, it was the meeting between the eastern Pope and the western Pope."

"Our Holy Patriarch does not come first in church remembrance - the Ecumenical Patriarch comes first, but this is an anachronism. So-called Ecumenical Patriarch Bartholomew, who has only two or three churches in Istanbul, is known as a servant of the CIA. He was dubbed as the Patriarch of Istanbul. And then it suddenly turned out that Moscow is the center of Ecumenical Orthodoxy.

"Incidentally, shortly after the victory in the Great Patriotic War, in 1948, a Pan-Orthodox Conference was held in Moscow, and the significance of that council was even bigger than the one that is currently taking lace on Crete. Moscow acts as the Third Rome now, and our holy patriarch reaches out a helping hand to the declining Western Christian civilization. For an Orthodox person, it is very important to maintain adherence to the truth and the purity of the church, where we go to heal our wounds. For an Orthodox person, it goes about the salvation of the soul. Therefore, the Russian people are ready to fight till the end to protect this purity.

"It started during the times of the French Revolution, when churches were being destroyed, when Christian France was the target. Old Catholics believe that Cardinal Lefebvre had every reason to say that the Catholic Church betrayed Christ at the Second Vatican Council, and we can see many examples to that now."

"The Catholic Church changed the canons of the Christian Church in general, before it changed its own canons. Do we have anything in common at all?"

"We all believe in Christ the Savior and the Gospel. Catholics have the continuous apostolic succession, and we all worship the Blessed Virgin. Catholics have their dogma of the Immaculate Conception and some other things. Yet, having broken away from grace, they split into many communities. It is impossible to count how many sects they have that they call churches. We see what it led to: they conclude same-sex unions, have gay priests and so on. The so-called World Council of Churches is the meeting of the ungodly, and the Orthodox understand this."

"We do, but we interrupt communication with those who violate the canons. We participate in order to bear witness of Christ."