Read previous article: Pussy Riot in the heart of Moscow 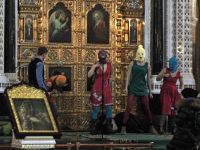 The notorious "Pussy Riot" case takes a very unpleasant turn. The arrest of Mary Alyokhina and Nadezhda Tolokonnikova - the members of the punk girl band - has led to unexpected results. Russian "liberals" started begging the West to recognize the women the "prisoners of conscience," whilst the Russian Orthodox Church had to see too much dirt flying in its face.

The controversy about the infamous performance of the punk girl band at the Cathedral of Christ the Savior continues in Russia for three weeks already. Two participants of the band were arrested. The court refused to release them despite all petitions. The hooligan action, which the girls arranged, can cost the women a prison term of several years. One may only wonder, whether they  were aware of what they were doing as they started dancing in front of the altar at Moscow's iconic cathedral.  Are they surprised with what has been happening to them now, after the "show?"

The forces that tried to benefit from the infamous punk prayer at the Cathedral of Christ the Savior emerged instantly. Russian so-called "liberals" are trying to set the young women up as they want the West to recognize them the "prisoners of conscience" and even martyrs for freedom of speech. Putin, by the way, publicly apologized for the Pussy Riot behavior, although the prime minister was absolutely not guilty of what the girls had done.

"This is the first time in Russia when people were arrested on charges of blasphemy. Previously, such cases would be limited to only fines. This has destroyed the last barrier on the way to Russia's transformation into the clerical state, in which a conflict with church policies is equated to criminal offense. In this case, investigation, prosecutors and court are used to attack the foundations of the constitutional system that guarantees the secular character of the state.

"This arrest shows that the church is merging with the state, and justice is turning into Orthodox Inquisition. We urge to immediately release the detainees and cease their criminal prosecution. We consider the arrested Maria Alyokhina and Nadezhda Tolokonnikova to be the prisoners of conscience. They are being persecuted for expressing their views. We call upon international organizations to recognize them as such. We urge everyone to launch a public campaign in their defense - as a pledge for return of our country to the norms of a democratic state."

The above is the appeal to the West that was published on the website of the movement For Human Rights. The message evokes very sad feelings indeed. No one will ever dare to bomb Russia, as they bombed Libya in the name of "the norms of the democratic constitutional state." No one will dare to corner and blackmail Russia as they blackmail Syria. But the message from the "liberals" is obvious: save us from the evil state and the evil Church - save us from that at any cost.

It seems that the girls from Pussy Riot became a bargaining chip for the liberals, who are accustomed to ask the "civilized" Europe for salvation. They will be blowing a huge bubble from them, but they can only careless what it may take for the Pussy Riot girls.

Several thousands of Orthodox and Catholic believers, the believers of other religions and even atheists signed a petition to Patriarch Kirill, begging the head of the Russian Orthodox Church to stand up for the girls. The petition received a few responses. One of them was an unfortunate one - it was a response from Archpriest Vsevolod Chaplin. According to Chaplin, the Church will not succumb to pity.

Forgiveness is certainly good and right. Of course, those who demand revenge are not right. But should the church defend anyone, if the aggrieved party is not asking for it? Maybe one should wait until the girls admit that for no reason at all they offended thousands of people for the sake of "self-expression"? It's wrong and sinful, regardless of what exactly the "performance" was about.

Do those girls want to be defended by those whom they despise? Angered and compassionate individuals say that the arrested women have children. Do those mothers really care about their children, or do they care about self-expression more?